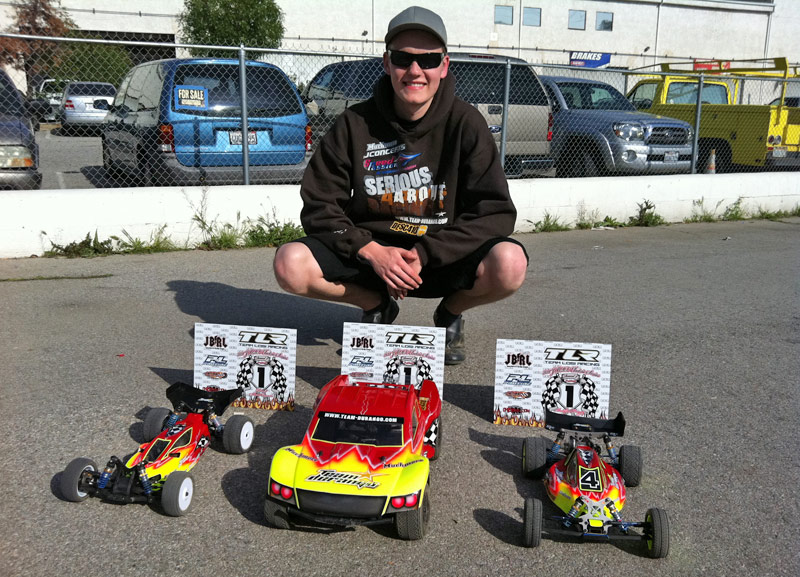 The 1st Round of the 2011 JBRL Electric Series was held at Hotrod Hobbies, California. 280 drivers turned out for the event. Team Durango drivers Hupo Hönigl and Jörn Neumann attend to participate in 2WD, 4WD and Pro 4WD Short Course. Gerd Strenge was also their to support both drivers. It was a very long day of racing with 2 Rounds of Qualifying and 1 Final. In 4WD it was a close battle between Hupo and Jörn for the TQ spot. Jörn took the TQ spot. In Pro 4WD Short Course the brand new DESC410R was the car to beat. Again Jörn took the TQ, 2nd place Hupo and 3rd Chad Bradly. In 2WD Frank Root took the TQ spot by 1 second over Jörn with the Prototype DEX210 and 3rd Mike Truhe. 4th place was teammate Hupo also with the Prototype DEX210. All Finals were 6 minutes long. First was the 4WD final. Hupo had a very bad start. Jörn lead the final from start to finish, Hupo pushed very hard and with some very fast laps he finished 2nd after his poor start. Both with the DEX410 2010 spec. The Pro 4WD Short Course final was up next and Jörn had a good start and built up a healthy lead of a few seconds after the first lap, because of a start crash behind him. Hupo had a close battle with Mike Truhe for the second spot. In the end Jörn take the win with the brand new DESC410R by a half lap over 2nd place Mike Truhe and 3rd Hupo Hönigl also with the DESC410R. One of the last finals was the 2WD A-main. In the first lap Jörn overtook Frank Root after the triple jump to take first. He ran some consistent lap times to build a gap back to 2nd place. In the end Jörn took the win, 2nd place Jonny Wachter and 3rd Brian Mcduffie. Teammate Hupo finished 8th after a crash at the start. All cars running great and we are know making the trip to Phoenix for the Cactus Classic.