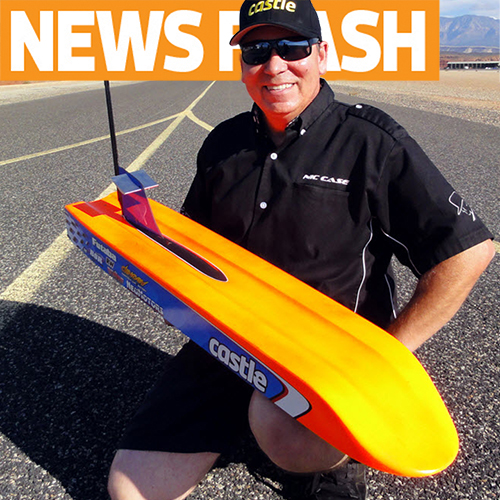 Nic Case has been a familiar face to RC fans ever since 2006 when RC Car Action put together the first “World’s Fastest RC Car Challenge,” an event that saw Nic post a then-astounding 134.4mph run. In the eight years since then, Nic has continually refined his Castle-powered, Futaba-equipped “RC Bullet” design in the quest for 200mph, and he finally achieved his goal this past weekend. His record-breaking 202.02mph run can be viewed below, and as usual for Nic, he has made certain all the documentation is in place for his achievement to become an official Guinness World Record.  What’s under the hood? Nic is notoriously tight on details about how he goes so fast, but we’ll see what we can find out… History was made on October, 25th 2014 in Saint George, Utah. The R/C Bullet designed, built and driven By (me) Nic Case achieved a top speed of 202.02mph !
Not bad for an amateur – with good friends, family, great sponsors and off-the-shelf electronics! The chassis, body and tires are all custom, stemming from myself and my teams imagination. There where many people that have helped throughout this journey. And as it turned out, Tracy, Josh and Mak (the people that were there at the beginning) were there to witness this historic speed run. I appreciate everyone’s support immensely.
I’ve learned so much during this journey, from aerodynamics to people.
It’s funny how expectations can change how goals are enjoyed. The longer it takes – the less of a surprise it is when the goal is achieved. But sometimes, uncharted territory unfolds this way…. You can’t succeed if you don’t fail.
Now, the R/C Bullet has consistently earned the top speed title.

This one’s for you Chris,