Like Ron Burgundy, we editors and authors of Radio Control Car Action like to think we’re “kind of a big deal.” But we know the truth. When it comes to the many manufacturers of radio control models, parts, and accessories, the real experts they want to hear from isn’t us, it’s you. The customer. The guy forking over his hard-earned cash to go a little faster, run a little longer, or hang a little tougher. That’s what makes the annual Readers’ Choice Awards so important: you’re the ones handing out the trophies. All we did was count the votes. So let’s get to it: we give you the 18th Annual Radio Control Car Action Readers’ Choice Awards! 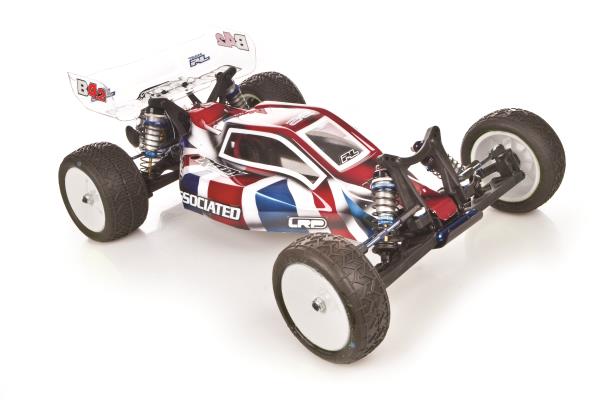 The B-machine is back on top! Team Associated has owned the Electric Buggy category with 14 wins in the 18 years that we’ve been holding the Readers’ Choice Awards. And why not? It’s easy to get votes when you win races, and no 2WD buggy has done that more often than Associated’s B-series. The B4.1 is the reigning IFMAR World Champ (as piloted by Ryan Cavalieri), and exactly zero jaws will drop if the B4.2 repeats the feat this year. 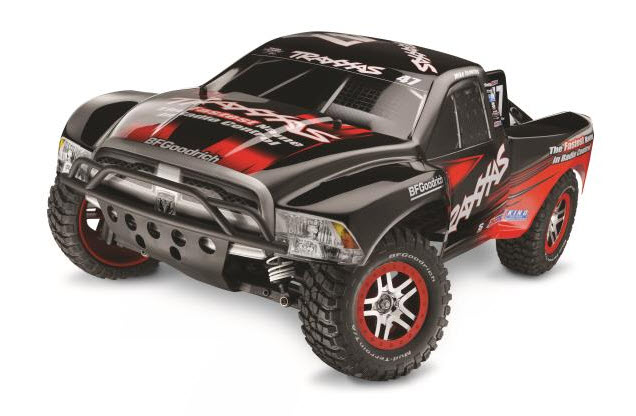 Traxxas’ “2010 Truck of the Year” winner continues to be the go-to all-around fun truck for lots and lots (and lots) of you, and why not? It’s good for over 60mph on a 3S LiPo, tears up a track with 4WD, and tears up everything off the track even if it’s covered in mud, snow, or water. Plus, it nails scale short-course looks and there’s aftermarket gear a-plenty to make your Slash 4X4 truly your Slash 4X4. 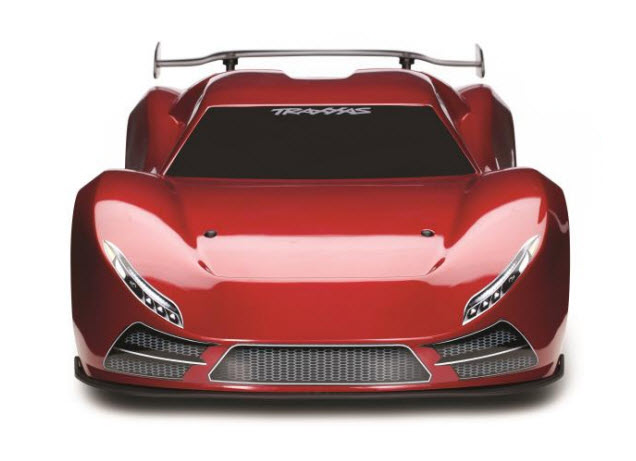 Who doesn’t want a 100+mph ready-to-run car? In addition to easily posting honest-to-gosh triple-digit top speeds, the XO-1 features the TQi radio system with Docking Base. Slide in your iPhone or iPod touch, download the Traxxas Link app, and the XO-1’s installed telemetry sensors let you see just how far past 100mph the XO-1 went. It ain’t cheap, but as the saying goes, speed costs—how fast do you want to go? 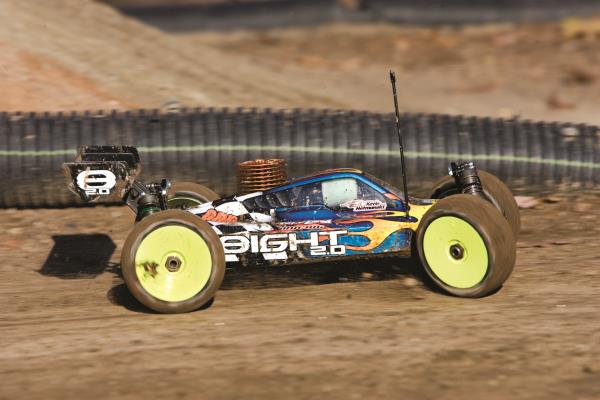 You can get the 8IGHT 2.0 as a Losi ready-to-run or a Team Losi Racing roller, but either way, you’re looking at a buggy that has gone undefeated since it debuted in 2007. It’s hugely popular, it wins races, and it’s the choice of The Drake—what did you expect? One thing not to expect is to see the two-point-oh in this spot next year though—now that the 8IGHT 3.0 is here (see the Radio Control Car Action Pro Racer special for a full review!), odds are you’ll see it here in 2014. 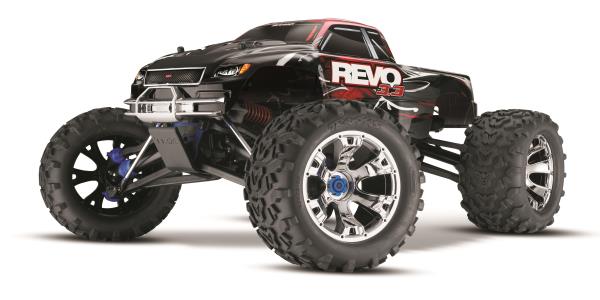 Readers’ Choice Awards, 2004. The new Traxxas Revo hits the scene and promptly wins the Nitro Truck category. Repeat for the next nine years. Traxxas’ breakthrough big truck has yet to be toppled from its perch as your undefeated champ, and the mighty Revo still reigns supreme as RC’s most innovative nitro monster truck. In 2013 trim, the Revo 3.3 is the best-equipped version ever—it even includes a full suite of telemetry sensors and the TQI transmitter with Docking Base for iPhone/iPod touch connectivity.

That’s two in a row for the Nitro 4-Tec, and five in total since 2007. As the fastest small-block RTR tourer available (over 70mph, you’re welcome) and arguably the easiest to run (thanks to electric starting and Traxxas’ rock-solid TRX 3.3 engine), the Nitro 4-Tec combines supercar styling, high-velocity excitement, and genuine piston-pounding power in a high-performance package that’s hard to resist (and easy to vote for). 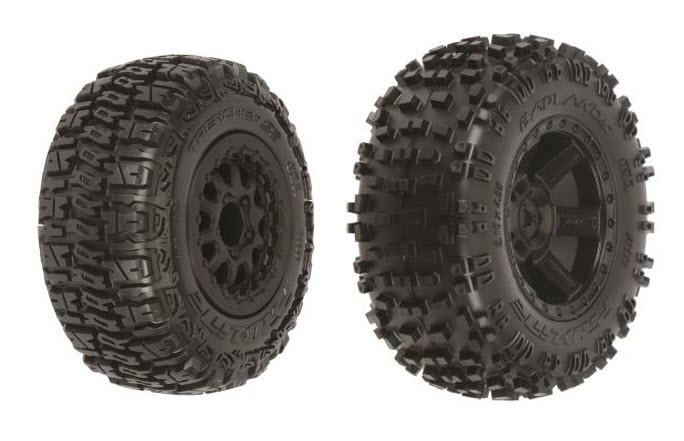 If you guys couldn’t decide between the Trenchers’ scale-like style and the Badlands monster-moto knobs, why should we? Your tire votes were an almost perfect 50-50 split between the two styles, so we’re giving the trophy to the two of them. Consider it presenter’s prerogative. Both tires are available unmounted, but we’re showing the mounted versions, with Badlands on Desperado wheels and Trenchers on PL’s Renegade design. 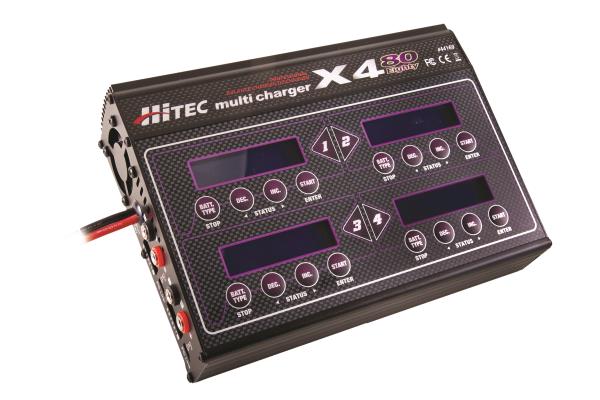 There are two things in RC that can never be too fast: cars, and chargers. No one wants to wait a nanosecond longer than they have to before firing the next freshly charged pack into their favorite machine for another run. And so, it’s easy to see why you picked the Hitec X4—it can juice up four packs at once and juggle chemistries and capacities as it does the job. That means more time terrorizing the cat and less time watching the clock. 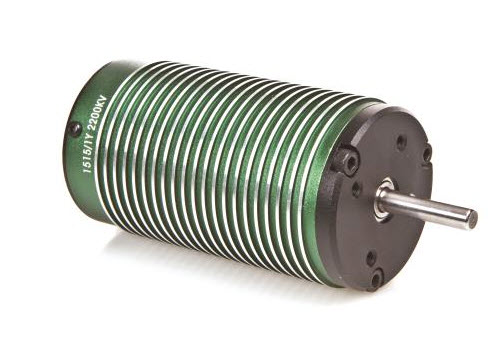 When Castle Creations first announced their Mamba Monster brushless system, we all sat on the edge of our seats waiting for the day it would come out. When it finally did, it took brushless monster truck performance, threw it out the window, ripped the window off the house, and bulldozed the house over a cliff. Its never-before-seen power and speed won our hearts and clearly did yours as well, and that’s why you voted it to the top for 2013! 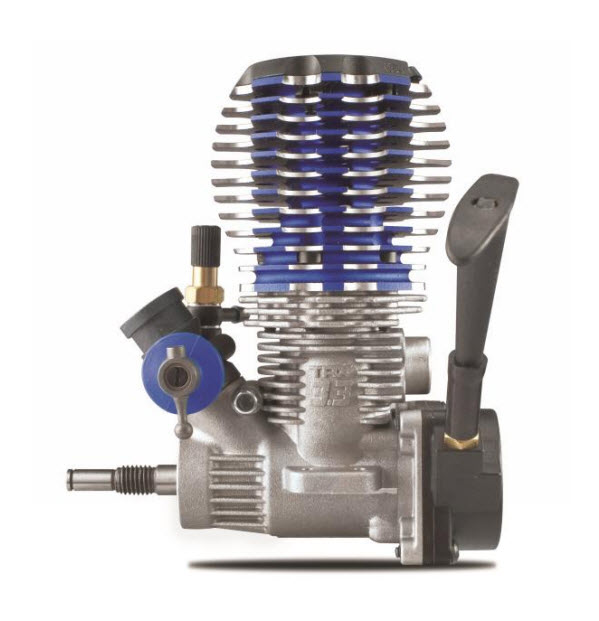 We’re betting most of you voted for this engine because you have this engine. The TRX 3.3 powers nearly every one of Traxxas’ nitro-burning machines, and does so with rock-solid reliability proven in countless cars and trucks and what is likely millions of hours in total run-time. It’s got the horsepower to push the heavy Revo and T-Maxx models past 45mph, and packs race-spec features including a composite slide carb, integrated pilot shaft, and high-flow porting. Add the convenience of electric starting, and you’ve got a fourth Readers’ Choice Award trophy for the TRX 3.3 Racing Engine. 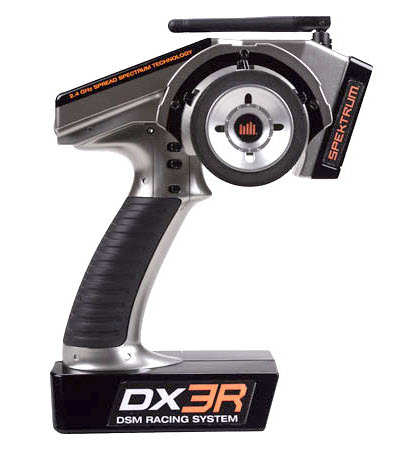 Spektrum put 2.4GHz on the map in 2005 and took the Readers’ Choice “Best Innovation” award that year. In 2008, the DX3R transmitter debuted and became your Transmitter choice, and Spektrum’s flagship radio has gone undefeated since then. This pro pistol has all the tuning features you need to get the most from your machine, all accessed via a large, easy-to-read screen and logical menu system that makes it easy to change up settings. The DX3R is popular, proven, and your pick for 2013. 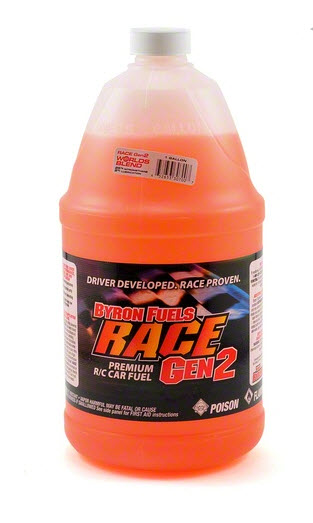 That’s six in a row for Byron. Hopefully they they’ve got a sturdy trophy cabinet, since their latest Readers’ Choice Award will be joined by an IFMAR World Championship trophy (thanks to Cody King’s 2012 1/8 scale off-road title) Ryan Lutz’ Silver State hardware, Melvin Alston’s Pro Mod Funny Car record, and too many other wins to list. 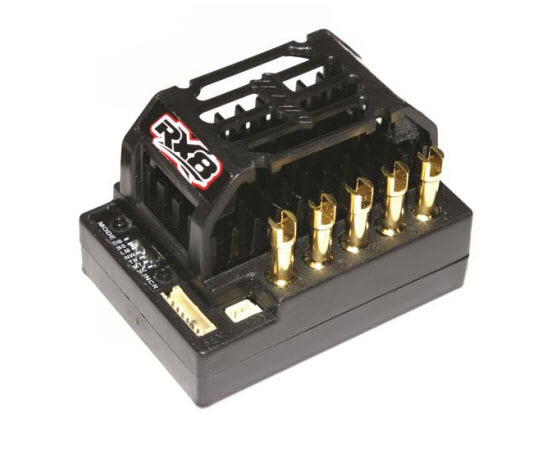 The Tekin RX8 has become the go-to speed control for off-roaders around the country. With features like Dual Drive, PC interface programming and the ability to handle today’s high output motors and batteries, the RX8 takes speed control performance to a higher level, and its combination of robust circuitry and small footprint made it your top choice. 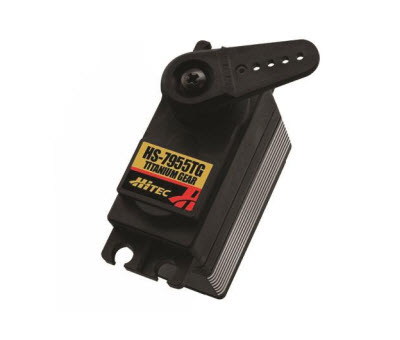 Hitec has owned the servo category since it was added to the Readers’ Choice Awards in 2007, and for a seventh year in a row, the HS-7955TG linkage-puller is your pick. We’re beginning to think you guys like this servo. Is it the 333 oz.-in. of torque? The speedy 0.15 second transit time? The tough titanium gears? Don’t answer—it’s not our place to question your love.

We can only imagine what it’s like for Pro-Line’s Todd Matson to be told, year after year, that he has the “best body.” That must be quite a thrill, even if it is nearly all dudes who are paying him the compliment (and there’s nothing wrong with that). In the 17-year history of these awards, Pro-Line and sister brand Protoform have won the body award 16 times. As short-course racing has taken center stage, the winning Flo-Tek bodies have become your faves, and the Raptor version got this year’s nod. It looks fast, goes fast, wins races, and wins the Readers’ Choice award. 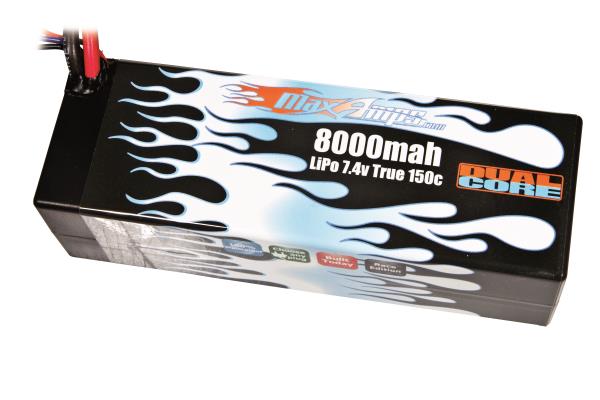 Since 2008, MaxAmps has been the LiPo brand to beat (and has yet to be beaten) in the Readers’ Choice Awards, winning the top spot every year since first taking the trophy in 2008. The popularity of MaxAmps backs is indisputable, and many of you also cited excellent customer service as the reason you reach for MaxAmps. Good for them, and good for you! 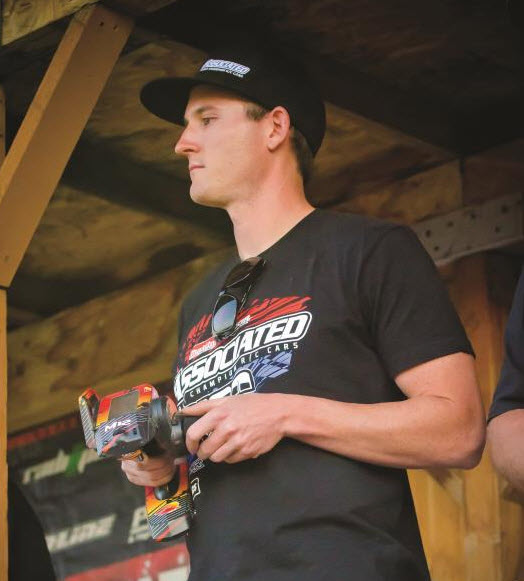 One of the biggest upsets in this year’s Readers’ Choice Awards came in the Driver category, with Ryan Cavalieri knocking off six-time winner and 2012 defending champ Adam Drake. Ryan continued his quest to rewrite the record books by capturing four ROAR National Championships in one week at last year’s Supernationals, bringing his career total up to 16. With a big win this year at the Reedy Race of Champions, the four-time IFMAR World Champion is the odds-on favorite to repeat his sweep of the Electric Off-Road 2WD and 4W titles from 2011.

We went for a two-fer here because the XO-1 and its included TQi transmitter were both top vote-getters, and a nearly equal number of you also voted for “XO-1 and TQi transmitter” as one item. Long story short, your votes told us you see the XO-1 and TQi transmitter with Docking Base as one big innovation. And we agree—after all, we picked the TQi as our Editors’ Choice for Innovation of the Year in 2012. Traxxas’ super-sized, telemetry-equipped 100mph car and convention-shattering iPhone-powered 2.4GHz radio system are true breakthroughs in RC and highly worthy of the landslide they received in the innovation category.

SEE THIS ARTICLE IN THE AUGUST ISSUE OF RC CAR ACTION 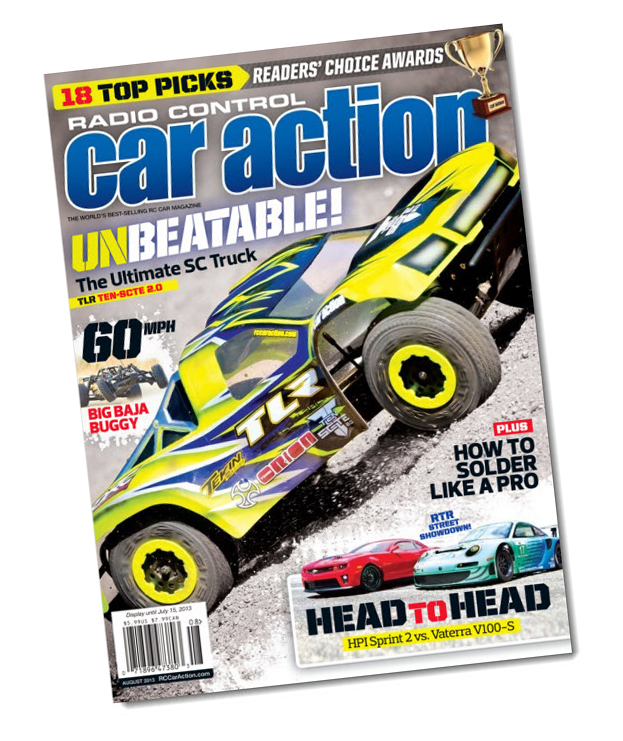