From Team Yokomo:
It is already a past story that it is difficult to handle because it is a performance that can compete in the world race scene. The time has come when a competition touring car as a hobby is needed, where you can enjoy and feel the rigors while improving the performance to the latest specifications.

Driving performance that has been extremely tested by repeated tests in the top races in Europe. While boldly refining the suspension and drivetrain, the development vision has always been “usability,” which allows anyone to compete in the race. The supple steering performance that is brought out by the balance with flexibility while ensuring rigidity, and the latest suspension are built with a simple setting method, increasing the sense of security for the driver to concentrate on control.

The characteristic high-rigidity long suspension arm made of graphite is composed of a hybrid with resin and aluminum parts, reducing chassis roll and improving cornering speed. Durability is also confirmed by repeated tests, and it is possible to attack corners with confidence.

The kit is equipped with an RTC (rear toe control) system as standard. While increasing the turning speed, it is possible to bring out the acceleration at the corner exit, which is an indispensable item for modern racing touring cars.

The front shock tower has undergone a dramatic reshape. By separating the left and right, it gives flexibility around the front and finishes with a mild operation feeling. We are also planning to release parts that increase rigidity assuming running on high-grip road surfaces.

The stabilizer is also installed under the suspension arm to promote lowering the center of gravity. The double joint universal on the front has also been redesigned to improve accuracy and durability.

The upper deck has a new shape according to the flex setting of the chassis. A pavement can be used together on the front side, and the rigidity balance can be adjusted according to the road surface conditions.

The rear side of the upper deck is fixed with a post, but the roll is set to move flexibly while maintaining the pitching rigidity by holding the bearing and finely adjusting the clearance.

The joint between the rear side of the upper deck and the bulkhead is Yokomo’s original system, ATF (Active Top Deck Flex) that supports roller pins with an O-ring sandwiched between them. The twist of the chassis is pulled out to the maximum and By changing the hardness of the O-ring or changing to a spacer, it is a point that you can freely control the turning performance. 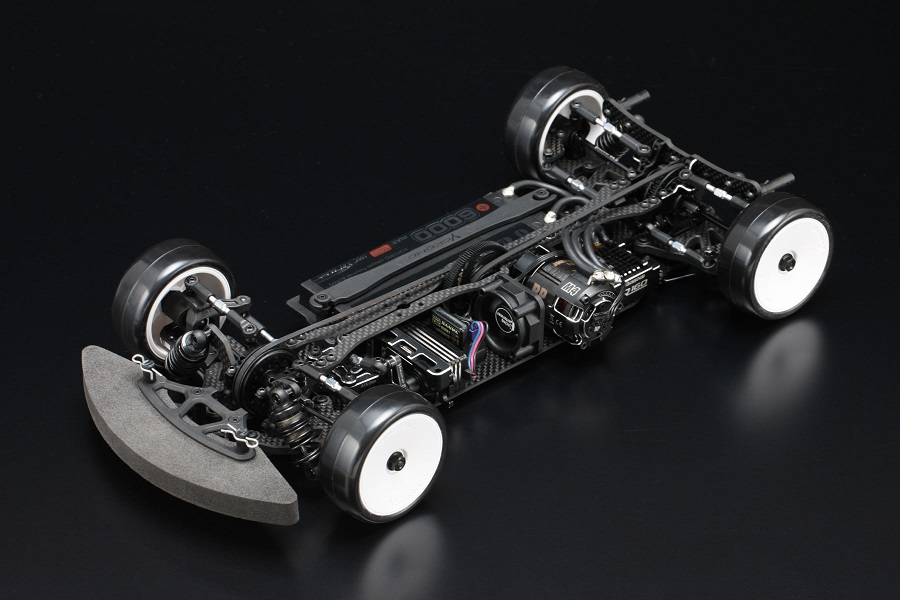