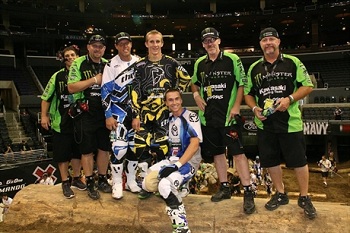 The Traxxas-backed Kawasaki Endurocross team of Destry Abbot (14), Taylor Robert (33), and Justin Soule’ (3) put in an inspiring performance at X Games 17. The Endurocross track featured unique obstacles including a treacherous drop-in ramp, a water-hazard, and a giant hill covered with rocks and logs, which racers dubbed “The Matterhorn.” Justin Soule’ powered around the course with explosive energy and finished on the podium in third place, capturing a bronze medal. Destry Abbott also battled hard throughout the night to finish sixth overall after winning an exciting LCQ. A rough start in his heat race left Taylor Robert near the back of the pack coming around the first turn, he put on an impressive charge to finish second. In the Main Event, Robert finished ninth overall.

“This whole X Games experience was out of this world,” said Soule’. “Although I was shooting for gold, I’m really happy I medaled. It was such a great start to the EnduroCross season. I’m so happy I got on the box and was able to represent my sponsors world-wide, in front of millions. The best moment of the entire night was the last lap of the main event. I was in third, but got hung up and Joaquin Lundgren got around me. In the last couple turns I got back around him for third and the crowd went crazy. The start was hands-down the most difficult part of the course, it was so out of control and sketchy. The drop from the gate was difficult enough, but with 10 guys and their egos pushing for the front, charging down that steep ramp off the gate was scary. My KX™250F ran like a dream. Our team, and my mechanic Steve Smith, have put in a lot of time getting my KX250F dialed-in for this event and it couldn’t have run better. It was such an amazing night.”

“The X Games was so great, I’ve never felt like such a superstar before,” said Destry Abbott. “The promoters really take good care of the athletes, so just being a competitor there is a really big deal. It was awesome to be part of that whole experience. I’ve never had millions of people watching me race, it was off the hook. I think the exposure will make a huge impact for the sport of EnduroCross. Now that people know what it’s all about, and it’s a lot of fun to watch, I think more fans will be filling the stands at future EnduroCross events. The LCQ was the highlight of my night. Ricky (Dietrich) and I were battling almost the entire race. In the last couple laps he got around me in the water, but I got him back in the rocks. It was so cool to hear the roar of the crowd and know that thousands of people were cheering for me. My goal was to make the main, and I knew it was going to be a tough task, but I made it. I’m happy with how I did in the main. I thought I was going to finish fifth, but made a mistake on the last lap which left me in sixth. Overall I had a lot fun and am happy I left the X Games healthy because I have to get on an airplane in a few hours to fly to Finland for the International Six-Days Enduro (ISDE).”

“Being at the X Games was pretty awesome,” said Taylor Robert. “It was so cool being one of the athletes, and chilling in the lounge with other athletes that I looked up to when I was younger. Racing the EnduroCross was such a cool experience. The fan’s cheering actually helped me because I always knew when someone went down. In my first heat race my bike actually got kicked out from underneath me when other racers slid into me off the start ramp. My KX250F got flipped upside down, but didn’t stall, so I picked it right up and started putting some solid laps. I went from ninth to second, caught the leader, and kept trying to get around him. I could hear the crowd cheer every time I tried to make a pass and I was really feeding off the energy. I ended up running out of laps and finished in second. In the main I got a decent start, but just made some mistakes and had a tough time relaxing. That was my first EnduroCross main event and I finished in ninth place, so it didn’t go exactly how I wanted, but I’m happy I made the main. My KX250F really ran great, we’ve spent the last few months really getting the bike exactly how I wanted. The suspension was perfect and the tires hooked up good even on the wet stuff. I can’t wait to do this again next year.”