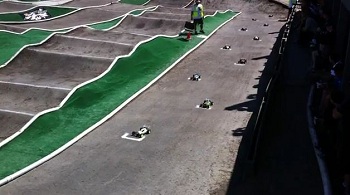 Here is a video of X Factory Chief Engineer Paul Sinclair’s main event race at the recent R.O.A.R. National Championship event in California.  Paul starts and finishes second in this race.  He makes several early- and mid-race driving mistakes; at the end, Paul is easily catching the race leader.

“The car was very easy to drive fast, which is one of the main things we want,” said Paul Sinclair following the race.  “Between qualifying rounds I added a rear sway bar to gain stability off the straight and on the far side.  I was able to pass inside several cars through the right hand corner before the drop off, which felt good.  Crashing over the quad while leading the first lap was a dumb mistake, I should have run away with that race!  With more track time I would have liked to motor up and add low-speed steering through the switch-back section.”

Chazz added, “Several problems were apparent in video of the first X – 7 prototype from Cactus, and you can see here that the Gen 5.1 car solves most of those problems.  Paul is very happy with the platform and will now refine the car for production.  Things like strength of parts, ease of assembly and wiring, and so on. Gen 5.1 is a giant step toward the production vehicle – still a few small things to work on, lots of testing to do, but much progress over the summer.”