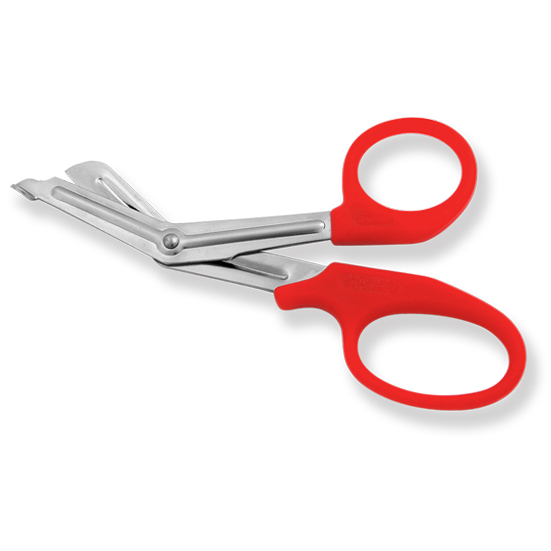 RC cars require a lot of maintenance – well, mine do anyway.  In my own humble opinion: If you don’t break it, you aren’t driving it hard enough.  This of course means I spend a good amount of time at the workbench, and that’s just fine with me.

Not everybody enjoys bench time as much as I do, however, and some people find it downright frustrating.  In many cases this is due to simply not having the right tools for the job, and that’s where my blog comes in.  Periodically I’ll post one of these “workbench essentials” articles with the intent of giving you a quick rundown on a tool or accessory that has made my life easier in the RC world.  My hope is to help you expand your tool collection in an intelligent and useful way, hopefully without breaking the bank.

My tool drawer find this time around is a humble set of utility shears, sometimes referred to as “paramedic scissors”.  They’re cheap, tough, available almost anywhere, and you can get them in whatever your favorite color is. 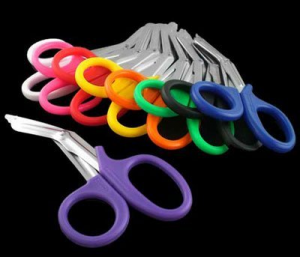 You can even match them to your outfit. How very fashion forward.

I’ve seen these shears sold for as little as a buck, but they’re usually around $4 for a set.  They have a ton of uses and will cut just about anything you can think of that needs cutting, such as servo tape, Lexan, parts trees, fuel tubing, zip ties… the list goes on.  They also work fairly well as wire cutters, although some of the larger gauge wires can put up a bit of a fight.  I’ve used utility shears to cut weeds and small branches that got themselves hopelessly lodged in my monster truck’s suspension, and I’ve even used them to cut small screws down to size for a field repair.  If you’re a scale crawler kind of person, these also work very nicely for narrowing tires – they’ll cut through a tire carcass like it was butter.

The blunt end of utility shears can also be used for various types of light-duty prying, such as popping off ball ends, gently forcing open a jammed radio box cover, or opening a stubborn can of your favorite energy drink.  The strengthening grooves in the blades, when laid flat and concave side up, are a fantastic place to put tiny parts during a repair, such as grub screws, diff balls, or e-clips.  In a pinch, they’ll even work as a screwdriver.

Overall, utility shears are a no-brainer addition for your field kit, and they’re also pretty darned good around the workbench in general.  For the price, there’s simply no other tool out there you’ll get as much use out of.

Pros: They’re cheap, safe to use, have a multitude of uses, and they won’t stab you to death if you walk around with them in your pocket.