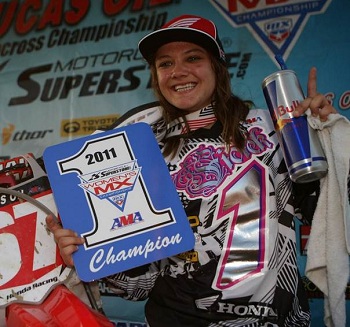 At 21 years old, Ashley has proven herself as a true professional on and off the track and is a pioneer in the motocross industry. Ashley made her pro debut in 2008 at the AMA Pro Motocross series and captured the championship title, becoming the youngest WMA champion in history. She was also the first female rider to receive a full factory sponsorship with the Honda Red Bull Racing team.

Ashley’s achievements are even more impressive considering she cannot hear her own motorcycle or those of her competitors. Profoundly deaf since birth, Ashley is an advocate for the deaf community and uses her motocross notoriety to gain awareness for her sport and for the hearing impaired.

“I am very excited to join the Traxxas family and to be given such an incredible opportunity to represent a company I am very familiar with,” said Ashley. “I love Traxxas R/C vehicles. They absolutely rip and I can’t wait to get my hands on their latest stuff. My little brother Kicker can’t wait either! I look forward to working with Traxxas in the future and know it will be a lot of fun.”

Ashley has captured the attention of mainstream media with features in USA Today, The New York Times, ESPN The Magazine, Vogue, Rolling Stone, Cosmo Girl, ESPN, and Speed TV, plus television appearances on ABC’s Good Morning America and TBS’ Conan O’Brien show. Ashley is also set to guest-star in four episodes of ABC Family’s “Switched at Birth,” playing a motocross racer and love interest for a lead character. Within the motocross industry, Ashley has been featured on the covers of TransWorld Motocross and Racer X magazines.

While enjoying the media spotlight, Ashley’s focus remains on winning races and she will compete as a Traxxas rider for the remainder of the 2012 AMA Women’s Motocross season. You can learn more about Ashley at AshleyFiolek.com, and follow Ashley and all the Traxxas athletes at Traxxas Racing on Twitter and Facebook.