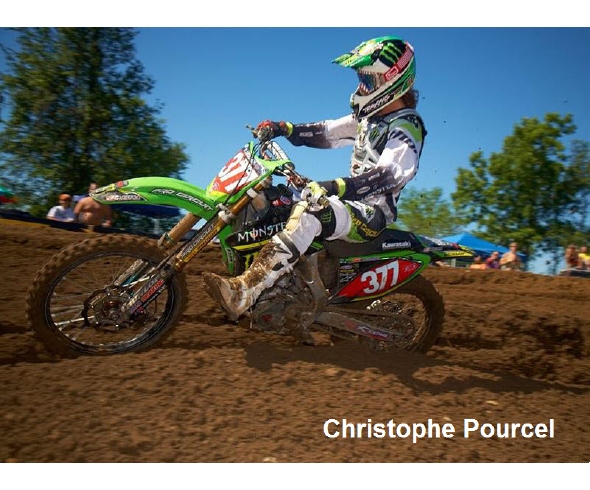 Buchanan MI: It seems at every event the Pro Circuit/Kawasaki/Traxxas team is threatening to sweep the podium, and Red Bud was no exception as Dean Wilson and Christophe Pourcel finished second and third overall. Tyla Rattray was also in position for a podium before a crash sent him back to sixth overall. Jake Weimer rode strong before a crash finishing eighth overall.

There was a new name at the top of the qualifying sheets this weekend, as Tyla Rattray became the first rider to eclipse Pourcel in qualifying this year, posting the fastest lap less than three-tenths of a second quicker than the Frenchman. Pourcel was second, with Wilson sixth and Weimer eighth.

“I thought I was riding well today,” said Rattray. “I had some bad lines early, but I was behind Pourcel and followed him to find some good lines. In the second moto I was making a charge at Dean (Wilson) on the off-camber turn. I didn’t see the bump until the last minute. I tried to wheelie over it, but I couldn’t and I went over the handlebars.”

In the first moto, the start looked like an advertisement for Pro Circuit power as Pourcel, Rattray and Weimer pulled the field through the first turn. Wilson didn’t get the jump out of the gate crossing the line at the end of the first lap in seventh. Pourcel and Rattray began to pull away from the field and the teammates would ride in lock-step throughout the 15-lap moto to finish 1-2. Weimer was right there running fourth until the 12th lap when he lost his rear brake and crashed coming down a downhill dropping back to 11th. At the same time, Wilson was charging through the field, and the young rookie made it up to third by the checkered flag.

“I was up front and riding well and then my rear brake was just gone,” said Weimer. “I’m not sure what happened, it was probably a rock or something, but the brake didn’t fade it just didn’t work. Coming down the hill, I had nowhere to go and I hit someone and went down.”

The start of the second moto was great for Wilson and Rattray as they came out 1-2, but Pourcel and Weimer had a battle on their hands coming out seventh and ninth respectively. Wilson led the first ten laps but an aggressive pass by Trey Canard sent him off track and he fell back to second. Right on his rear fender was his teammate Rattray, who also had a go at him, but a breaking bump sent the Rattray over the bars and dropped him to 11th in the order. Wilson rode on to second place for Moto 2, and second place overall. Christophe Pourcel did not make the Moto 2 podium, but his fifth-place finish combined with his Moto 1 win did give him third overall. Pourcel also maintained his series points lead, with Dean Wilson and Tyla Rattray in second and third in the points chase to cement the Pro Circuit/Kawasaki/Traxxas team’s dominance of the 250 class.

“I tried to pace myself out there,” said Wilson. “I knew it would be a long moto, and the track was rough, so I rode steady and didn’t push too hard. It felt good to lead the second moto early. (Trey) Canard made a pretty aggressive pass to get by me, but it was clean. I went off the track, but I stayed on the throttle and didn’t lose too much ground. It was a good weekend, I finished second and stayed safe.”

AMA Motocross action continues in Millville, MN at Spring Creek Motocross. Tune in to SPEED on July 18 at 4pm Eastern (1pm Pacific) for all the excitement!