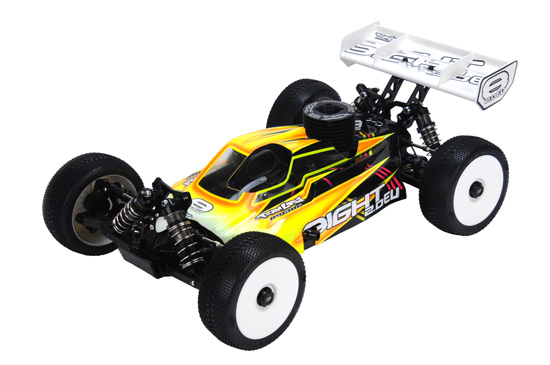 We contacted Losi to see why they produced the 8IGHT 2.0 EU specifically for the European market. Since Adam Drake is involved with everything nitro and racing at Losi he was a good source to find out more about the EU. Here are five quick questions with The Drake.

RCCA: What prompted doing a buggy specifically for the European market?

AD: Obviously our car is very popular here in the U.S. The tracks in Europe are high-speed and we’ve expanded our team in Europe. We’ve been getting feedback from our drivers over there about what they wanted in our car. We just felt there was a need for a buggy specifically for that market and the tracks in Europe. Mike Truhe and myself went over there and raced and while doing so we learned a lot. From what we learned and from the feedback we received from our racers, we felt there was need to put a package together for them.

RCCA: The EU is set-up for high-speed tracks with lots of bite, would it work on any large tracks here in the U.S.?

AD: Yeah I think so. I think that the current car that we have will be better suited for the majority of the tracks here. There may be a few tracks similar to the ones in Europe where the EU might be better. It’s gonna be cool to see if some guys in the U.S. order the car from Europe and will try them out here. I think the EU is better suited for the European tracks and the current car is better for tracks here.

RCCA: Will the EU parts be available in the U.S. for racers to try out?
AD: Only a few selected parts. The front spindles and caster blocks, vented shock caps, and foam compensators will be sold in the U.S. The actual black pivots, chassis, body, and all the other black-anodized parts will only be available in Europe.

RCCA: Do you run any of the EU parts on your cars when the track surface warrants them?

RCCA: Was the EU developed here in the States or did you have your European drivers work on the car and create a wish list for this buggy?