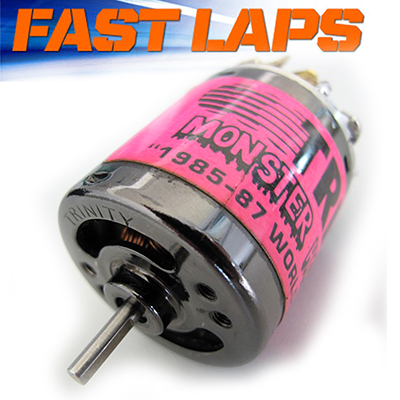 Of all the gigantic advantages in RC technology over the last ten years, there’s no doubt that the motor and speed control units of electric vehicles made the biggest jump in improvement – unfortunately, that transition destroyed the grassroots level of RC racing.

The “stock” class designation for motors has long been used by the RC industry to denote a standard across all manufacturers separate from the anything-goes “modified” class, with the purpose of preserving a slower and less expensive stepping stone between entry-level “Novice” racers and the upper echelon of competition. Stock racing was really the only victim of the otherwise seamless transition of the hobby from NiCD/NiMH to LiPo and brushed to brushless. 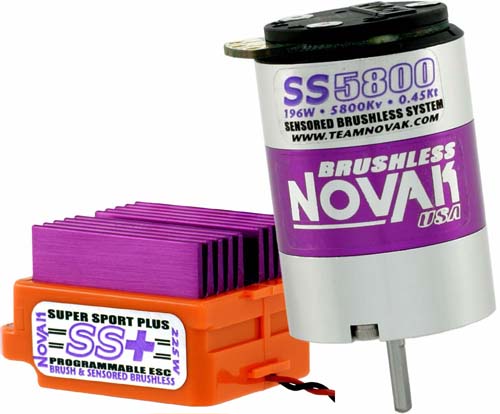 Novak’s Super Sport speed control and SS5800 motor signaled the beginning of the end for brushed motors in RC racing.

Compared to the brushed equivalent of yesteryear, today’s brushless motor is faster, more efficient, and requires less maintenance even though the DC power source force-feeding voltage has not only changed chemistries from nickel- to lithium-based, but increased in both power and run-time. Just as its performance has increased exponentially, so has the technology – that motor communicates its temperature and rotor position to the speed control in order to ensure smooth and trouble-free operation. That speed control now has more adjustment potential including parameters that radically alter, and even improve, the performance of any motor that’s on the receiving end of its power leads.

For experienced and dedicated racers, this is all music to our ears. We love to tinker with every bit of our equipment for extra performance, and any leap forward in technology that makes our cars faster is welcomed, even ironically (see: cab-forward bodies). For incoming hobbyists, it’s part of a growing problem – because it signaled the end of the “stock” class as the starting point to a successful club racing career for three reasons.

Thanks to perhaps one of ROAR’s best rules created decades ago, brushed stock motors had to be available for sale for under a certain price in order to be legal – and as of 2010, that was $46. Though by this time stock motors were allowed to be rebuildable (which itself was a huge improvement over the original sealed motors), every motor used bushings instead of bearings and its endbell was locked at 24 degrees of timing. The only tools available to tune the motor were different combinations of springs and brushes, with pairs of each available for less than $4. The biggest complaint about brushed motors was the variance between motors produced by different manufacturers, and that their commutators needed to be trued very 6-10 runs, requiring either a $200 lathe (that lasted forever) or a ~$5 fee paid to the local hobby shop. 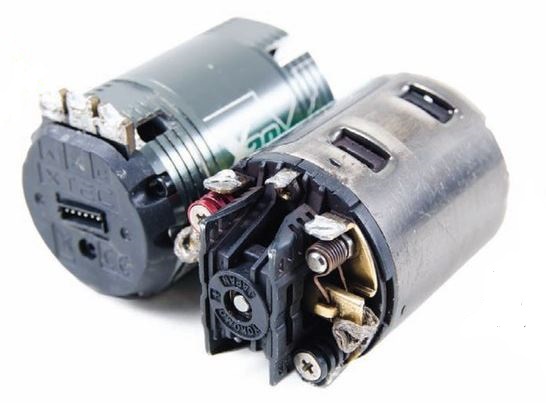 Brushless motors (left) may have many more features, higher efficiency, and better performance than their brushed counterparts (right), but they’re also more expensive. Without any true way to match up similar classes of each, comparing the two technologies is like apples and oranges.

Today’s 17.5 motor, which is the “stock” class, can go for as high as $130 – and you’ll be hard-pressed to find a motor that’ll keep up for less than $70-80. They’re fitted with bearings – which means that optional units are available for as high as $40. Instead of $4 springs and brushes, you can tune your brushless motor with replacement rotors that change how much power the motor creates – which can cost up to $60 each. Yes, you can build a single 17.5-turn brushless motor for the price of a stock brushed motor and lathe.

Back in 2006, the Readers Choice Award winner for the “Speed Control” category was given to a brushed unit for the final time. The flagship 1/10-scale racing unit of its brand sold for $175; tuning features included seven different throttle parameter profiles, and the seventh could be adjusted for drive frequency, minimum drive, brake frequency, minimum brake, current limiter, dead band, and drag brake – and not one bit of it required an additional programming device or laptop. 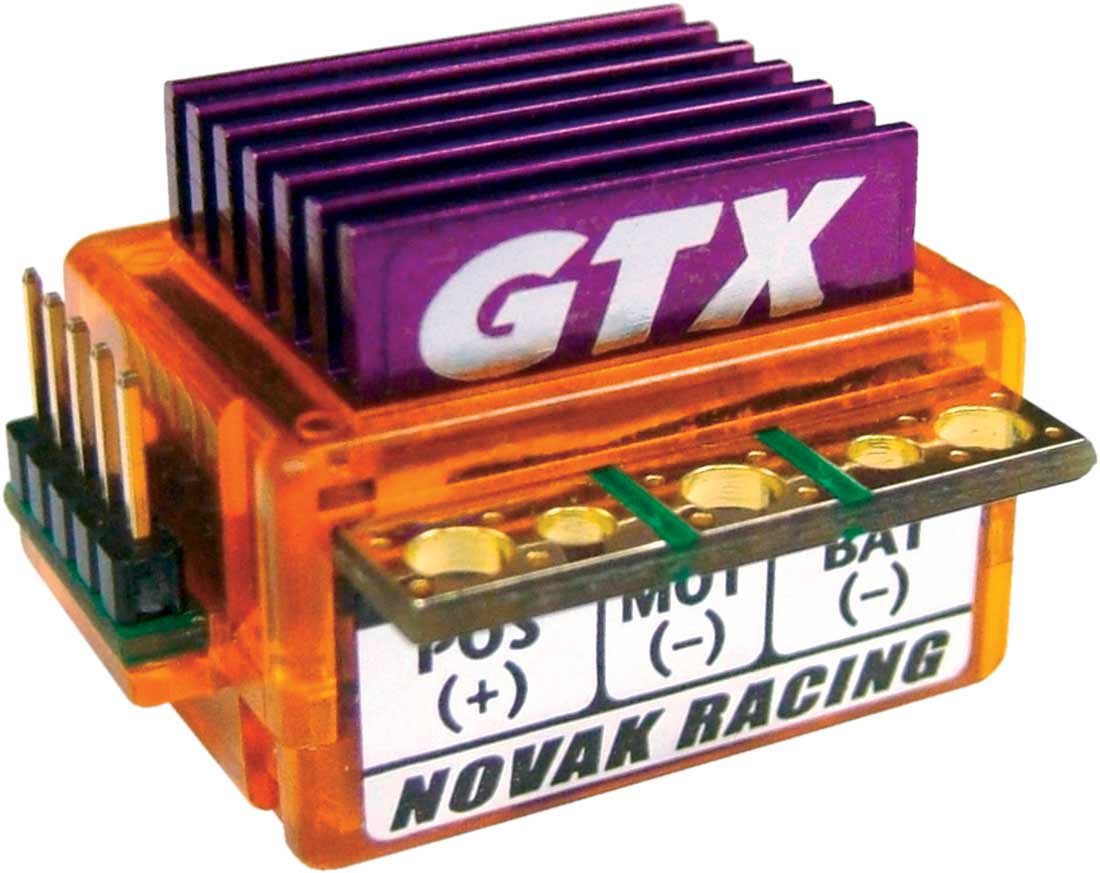 Novak’s GTX was their last flagship brushed speed control, and although it was the leader of its generation its performance and tuning options are both easily overshadowed by today’s brushless units.

Just eight years later, there are over a half dozen manufacturers with 1/10-scale specific racing speed controls for $200 or higher. Each can be programmed via either a standalone digital device or a personal computer using a proprietary connecting cable, ranging from an additional $25-100 – and nearly all units only offer certain tuning possibilities with this additional device. Adjustments include the above that brushed speed controls featured, along with some useful tools like BEC voltage and LiPo cutoff, but also modes that increase the timing of the motor even further than what’s available by twisting the endbell, as well as further modes that ramp up the timing dynamically based on motor RPM – and that last little bit of capability has made a nightmare out of policing potential cheaters at every level from the local club race to the ROAR Nationals. Manufacturers also release additional software upgrades for their speed controls, yet another facet to their equipment that racers must “keep with the times” to avoid being left in the dust.

Just as they did for racing, brushless motors also revolutionized Ready-To-Runs. Back in the brushed days, very few RTRs came with motors that were faster than the widely-recognized “stock” class limitations – and those that did at least had a speed control unit that could accept the industry-mandated stock motor. Many of today’s brushless vehicles are faster than a properly equipped stock class racer, but the speed controller is often incompatible with a  racing-style 17.5 motor, and never includes the assortment of features that even today’s average club racers change and monitor with laptops in their pit areas. Though many tracks do offer a lenient interpretation of the rules when it comes to the equipment allowed in the Novice division, transitioning to the 17.5 class not only requires a significant investment but also a steep learning curve just to extract the proper performance out of the motor and speed control – attention that could instead be diverted to practicing and learning to tune the rest of the vehicle for free.

RTR motor and speed control combos, like Traxxas’ Velineon VXL-3s system, are perfect for their intended use – but they’re not legal on the racetrack.

Not only are RTR’s no longer competitive, but the average speed of a “stock” class racer nowadays far exceeds what the stock class used to be back in the brushed days. Even though tires and cars have improved to handle the increased power, human evolution hasn’t kept up in such a short time frame – and while it’s no easier to be the top driver at your local track, it’s harder now for a new racer to drive a “stock” class vehicle around the track at speed than ever before. Perhaps the worst part, however, is the gap in speed between “stock” and “modified” has shrunk, while instead the gap has widened between a low-level “stock” class system and a high-dollar combo.

WHERE TO GO FROM HERE?

There’s no doubt that the performance and durability of today’s brushless electronics far exceeds the equipment that came before it, but the cost of being competitive at any level certainly didn’t decrease – especially since those “you have to charge at X amps to be fast, even if it’ll ruin the pack” and “I buy X motors at a time and pick the best one!” stigmas from the brushed motor days didn’t go away but only got worse. While it’s hard to argue that the increased performance, extra tuning options, and added durability weren’t all huge improvements for regular racers, who’ve demanded this advancing technology from the manufacturers and voted with their wallets, the average incoming hobbyist has a larger barrier between “playing in the backyard” and “lining up for heat one at the local track” than any time in our hobby’s history. 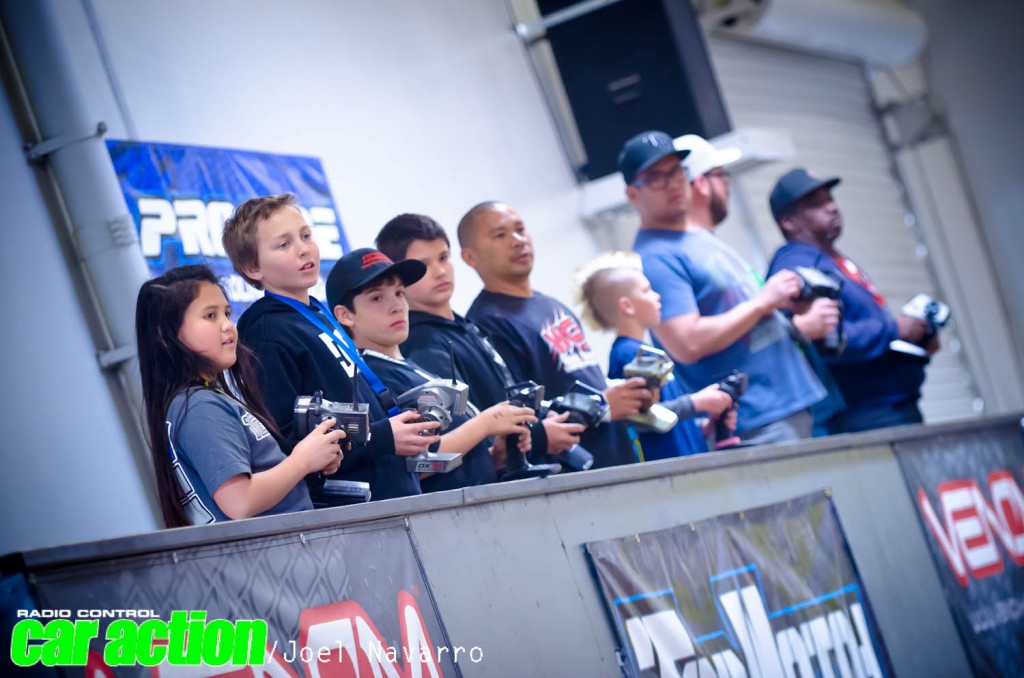 A slower, safer, and less expensive stepping stone is meant to encourage the younger and newer racers to stick with it, rather than simply being thrown to the wolves.

It’s difficult to say what will fix the situation that we’ve got now. “Blinky” mode, a specific function of the speed control in which a blinking LED denotes zero-timing has been activated, was a novel idea…but it didn’t take long for racers to be accused of cheating by manipulating the blinky mode software. Other manufacturers have released various locked motors and non-adjustable speed controls, but spec classes built around items offered only by a specific brand rarely catch on – especially when the classes are only offered at certain tracks, while others forego the increasingly difficult responsibility of ensuring its competitors follow specific rules.

The saddest part of all this is that the real positive changes for racers of all budgets and ability levels – the higher efficiency and lower maintenance of brushless motors, – aren’t the highlights of today’s technology. After all, if all ten cars on the grid are faster than they were five years ago, the competition didn’t really change – just the budget required. Make no mistake; it’s going to be next to impossible to convince both manufacturers and racers alike that we need to take a step backward. ROAR, who did more than anyone to keep the reigns tight on brushed stock motor evolution, helped open the door to allowing the “stock” brushless designation to spin wildly out of control – and for 2014, abolished a long-standing rule that specifically served to keep factory-sponsored racers from becoming career stock-class racers.

Ideally, I’d like to see all existing speed controls outlawed from stock racing – and only allowed in Modified for another 2-3 years – while the manufacturers develop new speed controls that are less expensive because they do away with the additional tuning options. These units would be compatible with stock and modified class motors alike, just as their brushed predecessors were, and the motors will be the major determining factor of the car’s speed and acceleration. “Stock” class motors should have locked timing, a standardized rotor spec, keyed motor cans and stators that won’t accept stators for any other motor designation, and a maximum price of $50.