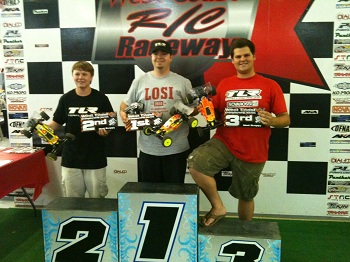 TLR and Losi’s Frank Root, Matt Schreffler, Drew Moller, Trevor Adamo, and Colby Poh raced the 7th Round of the West Coast Championship Series this past weekend at WCRC Raceway. In 2wd Buggy, the TLR crew put on a clinic with 22’s in the top 5 spots on the grid lead by Trevor Adamo’s TQ. The main would be all 22’s again. Trevor would lead the field off from pole, with Drew Moller in the 2, and Frank Root in the 3. Frank made a move to the 2 spot, then got by Trevor for the lead when Trevor had a bobble in the woops section. A daring attempt by Trevor to quickly regain the lead would not work out and drop him from 2nd to 4th where he would finish. Up front, Frank would put in clean laps and take the win ahead of Drew Moller and a hard charging Matt Schreffler giving TLR a clean sweep of the podium! Pro2 (Modified SC) was all Frank Root! Frank’s Losi XXX-SCT with the TLR Tuned Kit was on point in qualifying taking an easy TQ. The single 5-minute main started with Frank pulling out to an early lead, and he would nearly lap the field by the end of the race taking a dominant win and his second of the day! 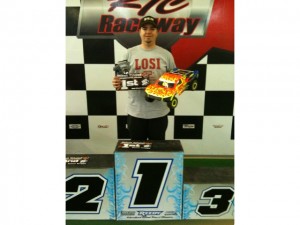