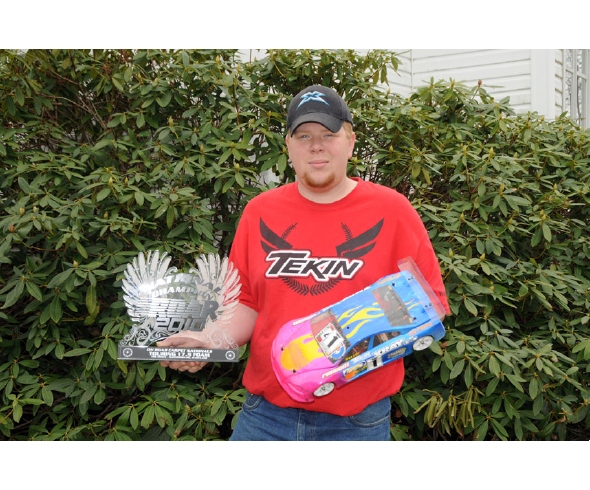 The ROAR 2010 Indoor Carpet Nationals were held March 25 to 28 in Gaithersburg, Maryland. The Track hosted this race which was put on by Mimi Wong. In the usual Mimi style, lunch was supplied for the racers Friday, Saturday, and Sunday; donuts on Friday and Sunday mornings. She made the ROAR officials feel welcomed.

The course was a non-permanent indoor carpet track. The track was green on Thursday and reached a medium-grip by Saturday. The first three rounds of qualifying took place on Friday, the last three on Saturday, with the Mains being raced on Sunday. Chris Goetz performed the task of race announcer for the event. He did a great job. There were 7 classes run that weekend:

Most of the racers arrived on Thursday. The event attracted not only local racers, but a small contingent from Ohio. Josh Cyrul made the trip from Michigan, and Keven Hebert arrived from Canada to make it an “international” event. Two highlights of the weekend: Chris Goetz driving Josh Cyrul’s car and Paul Rush’s “One-Armed Bandit” win in Trans AM.

It was a great event and fun was had by all.
– Wes Lion