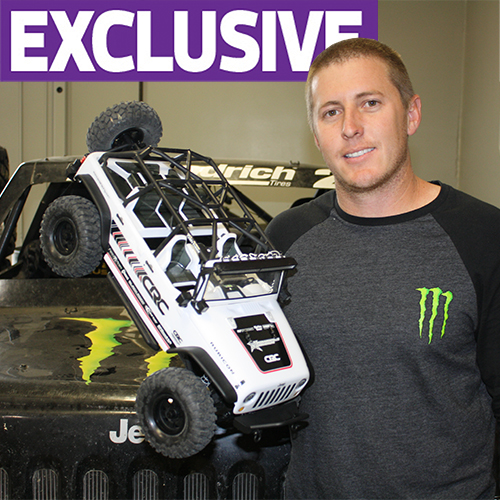 Casey Currie is one of the fastest and most popular racers on the LOORS and TORC short-course circuits, as well as a Baja 1000 vet and King of the Hammers competitor. He’s in the RC news with Axial’s latest SCX10 Jeep, the Wrangler Unlimited CR, which gets the Casey Currie seal of approval and is decked out in CRC colors–that stands for “Cruise-Race-Crawl,” and is Casey’s new brand for Jeep gear. We sat down with Casey at his SoCal HQ to talk about the off-road life, racing, and RC. 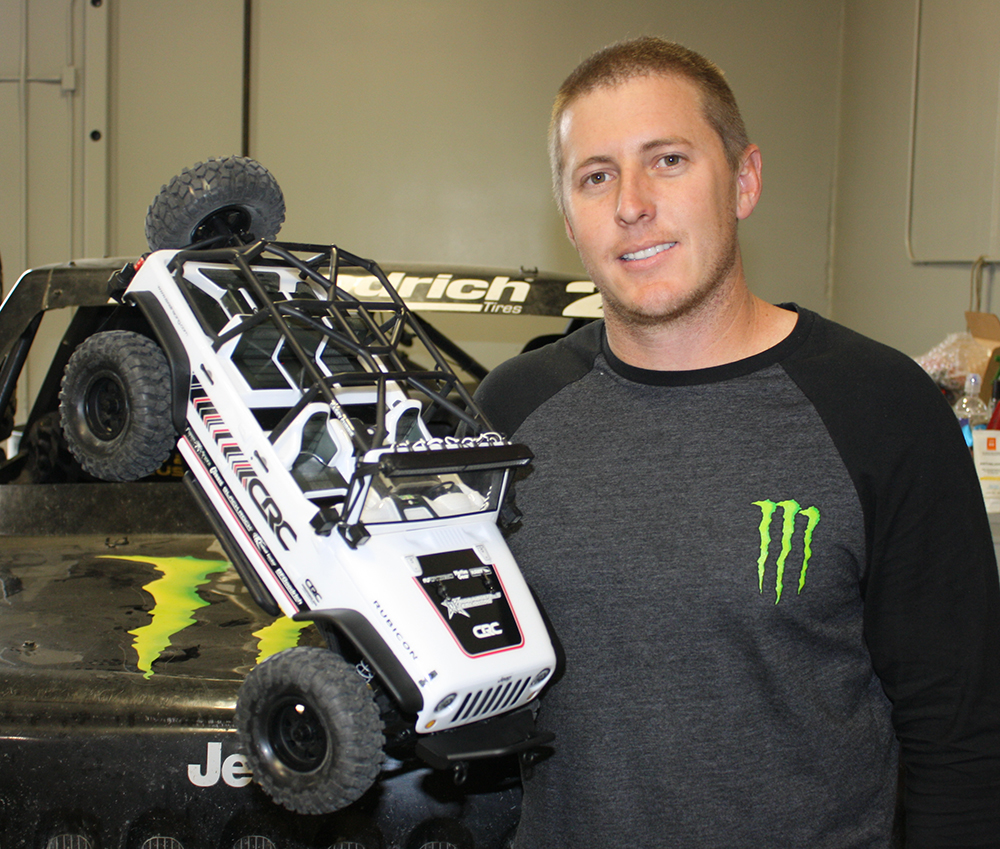 Casey shows off his personal SCX10 at his SoCal race headquarters

Radio Control Car Action: How would you classify yourself — Casey Currie is …

How did you come to off-road racing?

I grew up in a motorsport family. My dad is one of the owners of Currie Enterprises, which was started by my grandfather, who raced in the desert and has always been an enthusiast. And then my dad grew up racing motorcycles and racing desert. I grew up watching my dad racing and then I rode motorcycles until I was 21 and I turned pro racing motorcycles. I won a title at that and then I got the opportunity to race trucks, so I made the jump, I went and raced CORR and did some off-road racing stuff and it basically took off from there into a lifestyle.

When you first go into racing four-wheel vehicles instead of motorcycles, was there any expectation that ‘Of course, Casey’s going to race trucks’?

I feel like there wasn’t any expectation because my dad and my family were always enthusiasts in off-road racing, they always did it in a class, I wouldn’t say it was a class that would appeal to fans, it was more of a class that they were there because it was super fun and it’s a family sport. So, when I wanted to turn pro and race short course trucks on TV, I would say our Currie Enterprise name is a very big name, but as far as people coming out of the name being professional racers, no one knew about me. My dad wasn’t a Rob McCachrane or a Robby Gordon, there was nothing on my shoulders that was heavy. It was my passion and I wanted to go racing.

How did you get involved with Jeep as an off-road enthusiast?

Growing up, Jeeping is what my family did. When I was young, from 6 months on, I grew up Jeeping so being around Jeeps is something we’ve always done. Currie Enteprises makes a lot of parts of Jeeps on the aftermarket side, so we are very heavily involved with Jeeps.

What types of racing are you competing in right now?

Short course off-road racing, Lucas Oil Off-Road and TORC race, those are my two primary focuses. The King of Hammers is a one-time event for me, it’s the one event that if you’re not there you’ve missed out all year and if you are there that’s the one you’re going to get recognized at. I also do the Baja 1000 every year. I’d love to do more desert racing, but I just don’t have the time. 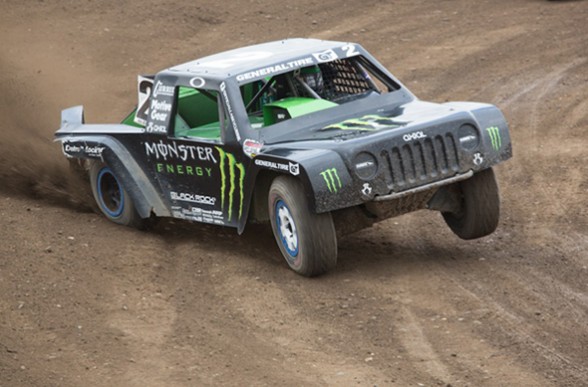 What’s more physically challenging for you —the King of the Hammers or a weekend of short course racing?

I’d say a weekend at the races is more stressful, there’s a lot of pressure just because there’s so many sponsors and people looking at me to do well. As for The Hammers, the racing part is tough because I’m in the car for fourteen hours because I’m the only person to be in the complete King of the Hammers series in all three classes. Some people were tired after qualifying, I qualified three times in one day. And then while everyone was resting for the race, I raced the UTVs and then when everyone was resting I helped my uncle race the Everyman’s Challenge. Then race day came along and I did that race by myself. It’s demanding on your body, but it’s very fun. For me to do The Hammers it’s strictly for fun and it’s entertaining.

How did you come to radio control cars?

Radio control cars are a must for down time. We go to the desert a lot to test and you’re always sitting there, you’re at the desert two or threee days in a row but you’re only driving for 20 minutes and working on the car for 2 hours so it leads to a lot of down time. Obviously, having something that relates to your race truck, having a Jeep, works out perfect for something to do on downtime. And with my Axial trucks, driving RC is like driving a real Jeep. The technology is the same, you drive it the same way. It’s real off-roading. Everything applies.

When you first became involved with radio control cars how eye-opening was it for you to see how similar they are to the full-size in terms of how they operate and technology and what they can do?

When we first saw the Axial Jeep, it was unbelievable the similarities as far as the straight axles and the suspension and just the overall look and feel of the RC car. With Axial and this Jeep, you can put your own style to it, changing wheels, tires, front rims and suspension.  You change weight, you can do so much to suit your driving style. It’s not about speed, it’s all about doing what you want to do. Drive it on the rocks, the sand, the snow, you can make it fit your style. 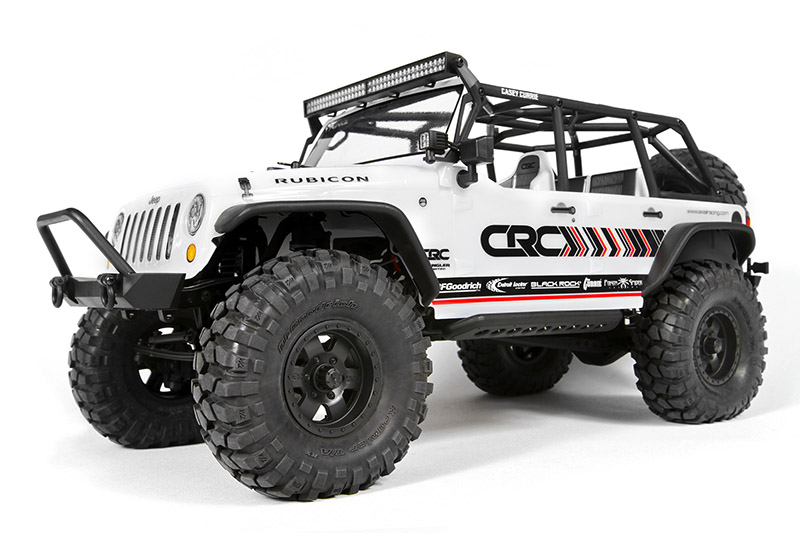 The Axial Jeep Wrangler Unlimited C/R Edition has your CRC logos on the doors. What is  CRC is all about?

CRC is Cruise, Race, Crawl. Basically, it’s hard parts — we’ll have our front/rear bumper, suspension kit, exhaust and wheels. The concept behind CRC is it’s a fitment that if you buy one piece or all pieces, they all bolt on together and they’re made to fit. I’ve learned that in the Jeep market there are a lot of brands that clarify ‘If you run our bumper, then you can’t run this suspension’ and ‘If you run our suspension, you can’t run these wheels.’ So I’m trying to do with my kit is if you buy one piece or all pieces they’ll all fit on the Jeep with 37-in. tires and it’s a bolt together deal, so whether you’re a soccer mom or a hardcore enthusiast, my products will fit your needs.

For the kid who doesn’t have his full-size Jeep yet, will he be able to get some CRC hats and T-shirts?

The CRC swag will be in full effect so apparel will be everywhere. The brand is all about the lifestyle. I’m selling the hard parts so any enthusiast who is a Jeeper can live the lifestyle we do.

Every Jeeper has a story. They’re not buying the parts to put them on the Jeep, they’re buying the parts to tell you why they’re buying the parts. They want to explain to you, ‘We’re buying it because I went Jeeping and my tire is rubbing,’ they want to tell you the story. An off-road guy will buy it just because so-and-so told him to buy it. A Jeeper buys it because he wants to explain to the guy selling the parts why he’s buying it. It’s the same thing with this — everyone who is modifying an RC car, a Jeep RC car, they’re doing it because ‘Oh, when I was out in my backyard, I noticed that my tires weren’t soft enough, so I went out and did some research and I noticed that they make a bigger tire that’s softer’ and that’s what my brand is all about.

I understand that RC fans that come to CRC headquarters might see something for them soon?

Yeah, we’re in the process of building a full-blown RC car, a Jeep rock crawling course. I want to build the ultimate track that fits everybody’s car. Whatever it takes, however long it takes, I’m going to build it.

We look forward to seeing that and sharing it with the readers of RC Car Action! Thanks for the time, Casey.