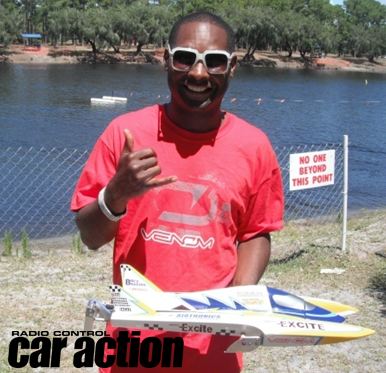 Think the ROAR 1/8-scale Fuel Off-road Nationals in California are the only RC National titles up for grabs this weekend?  If so then you need get out in the water more!

On the opposite side of the map from Thunder Alley RC Raceway is the 2011 NAMBA FE (Fast Electric) Nationals hosted by Wave Blasters in Fort Pierce, Florida.  This year’s event runs from June 1st through the 5th and there are 26 National titles (yes, that is not a typo) up for grabs.  The classes are:

Before a race begins a countdown is started and there is a mill lap for the drivers to fight for a lane that they want to begin in when they cross the starting line. The drivers are supposed to stay in their lanes until turn one, but when there is a National title on the line things can get a little hectic when the countdown reaches zero.

And speaking of hectic, an event in Florida wouldn’t be complete without an alligator on the scene.  The event was delayed for a few minutes as a local alligator handler was called in to remove a young alligator that decided to get a front row seat of all the boat action.  Or maybe he was looking for some “fast” food?  🙂

At this year’s event Novak/Venom/Airtronics/Boca Bearings pilot Bill Oxidean is competing in 12 different classes.  Bill came out on top in the Crackerbox class making him a 7 time National champion.  Tomorrow is last day of the event and look for more updates here on RCCarAction.com. In the meantime check out some of the videos and images below.