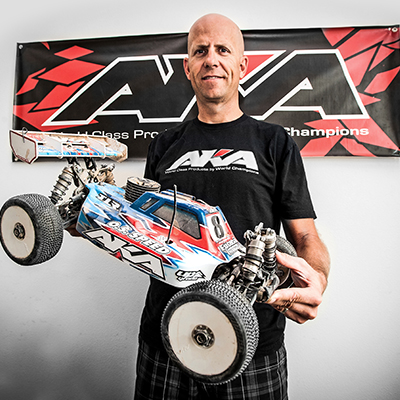 Mark Pavidis is an icon in RC racing. He’s been around since the beginning and still gives the young guns a run for their money. His list of wins is impressive including 1995 IFMAR 1/10 4wd Off Road World Champion, 2006 IFMAR 1/8 Buggy World Champion and IFMAR 1/10 Gas Touring Car World Champion. That’s quite a list just at the IFMAR level and includes a variety of different classes that also reach in to the National Championship area. Needless to say, you don’t get very far at that level without knowing how to set up a car, and with nitro, set it ups need to be fast and durable. For this edition of Under the Hood, we examine Mark’s  TLR 8IGHT 3.0 nitro buggy fresh from the Silver State Nitro Challenge in Nevada. No cleaning here, it went straight from pit bag to SD card still wearings its Vegas dirt. 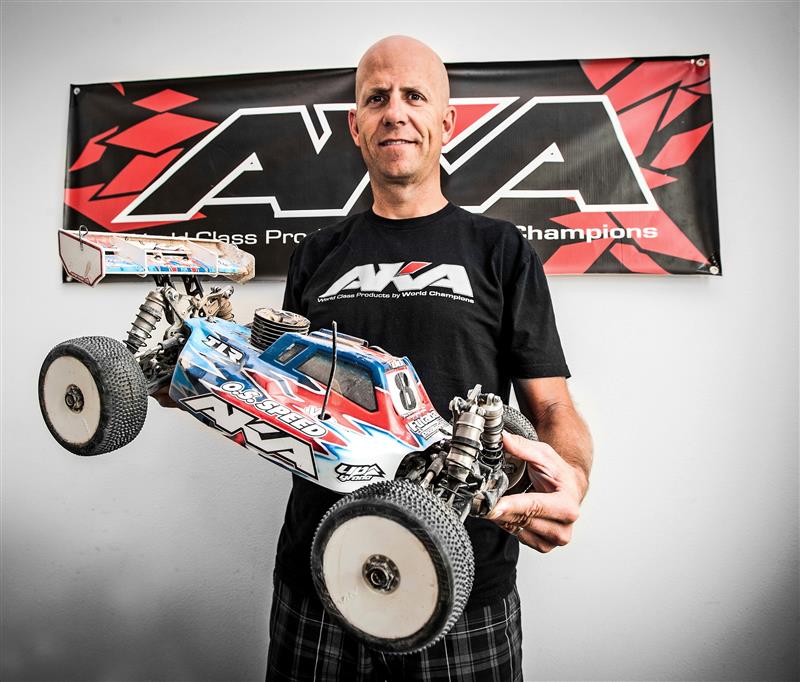 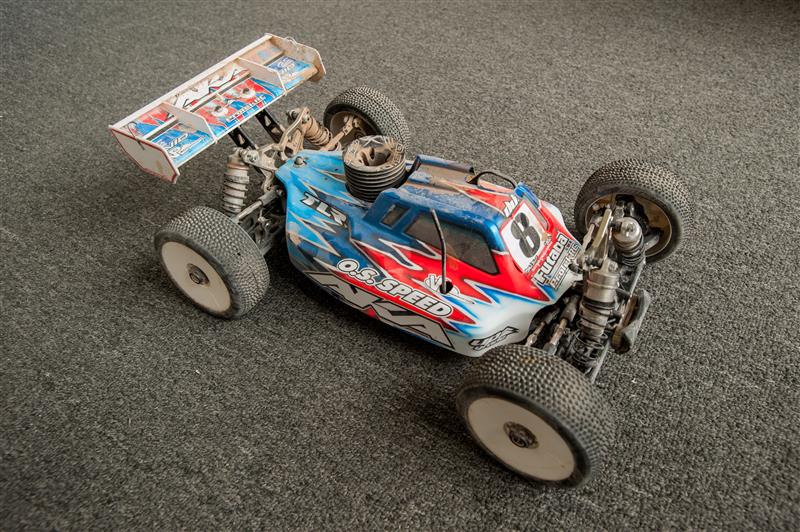 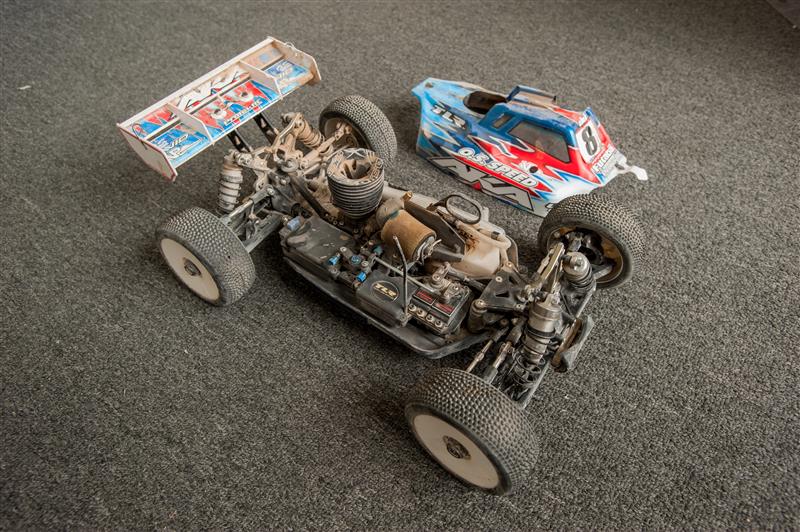 Mark chooses to run TLR’s latest cab-forward body for aggressive handling traits and modern styling. For Silver State, AKA Impact tires were used in Medium compound. Also, Red AKA molded inserts are used and mounted to AKA dish wheels. 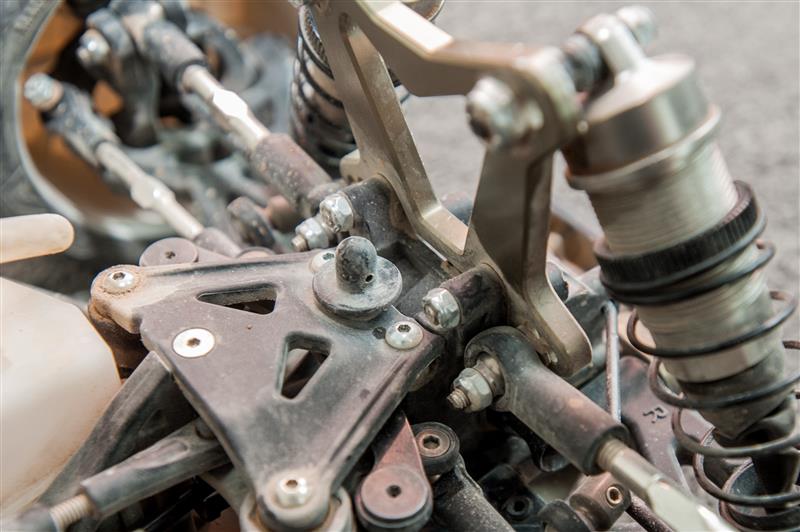 Note the nutted screws that secure the shock tower. Mark drills through the front bulkhead and installs longer screws and nuts to make sure long mains don’t vibrate the parts loose. It’s the little details that can help prevent tiny issues from becoming big. 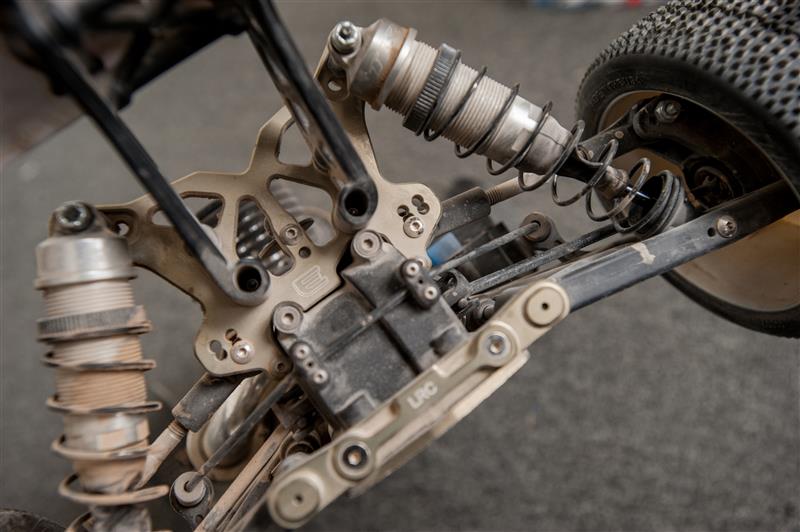 Mark prefers to use the milled aluminum rear shock tower from the 8IGHT-E. This gives him the option to run his camber link lower and closely mimics the setting he prefers from the older 8ight version. It’s not exactly the same position, but pretty close. 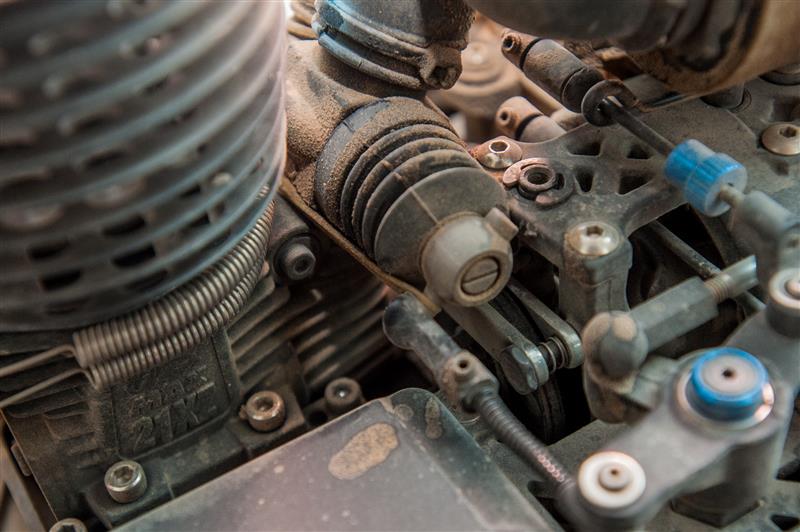 Like many other pros, Mark uses a rubber band as a throttle return spring. Admittedly, this doesn’t really work all that great, but keeps the buggy within the rules that require a spring be fitted to the carb slide so the throttle will close if the servo fails or is disconnected. 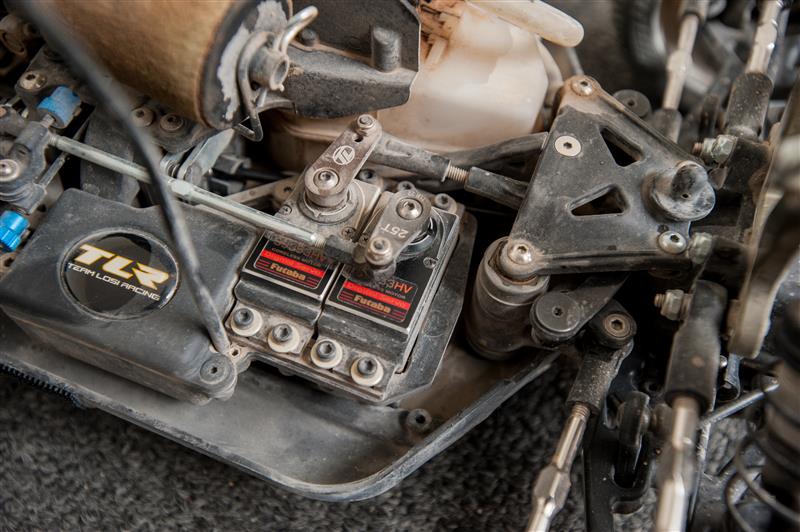 For throttle and steering duties, Mark equips his buggy with Futaba S9353HV servos. They are fast and can take some pretty good abuse. Also, he swaps out the stock plastic servo arms for aluminum ones that also help with durability and precision. A ProTek LiPo receiver pack designed just for the 8IGHT powers the electronics. 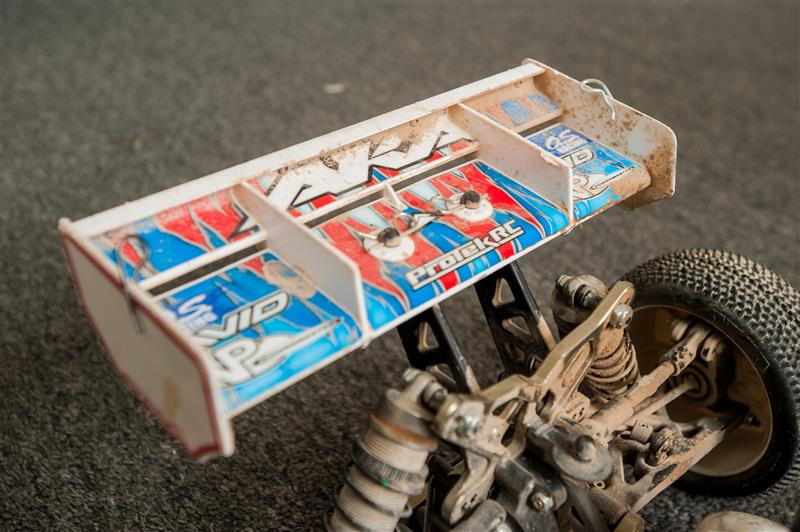 The buggy is outfitted with TLR’s standard wing and has an adjustable wicker. Mark chose to run a bigger wicker (also known as a Gurney flap) at Silver State to help settle the buggy down in the rough areas. 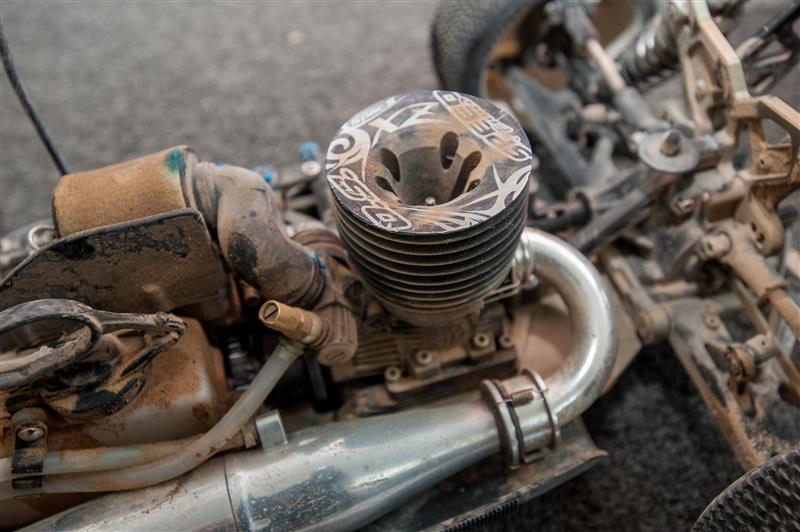 Mark likes the power and efficiency of the O.S. Speed 21 Spec II. The engine is outfitted with a D4 plug and TLR’s 4-shoe cutch. Mark sets the clutch up with two aluminum and two carbon shoes along with black and green springs. 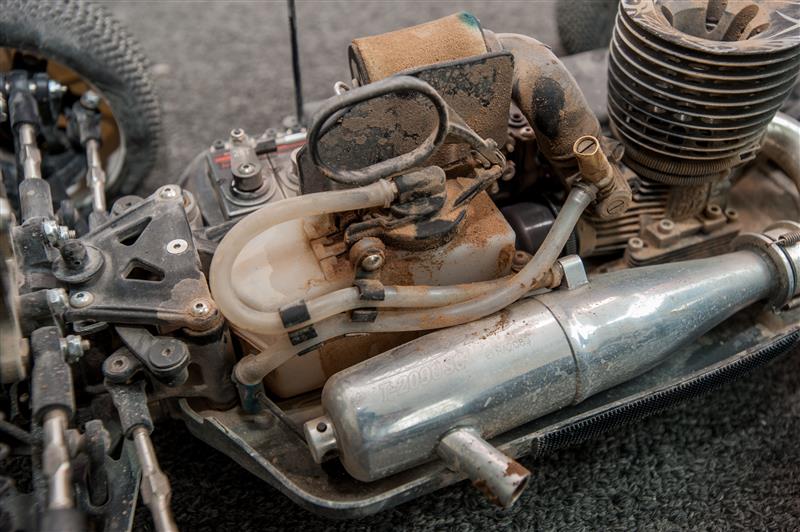 Mark prefers to keep his fuel lines relatively short and adjusts fuel volume by removing or adding inserts built into the tank rather than altering the fuel lines. The pipe is an OS 2090. 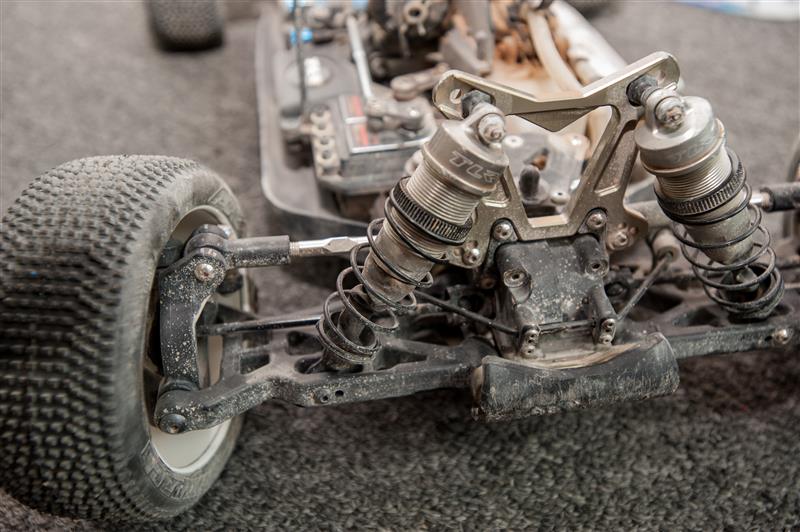 Mark used TLR’s green springs on all four corners. The standard spring setup is green up front with silver at the rear, but green is one step stiffer. Inside he uses Losi 40W with 1.3mm x 8-hole for the front and Losi 30W with 4×1.3mm and 4×1.2mm (8-hole) pistons in the rear. 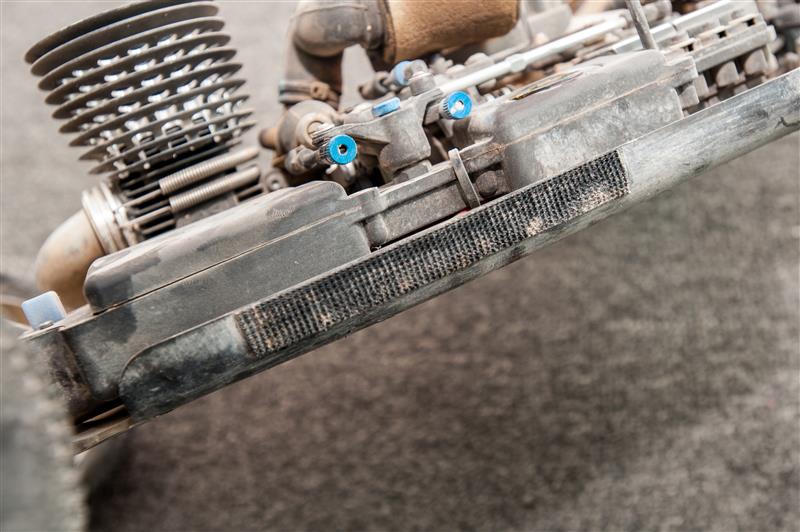 Silver State is loose and dusty and that dirt can find its way in to every tiny spot. To help seal the chassis and prevent “parachuting” when flying through the air, Velcro is used to hold the body tightly against the chassis’ sides. 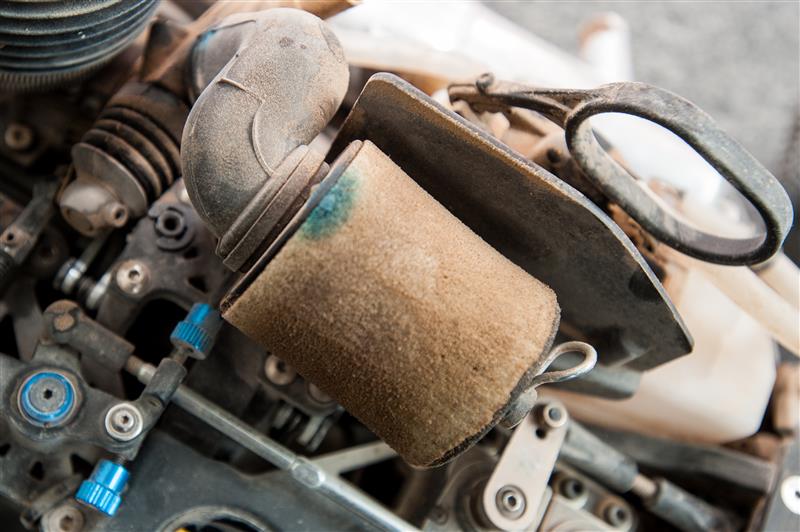 The air filter has a big job to do ay Silver State, so Mark applies grease at the ends to help the foam seal better against the retainer.

There you have it: Mark’s TLR 8IGHT 3.0. Special thanks to Mark for sharing his machine with us. Is there a certain pro car you’d like to see featured here? Let us know in the comments!