I am a big fan of trophy trucks. They’re awesome vehicles that are made from nothing, they have lots of suspension travel and they’re packed full of horsepower. Through the years I’ve messed around with making one of my own, then we started to see some trucks that had the feel of trophy trucks so I started leaning towards building one of those.

Then Traxxas stepped up and gave us the Unlimited Desert Racer (UDR) which is pretty much a copy of a full-size truck; so that became the base for my project build. Traxxas did a great job with the performance of this truck so I decided to focus mainly on the overall look of it and tried to make it as scale as possible by detailing some parts, installing some optional parts and by adding a few custom made parts to make this look like a truck that could easily tackle the Baja 1000. 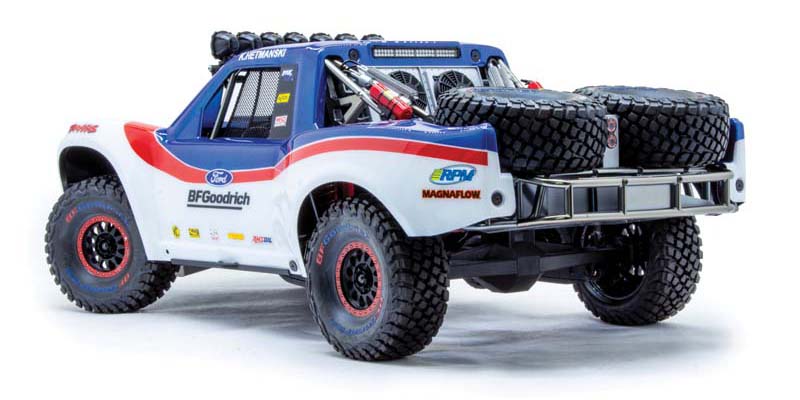 The stock cage that comes on the UDR looks great but the gray color of the plastic doesn’t. I wanted a more realistic look so my plan was to take it all apart and give it a coat of paint to make it look more like steel. Then Traxxas introduced an optional black chrome cage pieces that are as close to the look of a real cage as you’re going to get so I went with it.

Painting the pieces of the cage would have taken a very long time and the result wouldn’t be as nice. Before assembling the new cage I took the time to paint some sections to add some detail. A few panels received some semi-gloss black to match what’s done on some full-size trucks and I painted the fuel cell with aluminum paint to make it look more realistic. I even detailed the filler assembly that bolts to it by spraying that with aluminum paint and some clear red to make some parts look like they’re anodized. 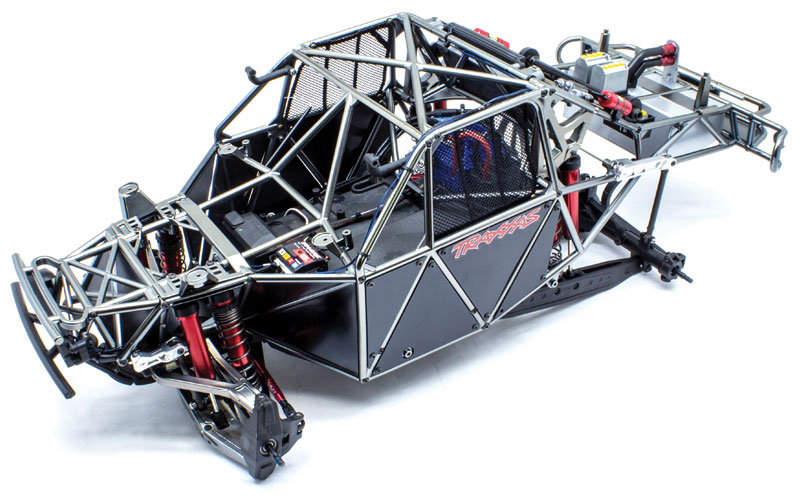 The UDR comes with a spool installed in the rear axle and that limits steering slightly. While I had the truck broken down, I took the time to pull the rear axle apart and installed Traxxas’ option gear diff. It comes assembled and is fully sealed so you can tune it with diff fluids if you choose to do so. Traxxas helps out by packing it assembled so all you have to do is fill it and drop it in. I enhanced things further by removing the stock servo and replacing it with Traxxas’ 2255 400 oz. in. servo. It has 275 oz. in. more torque than stock and it has a slightly faster speed.

The rear axle in this truck is pretty heavy and it hangs down in the rough stuff at all times. The weight of the axle (now even heavier with a full diff installed) and the hits of obstacles while the truck is running is hard on the lower links so I went to RPM for a little extra beef in this location. Their lower links have more material around the pivot balls, are thicker in the shock mount area, are squared off to make them less prone to bending and they accept RPM’s optional (which was added) skid plates. On the front side is a RPM skid plate. It’s engineered to take a hit better than stock, roll over obstacles better than stock and its multi piece design makes maintenance a little easier.

Traxxas did a great job of including some scale accessories like a radiator, fire extinguishers, batteries and more to enhance the scale look of the truck. They’re all simply molded in a single color so I removed all the pieces and started painting to add some detail. Parts like the radiator, fire extinguishers, oil bottle containers and jack received some coats of spray paint then a little detail work with a brush. The radiator received a little extra attention with some screen on the interior side to make it look even more scale. 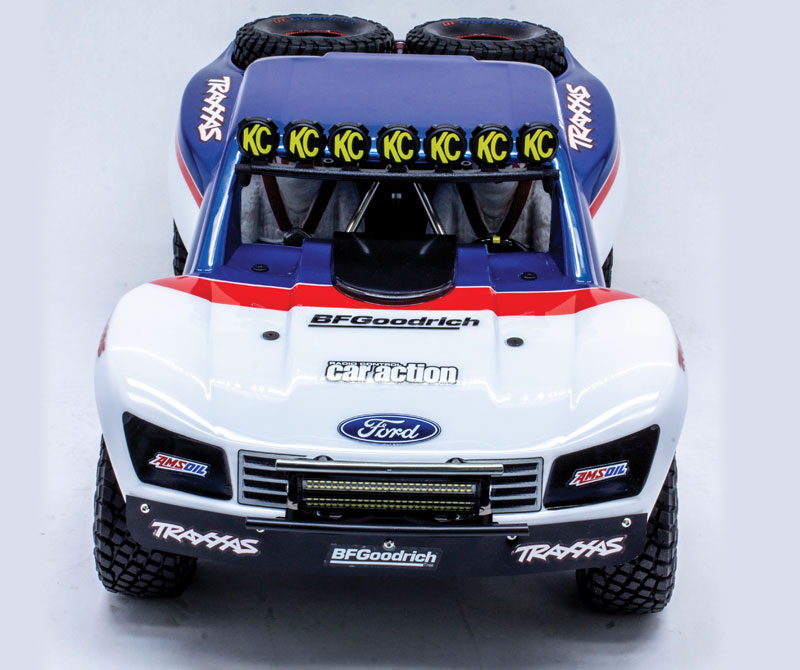 There’s nothing better than that classic BFGoodrich/Ford paint job.

I know that rectangle LED light bars are the rage these days but I’m still a fan of the round lights that run along the roofline of trophy trucks so I went that direction on my build. The UDR is a pretty heavy truck and pretty much anything I put on the roof will be in the danger zone if this truck flips so I went with a 3D printed light bar that is only there to look the part. If I run the truck, it will be removed to keep it in one piece.
I sat down at my computer and after a while behind the keyboard I came up with light pods and covers that look just like the ones used on some full-size trucks. They’re mounted to 3D printed bars that use the stock mounting location that’s normally used for Traxxas’ LED light bar. I could have designed them to accept LEDs but to me the lights look best with covers in place so I skipped the LEDs. That also makes them easier to remove when I drive the truck or remove the body. 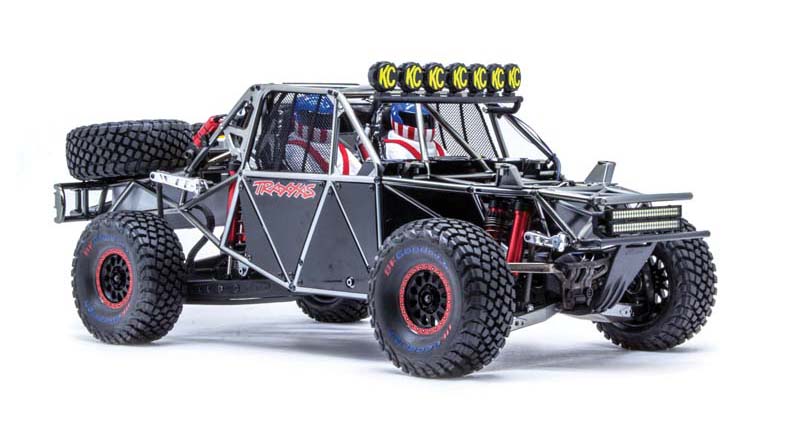 Like scale parts on the outside of the truck, the included interior is a single color piece and some stickers add to the look and I wanted to take it to the next level. I masked off the driver figures and gave them a few coats of white paint with some red on the gloves, then I made them look dirty by giving them a few light coats of a brown wash. Some red shoe lace was used to make seat belts and a 3D printed shifter, switch panel and rear cage section that has a Pro-Line fire extinguisher mounted to it.

I forgot to add the ball to the end of the shifter and didn’t have time to get a new part made so I solved the problem by gluing a piece of pearl couscous to the end of the lever and painted it black. The helmets are stock but I went to town and gave them some custom paint and a lot of clear to make them stand out. Some of Traxxas’ window nets add to the look. 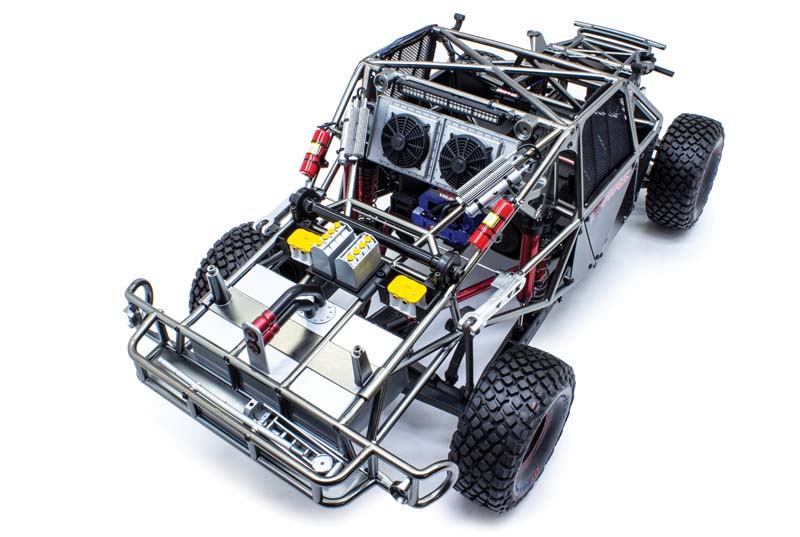 The cage on my UDR is a black chrome unit that you can get through Traxxas. They did a great job of making it look like a metal cage.

LET THERE BE A LOT OF LIGHT

Traxxas’ LED light set is a great way to add scale detail and they light up the way for any night runs. Since I have my scale light bar along the roof, I skipped the roof light but I did install the smaller bumper lights. I also went with the tail light and it’s cool because it lights up and has a built-in functional brake light. Traxxas designed the system to give you different light functions and you can change from a low light to a bright light with a simple hit of a button on the unit that they LEDs plug into.

The aluminum color of the shocks look the part and I planned on keeping them on my build. Then Traxxas came out with some different colored anodized aluminum parts for the truck and I couldn’t resist the urge to give the chassis a little extra color. Now my truck has red anodized shocks, upper links and steering links.

I started with the Fox version of the UDR and that came with rims that had orange faux bead lock rings and I wasn’t a fan of their design. Lucky the rims used on the Rigid version have red rings that match the look of my truck better and have the design I was going for so on they went. Before bolting them up I detailed them by painting the bead lock nuts silver and I painted the lettering on the sidewalls.

The stock wheel hexes have a great scale look thanks to the faux disk brake that’s molded into them. I was concerned about the durability of plastic hexes on a truck this heavy and powerful so I removed the stock hexes and went with Traxxas’s metal hexes to eliminate that worry.

With all that work done, I couldn’t go with a stock body so I grabbed a clear version from Traxxas and went with an old school red, white and blue BFGoodrich/Ford paint job. It looks great and matches the color used on the anodized parts and helmets. Some custom decals along with ones from the zillions of sticker sheets that I have finished off the look.
I went one step further by making a skirt for under the grill and headlights that look more like the ones found on full-size trucks. I cut it out of a piece of .020 Evergreen styrene sheet, painted it semi-gloss black and finished it off with some stickers before screwing it to the body. 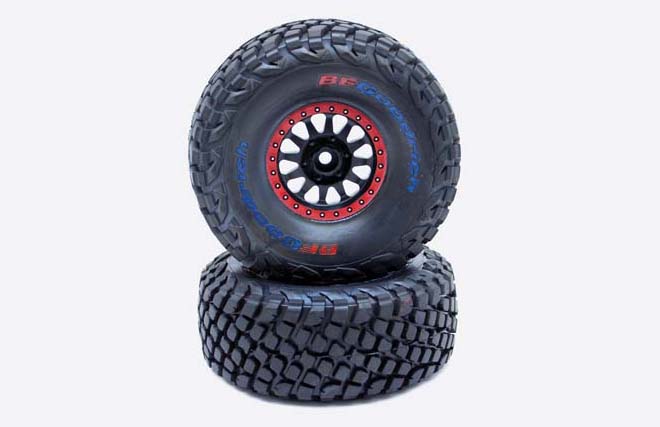 The Rigid tire combo has red bead lock rings that match the rest of the truck very well. I enhanced their look by painting the bead lock nuts and letters on the sidewalls. 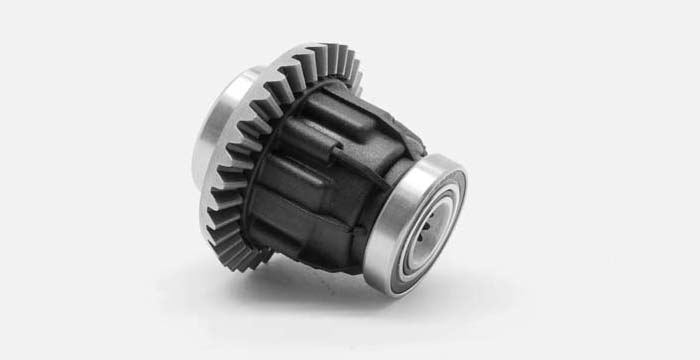 The rear diff comes assembled and ready for fluid before you drop it into the axle housing. 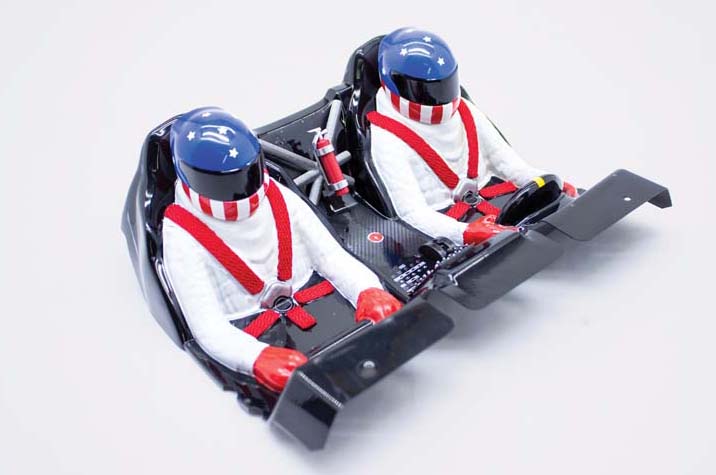 A lot of work went into the interior to make it more realistic. 3D printing, painting,
weathering and more make this one stand out. 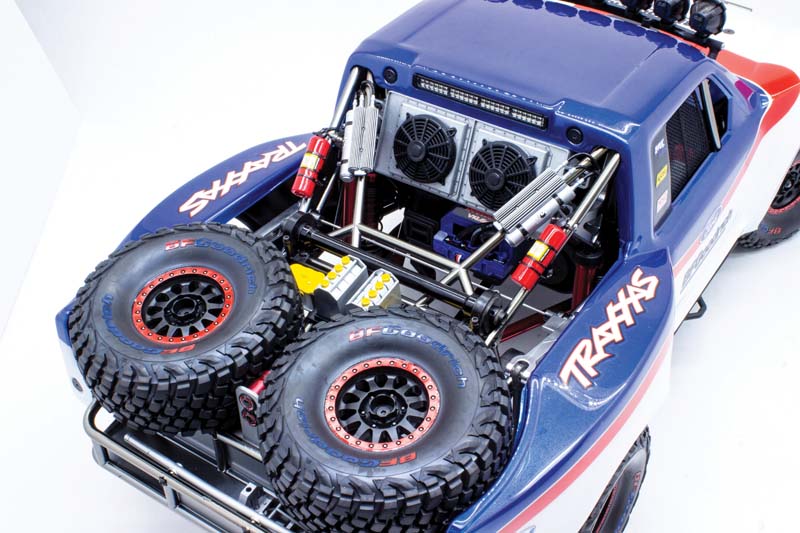 The scale parts that come on the UDR look great but they really come to life when you give them a little detail work.

I put a lot of time and effort into this build and am extremely happy with the end result. How does it perform? Well, if I drive it at all, I’ll be taking it easy but I expect to see a truck that turns better thanks to the rear diff and one that is a little more durable thanks to the RPM parts that have been installed. Deadlines don’t move so I had to skip some of the details that I wanted to add. Don’t worry, I’ll be working on that stuff and showing it to you on the RC Car Action website later.

Text and Images by Kevin Hetmanski