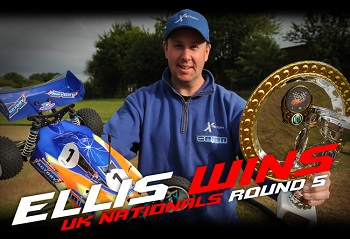 Round 5 of the BRCA 4wd National Championship took the competitors to Oswestry in the mid west of the country on their laid for the event grass track. As usual the grass wore away slightly to leave an almost dirt racing line that stayed fairly consistent all day other than when effected by rain half way through the day.

Qualifying would prove to be a very close affair with 4 different people taking rounds, Ellis Stafford took round 1 with his Orion powered car, then Neil Cragg took round 2 which say many in the later heats not going out on to track after a very heavy rain storm, Neil had put in a very fast run just in time before the rain came but it was just over a second shy of Ellis’s time from round 1.
Round 3 and with the track still very damp and slippy this time it was Simon Moss who took the round making it 3 people in with a chance for the TQ spot. Round 4 and this time Lee Martin took the round but with Ellis coming home in 2nd and Lee not managing to beat Ellis’s fastest time it was Ellis with his Orion powered X Factory supported car that took the pole position from Lee and Neil.

A final 1 got away cleanly only for Lee to make a mistake on lap 2 which Neil promptly copied. This gave Ellis some breathing space and he never looked back taking the leg by some 6 seconds.

Leg 2 was a very different story, Ellis, Lee and Neil really put on a show for the spectators as they traded places for the full 5 minutes and at the end with all 3 cars diving for the finish line it was 10 minutes before the actual result of the final was worked out. Neil taking the leg from Ellis in 2nd and Lee back in 4th. This meant the win was going to be either Ellis’s or Neil’s going in the last leg.
The last leg proved to be the same 3 drivers going at it again. This time though it was Lee Martin who managed to take the leg win with Ellis 2nd and Neil 3rd, so with Ellis’s 1st and 2nd placed finishes the overall win went to Ellis with his Orion powered car with Neil 2nd and Lee 3rd. 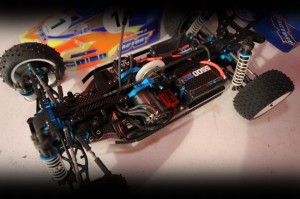