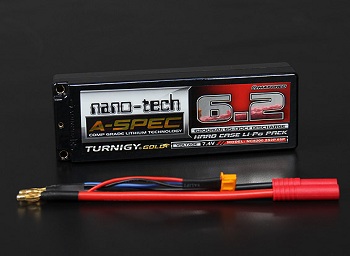 These new LiPos are designed around carbon nano tube technology to produce the least internal resistance, lowest heat generation and highest discharge voltage of any battery on the market. Check out the official press release below for all the details:

In the future, history will tell us that HobbyKing changed the r/c world! One of these changes occurred on the 15th of August 2012 when HobbyKing released the all new A-Spec battery range. Anticipation has been building for the release of the world’s most powerful lipo battery after they were previewed at the 2012 3D Masters. Now they are here!

The secret to the A-Spec’s strength lies in its chemical structure. Designed around Carbon Nano Tube technology it has the least internal resistance, lowest heat generation and highest discharge voltage of any battery on the market. Looking at the batteries, no detail has been spared, even down to the gold plated balance leads for more accurate balancing!

At professional level, these batteries caused a stir at the 3D Masters with sponsored pilots queuing up to try them. This has led to some pilots dropping their current sponsors in favour of the new A-Specs!

In truth these batteries could be sold at a premium as they are that much better than their opposition. However true to HobbyKing’s ethos of being the people’s global hobby shop, they have maintained their in-expensive pricing.

The A-Specs cost around half that of other batteries on the market and have better performance.