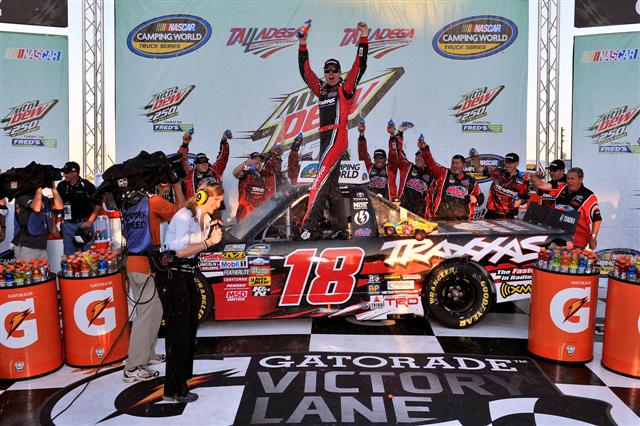 Oct. 30, 2010: The finish in Saturday afternoon’s Mountain Dew 250 NASCAR Camping World Truck Series race at Talladega (Ala.) Superspeedway was so close even Kyle Busch and his No. 18 Traxxas Toyota Tundra team weren’t entirely sure who had crossed the finish line first. But when the dust settled, Busch was posted as the winner by .002 of a second over Aric Almirola, the closest margin of victory in series history when using electronic scoring.

Busch, who led three times for just eight laps, went below Almirola in the final few hundred yards before the finish line and managed to beat him by inches when the checkered flag flew. The win was Busch’s second consecutive victory at Talladega and his sixth Truck Series victory of 2010. Ironically, Busch beat Almirola last year at Talladega by just .057 of a second. “That was cool,” Busch said. “I didn’t want to do it. Man, Aric (Almirola) deserved to win the race and deserved it from last year. I had Johnny (Sauter) pushing on me and I was getting loose through the tri-oval – just trying to stay with the 51 (Almirola). I turned it back to the bottom to try to straighten it back out and I was still loose alongside of him. I thought the 13 (Sauter) was going to my bottom so I wanted to block him. It was just crazy there at the end.
“I can’t thank Traxxas and Toyota enough– these guys do an awesome job here at Kyle Busch Motorsports. M&M’s, Flexco, NOS Energy Drink, Gillette and my good friend Jim Hunter (NASCAR vice president of corporate communications) who passed away last night. Thoughts go to him and his family and everybody. Real proud of all these guys and this is a cool one.”
The victory was Busch’s 22nd career Camping World Truck Series victory in 82 starts, but more importantly vaulted Busch into the lead in the owner’s championship with three races remaining. The No. 18 truck now has a 42-point margin over the No. 30 truck of Germain Racing, which is driven full-time by Todd Bodine, who was involved in a multi-truck accident on lap 91 and finished 18th.
“It’s not over until it’s over,” said Busch, who entered the race 30 points behind the No. 30 truck. “We feel comfortable with where we’re at especially after our win today with our Traxxas Tundra. We’re looking forward to these last three races and it’s going to be a shootout and a fight to the end. We’ll go to Texas next week with Interstate Batteries on board and then to Phoenix with Z-Line Designs and end at Homestead with Traxxas on board.”
Busch now has 83 career NASCAR victories (Sprint Cup – 19, Nationwide – 42, Camping World Truck – 22), and will next fly Traxxas colors at Miami Homestead, the finale of the Camping World Truck Series