Bouncing Fun Under The Sun

Sometimes when you build a rig you have a clear vision of what you want the end result to look like. And sometimes your resident airbrush expert is
a 90’s nerd like the rest of us and just forces your hand. This was the case for the most recent build
that you see gracing the next few pages.

After running some 80s TV themed build ideas by Matt Brase of MR Painting, we were almost set with a Fall Guy project but then someone said Baywatch and Matt’s immediate response was, “Done!” As with everything we get from Matt, his immaculately painted bodies are always one of a kind, flawless and really set the stage for a great theme build. We decided to call our TRX4 Baywatch themed rescue pick-up, Pam. We thought it was a suitable name. 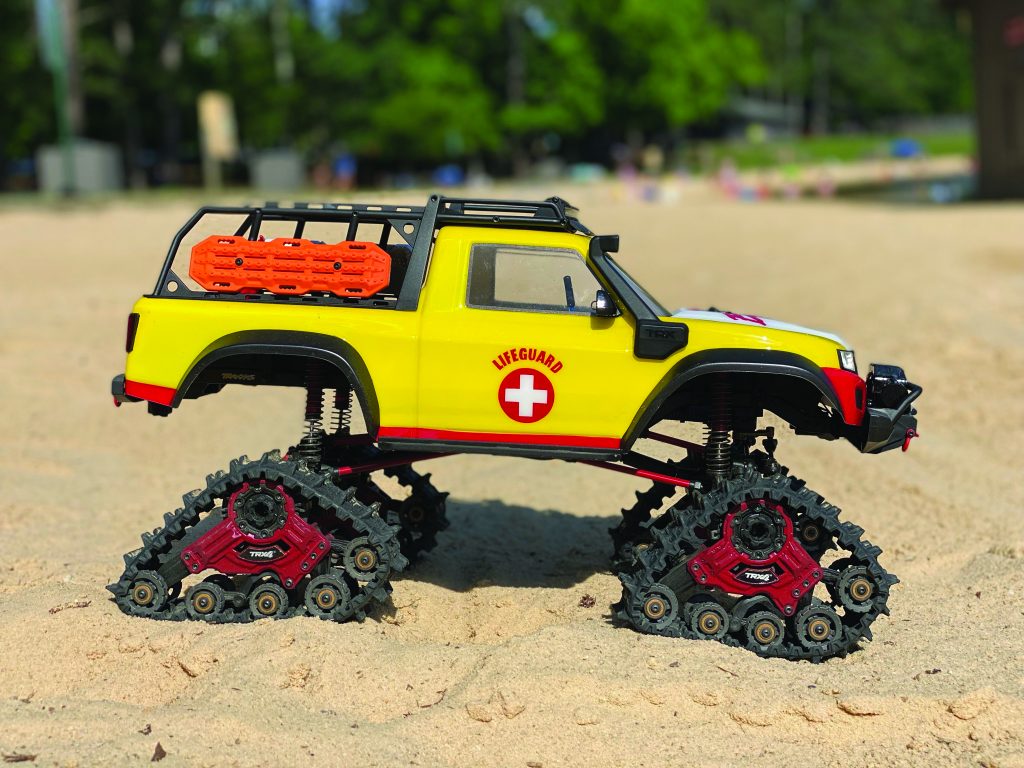 Pam started with a Traxxas TRX4 Sport kit 82010-4 and a set of TRX4 inner fenders. Getting it assembled per the instructions was a breeze; the kit goes together super easy and gives you a clean blank slate to mold into any truck you want. From there, we dove into our Traxxas spare parts bin that always continues to surprise us the deeper we dig into it.

Although the real Baywatch beach vehicle had tires, we did have enough parts to put a set of the Traxxas deep Traxx together to mount on it. Knowing it was going to be in sand and water, we used bushings instead of ball bearings to make it easier to clean after running it. We didn’t want to sacrifice perfectly good ball bearings to the sand gods either. 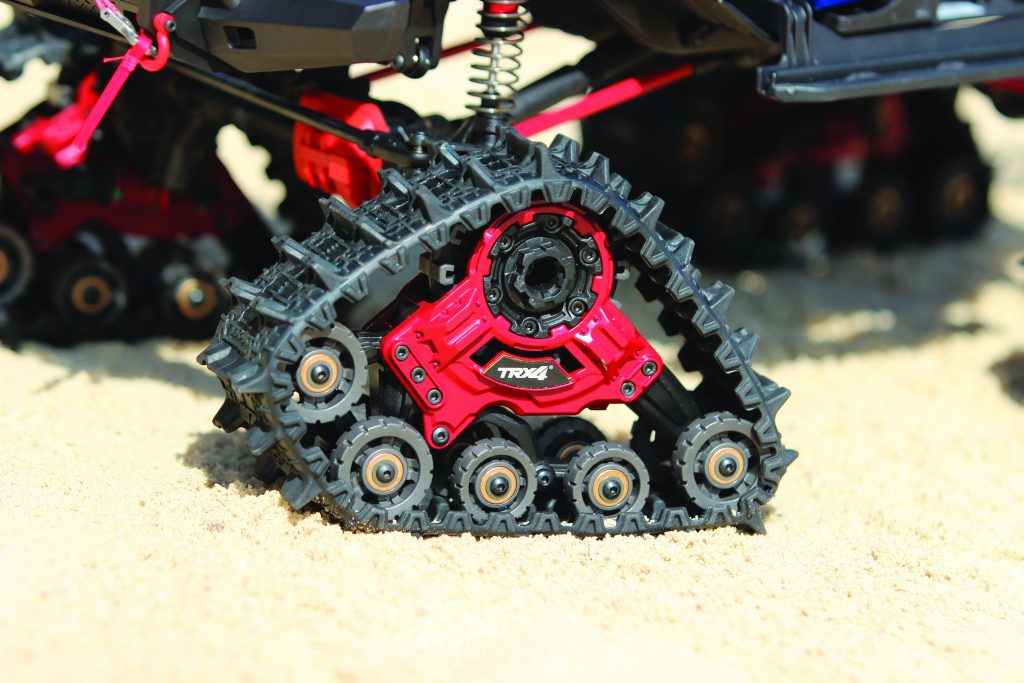 We mounted a set of Traxxas Traxx on our beach going TRX4.

The next gem we found in the parts bin was a Traxxas drag motor that was previously pulled out of their old funny car. The motor is a 2400kv 1/10 550-Sized motor that seemed like a good option for the TRX4. We could have gone with a 3351R Motor Velineon 3500 brushless but there was a cool nostalgic look to the ribbed blue case and the 550 size fit perfectly. We also found a 2-speed transmission in the bin that was already locked out for hi gear so with the motor and transmission set for speed, we needed to feed it power.

Further digging scored us a Traxxas VXL-6S Velineon Brushless ESC 86086-4 pulled from an E-Revo 2.0. Being that the ESC is waterproof, its installation into the beachcomber was a no brainer. The VXL-6S is complete overkill but we planned to feed the motor at least 3S LiPo power and running in sand with the tracks attached, plus the use of high gearing, we didn’t want load or heat to be an issue. The ET-3 motor was made for Traxxas by Castle Creations several years back and a quick call to them taught me that you can feed the motor more than the recommended 3S battery but if you did, it will eventually get hotter and hotter and eventually demagnetize itself and stop working. 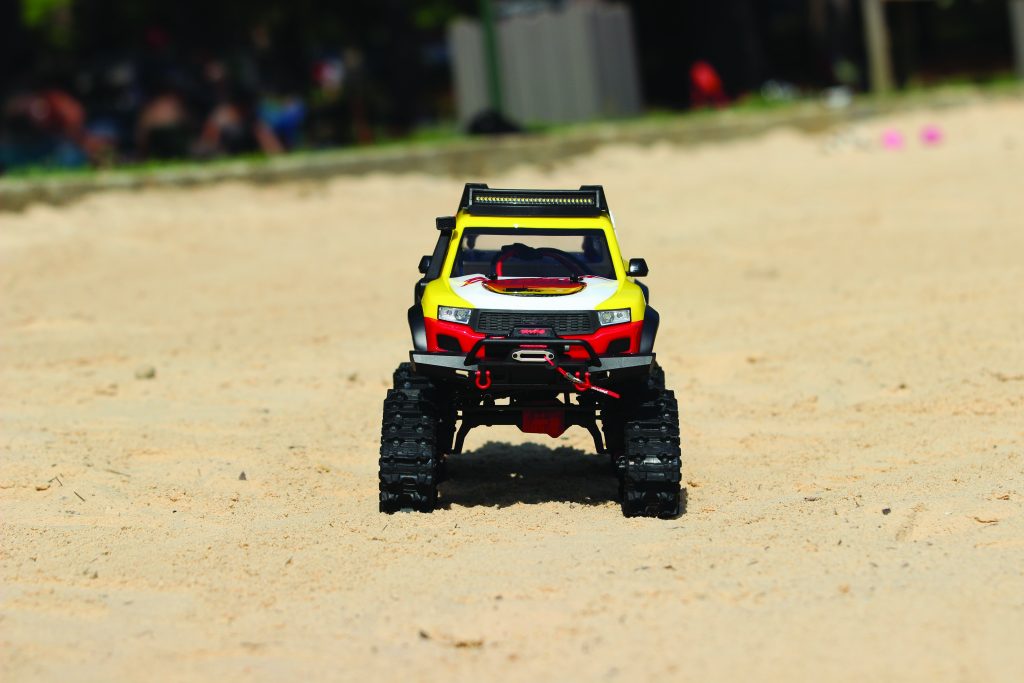 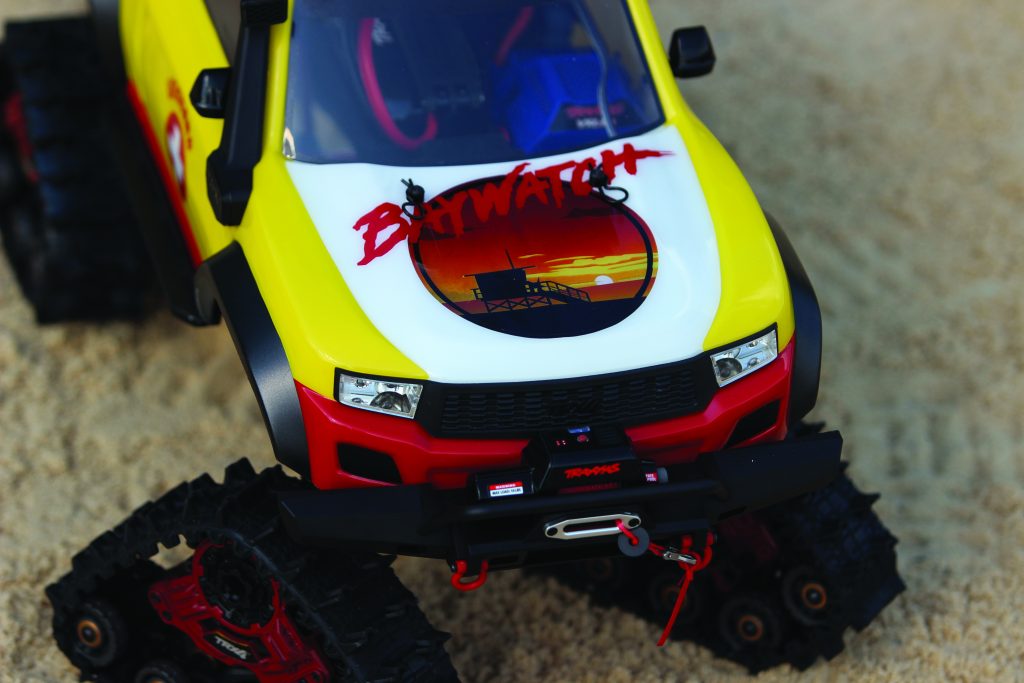 After getting the motor and ESC installed, the only electronics left were a servo and receiver, back into the bin I went. I eventually fished out what looked like a tangled mess of coolness including a Traxxas 2255 servo. The 2255 is a digital high-torque 400 brushless metal gear servo that is fully waterproof, perfect for this build. I also installed a Traxxas 6533 stability management TSM TQi 2.4GHz five-channel receiver, a BEC and also some telemetry goodies like the Traxxas 6553X TQi Telemetry Expander 2.0 and GPS speed module with temperature and RPM sensors mixed in. All this tech will help us keep tabs on whether or not we are overpowering the motor or not and besides, its cool to see what kind of speeds we can get out of Pam too. 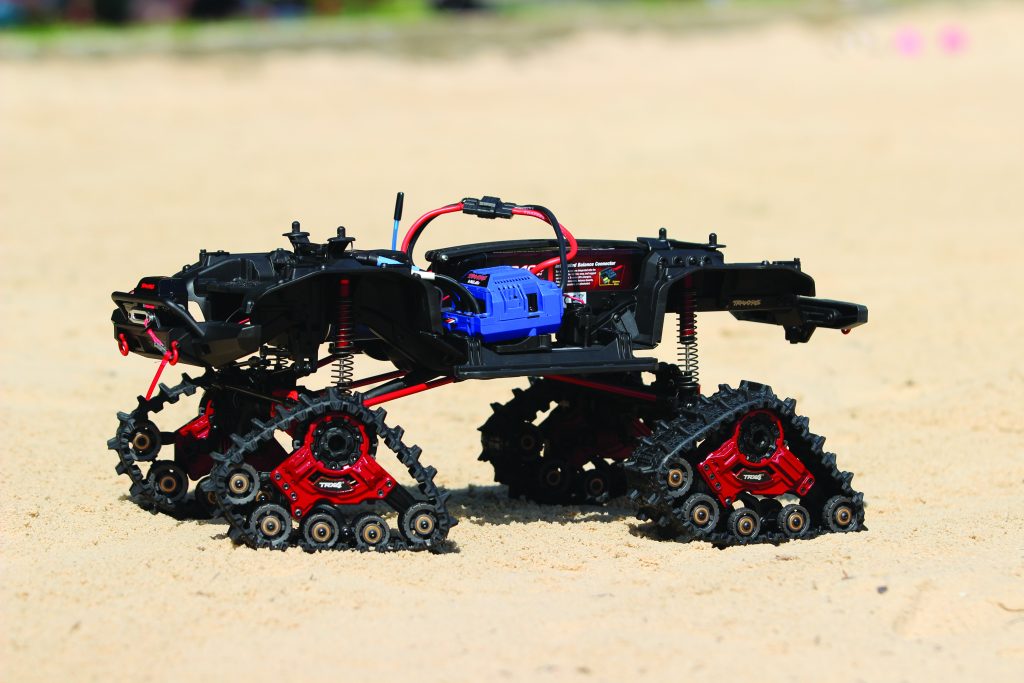 With everything installed, it seemed to be missing something visually so the Traxxs were pulled apart and painted red to match the body. While we did that, we figured that we’d also install a complete Traxxas 8140R TRX4 red colored long arm lift kit. The lift kit gave the truck the extra height and suspension travel that it needed. Now it looked right.
The TRX4 Sport comes with a scale bumper but we switched it out for a Traxxas 8867 winch bumper to install Traxxas’ newly released 8855 Pro Scale Winch with remote instead. The scale winch has a ton of features including two-channel operation, ten pounds of pulling power, auto brake and also a free-spool. 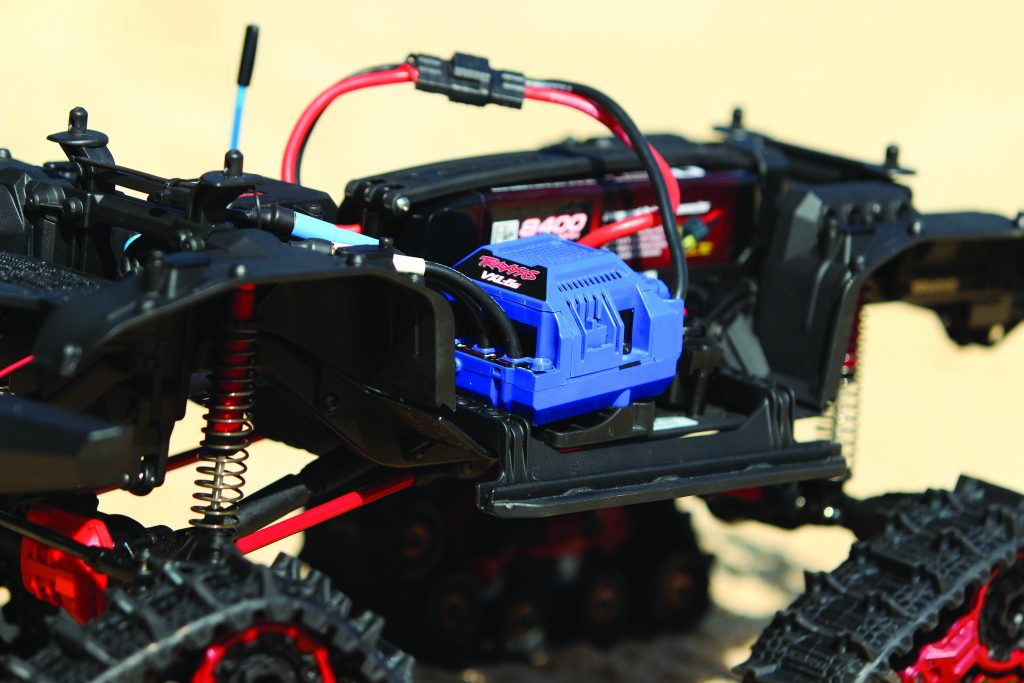 The Traxxas VXL-6S Velineon Brushless ESC 86086-4 is waterproof, perfect for this beach beauty. 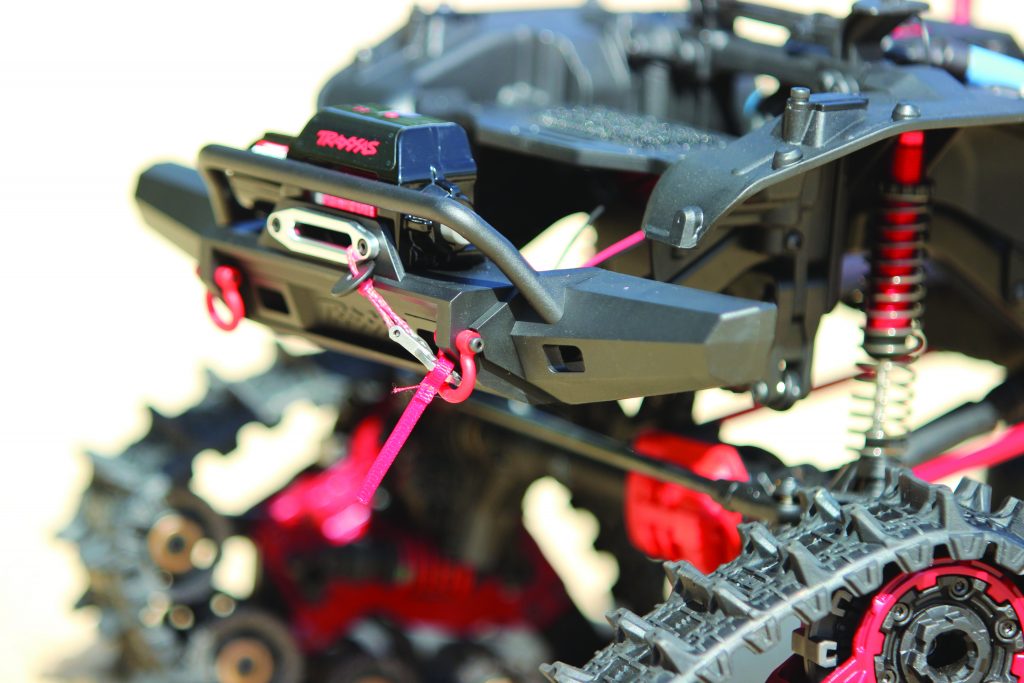 The Traxxas 8867 Winch b\Bumper is fitted with the newly released 8855 Pro Scale Winch .

Traxxas has always had great lighting options including light bars and headlight/taillight buckets to give your Traxxas body that extra realism. We added the standard lighting options to the body and wired them up to work with our Frankenstein’d electronics. We were happy to see that the lights worked, as they should, to light the way for scaled down beach rescues. Traxxas does have a new series of Pro Scale lighting that gives even more functionality such as high- and low-beam headlights; turn signals; brake lights; reverse lights; and hazard signals. We will probably upgrade to the new lights when we get our hands on them down the road. 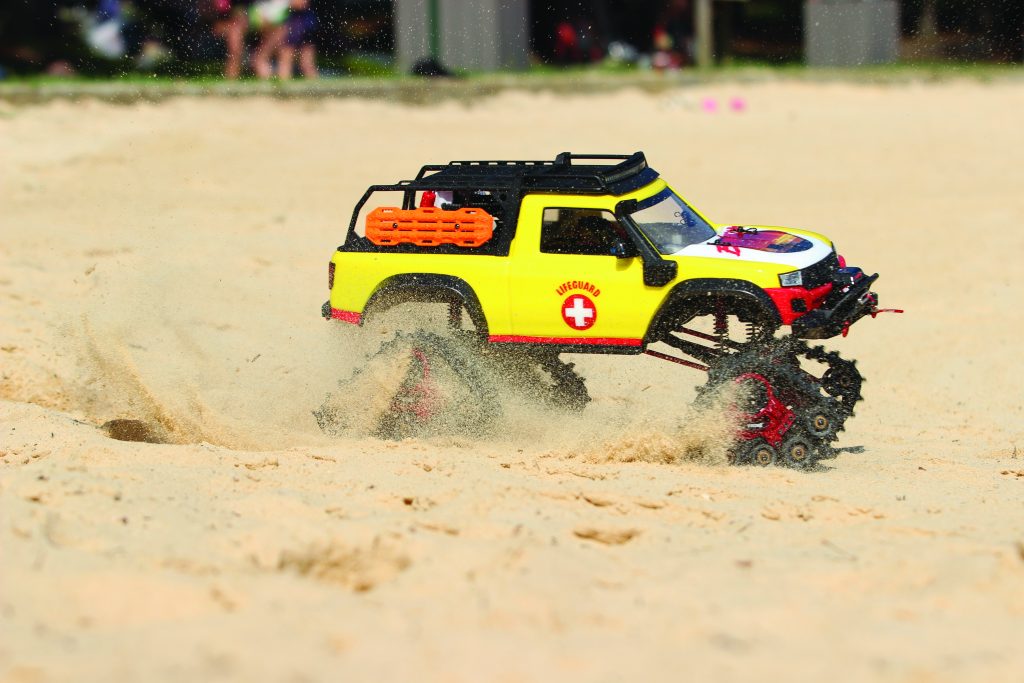 We headed out to the beach to see what Pam, our Baywatch pick-up could do. We ripped around the beach for a while during the photo shoot and found that it was a complete blast to drive. The ample suspension allowed Pam to bounce along the beach’s sand dunes without any issue. The suspension absorbed impacts and kept Pam upright. The Traxx kicked up sand like a toddler running by you on the beach and the gobs of power it produced got us up to an impressive 42 mph (in sand!) before running out of beach and hitting the thermal cutoff.

For a build that initially had no real direction except for an awesome paint job, we are stoked on how it came together. It is completely over the top and is exactly what we would want to have in a 1:1 vehicle that was meant to drive around the beach. As we sat there during the photo shoot, our Baywatch tribute truck got constant attention from everyone on the beach. Be bet some people even recorded slow motion video of it running in the sand. Without a doubt, the pick-up named Pam would get the approving nod from the Hoff. 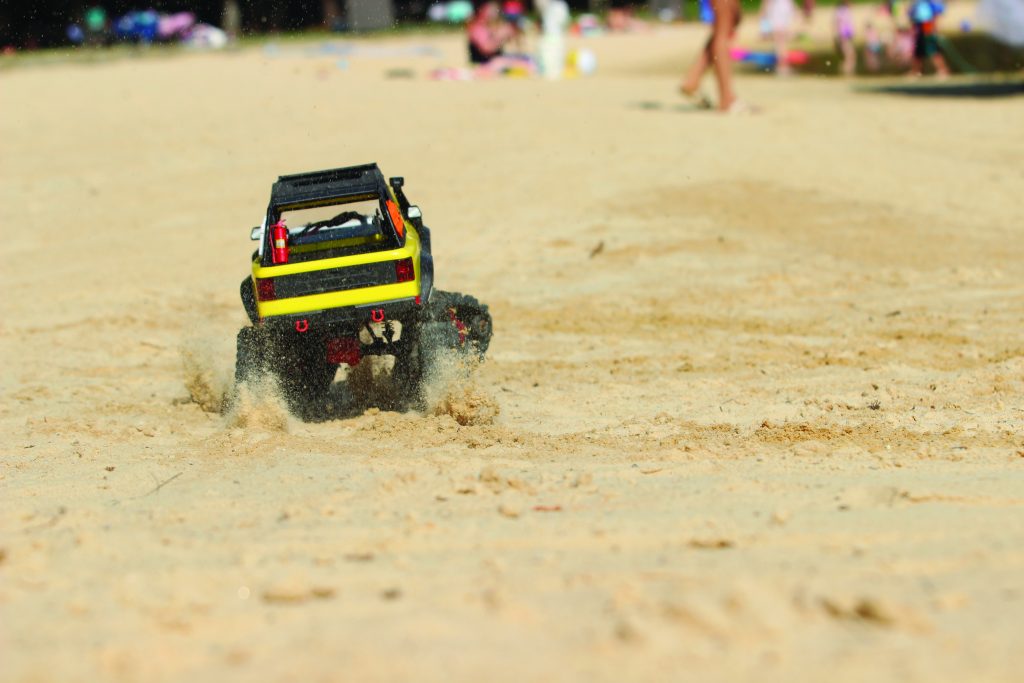 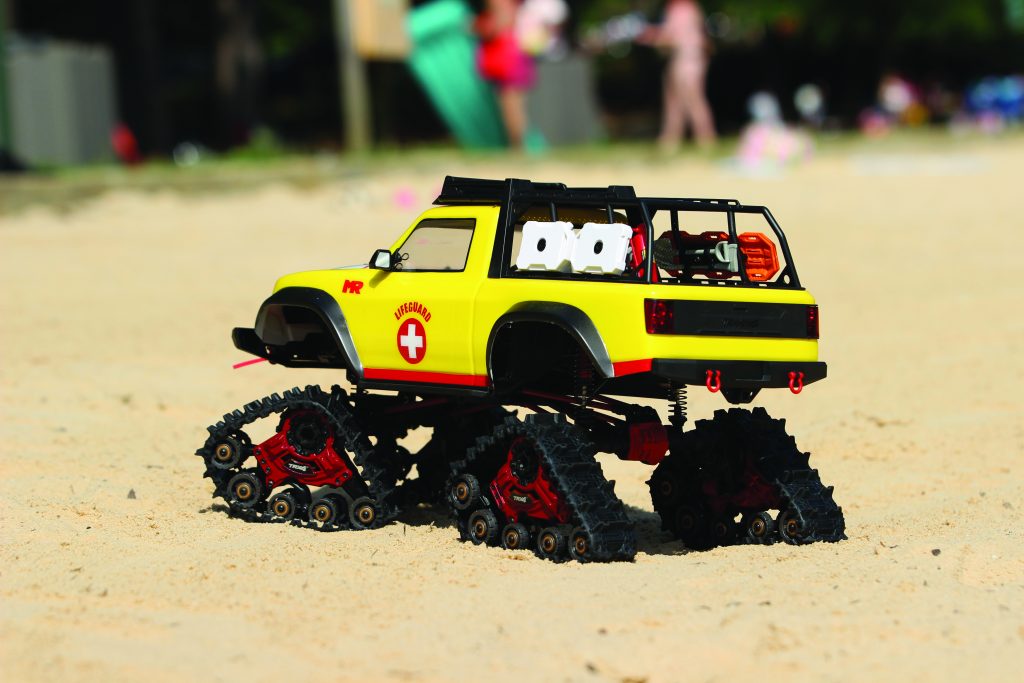 Thanks to its Deep-Terrain Traxx, the TRX4 sure kicks up a lot of sand. 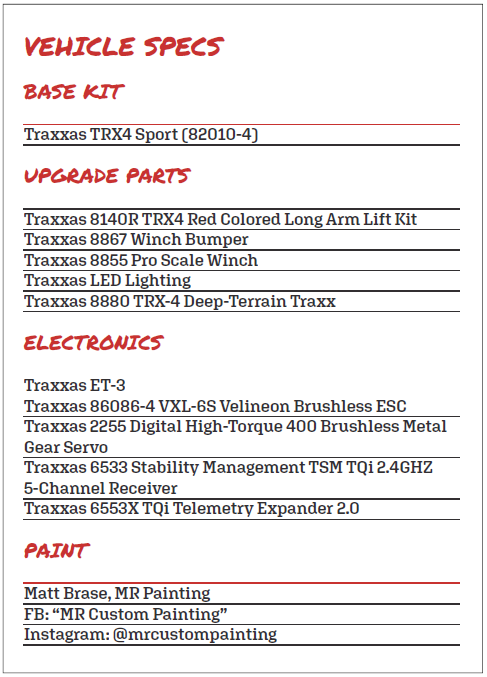