The Traxxas TORC series tore up the Chicagoland Speedway Route 66 Raceway. On Wednesday, the PRO Light trucks took to the track with RJ Anderson taking the win. MX superstar James “Bubba” Stewart traded in his typical 2-wheel racer for a TORC truck. Stewart is a champion MX racer and was sponsored in his TORC debut by Red Bull, Oakley and Traxxas. Speaking of Traxxas, Traxxas drivers rounded out the podium with Andrew Caddell taking second and CJ Greaves in third.  Stewart finished 13th in his first appearance in a short course race and this is after rolling the truck in practice.

In the Pro 2WD class, Traxxas Jeff Kincaid took the win followed across the finish line by Marty Hart and then Brendan Gaughan.

Thursday was round 11 of the 2011 Traxxas TORC season. PRO LIGHT was won by 17-year old RJ Anderson who proved his previous victory was no fluke. He was followed by Traxxas’ Keegan Kincaid and drifting champion Sam Hubinette. Stewart returned for a second try at TORC racing and finished a very respectable 6th.

In the PRO 4X4 class, Ricky Johnson backed up his win from the day before with another victory. This time his rival in the point series, Johnny Greaves, finished second. Scott Douglas grabbed the last podium spot. Only four points separates Greaves (first in points) from Johnson as they go into the last two races. 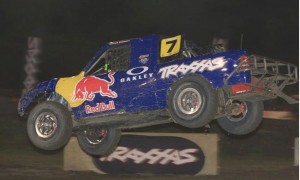