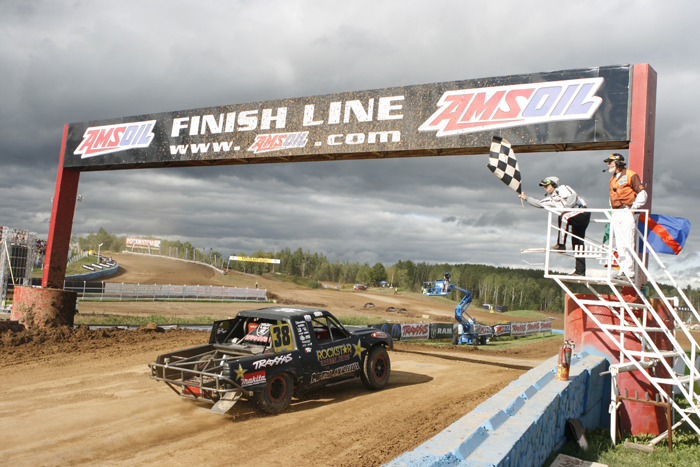 Senior Editor Kevin Hetmanski and I recently travelled to the Northwoods of Wisconsin for Rounds 9 and 10 of the Traxxas TORC series. When we arrived at Crandon International Off Road Raceway in Crandon, WI, we discovered we were in for some extra racing as Round 4 of the series, which had previously been rained out, was rescheduled for Friday. Round 4 was originally on the calendar for June 19 at Crandon, but heavy rain caused racing to be cancelled for the day. The Traxxas TORC series visits Crandon twice a year and the fall race we were attending concludes with the simply awesome Amsoil Cup which pits PRO 2WD trucks against PRO 4X4 trucks. The end result? We were going to be treated to a whole lot of pro off-road short course racing. 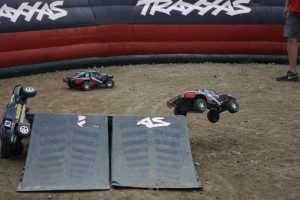 The Traxxas TORC events have a lot of RC going on in addition to the awesome full-size racing.

Friday went by fast, but featured some absolutely great racing. One of the best races of the day was in the Super Buggy class. Traxxas sponsored young gun CJ Greaves chased Larry Job for the entire race. After many attempts, Greaves eventually pulled off a last turn pass and crossed the finish line only inches ahead of Job. Greaves, however, was not declared the official winner. Just as we do in RC, the Traxxas TORC series uses transponders in the vehicles and a computer lap counting system for scoring. It turns out that Job’s transponder was mounted closer to the front of his buggy than Greaves’. At the time, photo finishes were not used to confirm finishes, so Job was scored as the winner since his transponder crossed the line before Greaves’. On Saturday, new rules went into effect that initiated the use of photo finishes and an established standard location for transponder mounting. 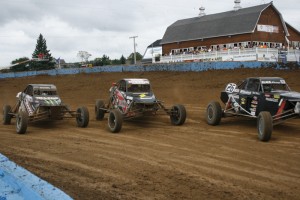 The competition is very close in the Super Buggy class.

Traxxas’ Andrew Caddell led from the start to the finish to get the win in the PRO LIGHT class on Friday. Crandon veteran and Traxxas racer Jeff Kincaid did the same in the PRO 2WD class as he too led the whole race. Team Traxxas was certainly off to a great start.

In PRO 4WD, Adrian Cenni drove away with the win and the Oakley Bomb award for the fastest lap. It was his first win in the Traxxas TORC series. Traxxas’ Mike and Mark Jenkins finished 6th and 8th, respectively. 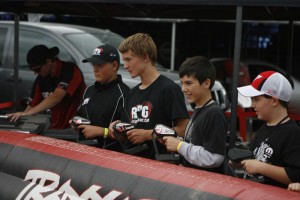 These kids are all smiles at the Traxxas Try-Me Track.

Saturday’s Round 9 racing was significantly delayed due to heavy rain in the morning. When the action got underway, Larry Job took the win in the Super Buggy class. Traxxas’ Andrew Caddell repeated his performance from the previous day and got his second win of the weekend. Jeff Kincaid was well on his way to doing the same in the PRO 2WD class until he was forced to drop out due to mechanical failure. Adrian Cenni got his second career win and second of the weekend when he once again ran away from the rest of the PRO 4X4 field.

Sunday turned out to be another rainy day, but instead of having heavy rains that eventually moved out, it rained significantly and then kept on raining on and off. This was one stubborn storm as just when we thought it was over, it would briefly rain again. While some drivers were saying there was no way the entire Round 10 program would be able to be run, the track crew was actually able to get the track in shape for racing.

Adrian Cenni once again got a great hole shot, out paced the entire PRO 4X4 field and took win. Traxxas’ Mark Jenkins took second in an impressive come from behind effort. Jenkins suffered a blown tire but was able to have the rubber changed during the competition yellow at the halfway mark. He worked his way through the 12 truck group to earn a podium finish. 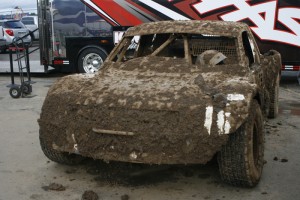 The amount of mud was out of control at times.

The PRO 2WD class was an absolute mud fest and it was often hard to identify the trucks which were absolutely covered in grime. After a lot of carnage, Bryce Menzies took the win. In PRO LIGHT, Brian Deegan (founder of the famous Metal Mulisha of freestyle MX) won, but was pressured by Andrew Caddell who charged hard as he worked his through traffic to finish second.

The Amsoil Cup only had two PRO 2WD entries which took off with a head start over the chasing PRO 4X4 trucks. While heavily favored to win, Adrian Cenni suffered a flat tire on the first lap of the 10 lap race and dropped out of competition. Chad Hord was, however, able to take his PRO 2Wd truck to victory and claim the $25,000 in prize money.