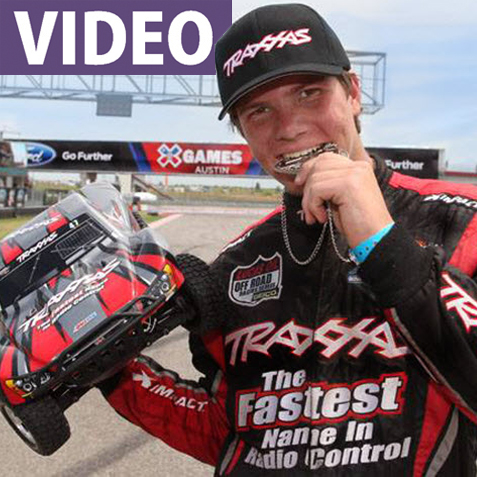 If you missed the live telecast on Sunday, you can watch the  Traxxas-presented Speed Energy Formula Off-Road series action from the X-Games below. Traxxas’ Sheldon Creed took the silver medal at the Games, but no more spoilers (unless you read the Traxxas release below) — watch the video!

If  the video makes you hungry for more SST racing, feel free to blow the rest of the afternoon YouTube. 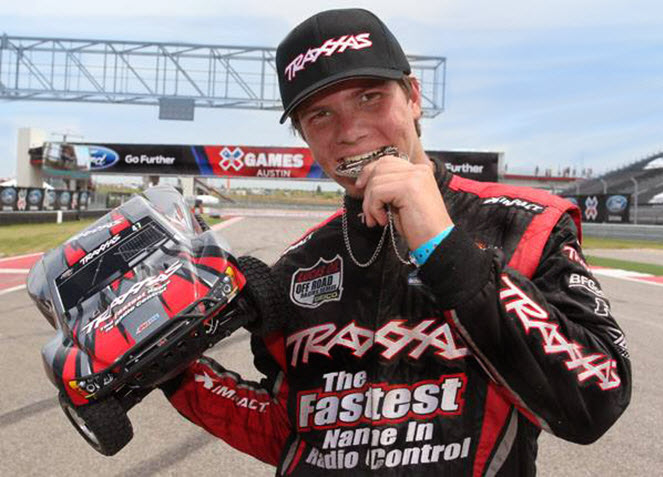 Formula Off-Road presented by Traxxas put on a spectacular show for X Games and off-road racing fans at the Circuit of the Americas in Austin, Texas. Door-to-door big-air jumps, high speed corners, and bumper-to-bumper action—it was all there.

Sheldon Creed, driver of the red #74 TRAXXAS Super Stadium Truck, started the final race on Sunday by launching off the line into second position, followed quickly by Keegan Kincaid in the blue #47 TRAXXAS truck. On lap 4, Creed took the lead. However, on lap 9 Apdaly Lopez, who had just run the Baja 500 the day before, made a pass for the lead and never looked back during his gold medal winning run.

Creed drove a solid and smart race. A well-timed joker lap gave him a comfortable distance from Gordon on the final lap, solidifying his second place position, and taking home the X Games silver medal. Robby Gordon ran a very convincing race, with the added excitement of going up on two wheels and saving his truck. Gordon’s efforts netted a third place finish and the bronze medal.

Robby Gordon, driver of the orange Speed Energy/TRAXXAS truck, started the race in 9th position and would charge his way through the field and battle to a third place finish, but not after giving Creed a run for his money.

Not all the action was on the track, though. Traxxas was at the X Games with an onsite Try-Me-Track, where attendees could take the wheel and drive Traxxas vehicles; a full display featuring the latest Traxxas products, including the award-winning Slash short course trucks; and a demo area where spectators could watch high-flying R/C freestyle featuring the 65+mph Traxxas E-Revo Brushless Edition electric powered monster truck.

The Super Stadium Trucks seen on course at X Games are scaled-up versions of the popular Slash lineup of short course trucks. The Slash short course trucks are tough, aggressive, fast, and nimble like their full-size counterparts, except you can park a Slash on your workbench for under $250.