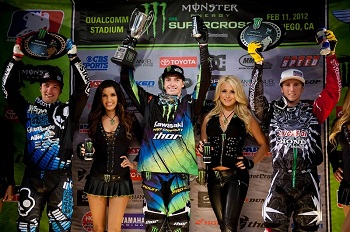 San Diego’s Qualcomm Stadium played host to the sixth round of Monster Energy Supercross on Saturday 2/13, in what was probably the most unforgettable night of the series we have seen so far.

Up until Saturday night, the 2012 season for Pro Circuit/Kawasaki/Traxxas’ Dean Wilson had been frustrating. He arrived in San Diego with a sizeable 22-point deficit to Eli Tomac, the Supercross Lites West Region Championship points leader at the time. Wilson’s goal was to finish on the podium, make up as many points as possible on Tomac, and leave healthy as the West Region prepared to go on its annual midseason break. In San Diego, however,Deano’s luck turned around and he ended up having one of the most memorable nights of his career.

Wilson set a good pace during practice, and was feeling confident and relaxed the entire day. The track was tough, and many riders were having trouble getting through a noticeably large set of whoops. Wilson, however, flowed through them easily. He set a blistering pace in his heat race and took the first win of the night.

Wilson’s flow carried on to the Supercross Lites Main Event, as he quickly charged to the front of the pack and took the early lead. He was feeling good about being able to make up some ground on Tomac, who sat a few positions behind him.

Wilson ended up leading every lap in the main event, and earned his second win of the season. In an unbelievable turn of events, Tomac found himself on the ground, unable to continue. The incident resulted in a DNF for Tomac, vaulting Wilson into the points lead. He now sits two points ahead of Tomac in the Supercross Lites West Region Championship, with just two rounds remaining.

“This race was amazing,” said Wilson. “I felt good all day. I got a good start and just clicked off laps. I was so happy afterwards because I didn’t expect to make up 24 points. Now that we’re going on break, I’m just going to start getting things dialed for outdoors, but will still be training and focused on Supercross for when we start up again in Seattle.”

Broc Tickle, the team’s only rider in the Supercross Class, has been feeling comfortable and confident aboard his Pro Circuit/Kawasaki/Traxxasmachine. He’s been focused on making steady improvements with each race, but experienced a bit of a setback in San Diego as he suffered from a tumble in the Supercross Class Main Event. Tickle wants to use Saturday’s race as a learning experience, and focus on this weekend’s race at Cowboys Stadium.

Traxxas is proud to support the the Pro Circuit/Kawasaki team. Be sure to watch Round 7 of the AMA Supercross series as 250 East action heats up Cowboy Stadium in Dallas TX! Watch LIVE on SPEED, 9:30pm ET!

Attending a 2012 Supercross race? Be sure to visit Traxxas during the Pit Party! Take a drive with a Traxxas Slash on the Try-Me Track. See exciting Traxxas stunt demonstrations with the E-Revo and Slash 4X4. Check out the full line of Traxxas models on display–and enter to win a Traxxas Edition Kawasaki KX250F or Kawasaki Edition Slash! Everyone’s invited to experience Supercross with The Fastest Name In Radio Control.