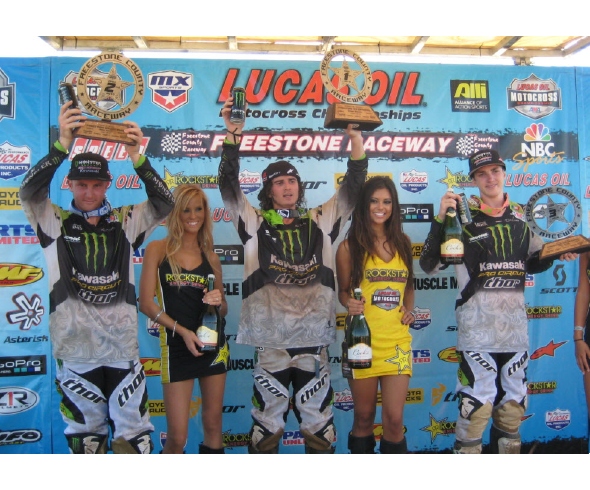 Wortham TX: The second race of the 2010 AMA Motocross outdoor season came to Freestone County Raceway, and the only thing hotter than the action on the track was the weather itself. The Pro Circuit/Kawasaki/Traxxas team showed their grit and stamina by sweeping the podium despite the punishing conditions.

Riding in fourth place, Christophe Pourcel had the highest position of the Pro Circuit/Kawasaki/Traxxas riders as the first 250 Moto roared away from the green flag. With a full 30 minutes of racing ahead, Pourcel had ample opportunity to reel in the front runners on his way to the win. Blake Wharton was the first to get an eyeful of the fast Frenchman’s rear Dunlop, followed by Cole Seeley, and finally Eli Tomac, the rookie winner of the first round in Sacramento. Pro Circuit/Kawasaki/Traxxas teammate Dean Wilson also made the Moto-one podium with third place, while Jake Weimer and Tyla Rattray finished fifth and sixth respectively.

In Moto two, Eli Tomac got the holeshot but was hardly in the clear as Dean Wilson was on his fender and ready to pounce. Tyla Rattray was the only other Traxxas-sponsored rider to make it to the top-ten of the field at the start, running in sixth. Chistophe Pourcel was in twelfth, but the punishing Freestone track and the withering Texas heat would provide ample opportunity for weaker riders to fade as the ironmen flourished. At about the 13-minute mark, Dean Wilson overtook Tomac for the lead. His Traxxas-sponsored teammates had been busy as well; Rattray was running fourth, Pourcel was in eighth, and Jake Weimer was in thirteenth out of 35 riders. Eight minutes later, Rattray overtook Tomac to move into second behind teammate and race leader Dean Wilson. Rattray closed the gap on Wilson during the final lap, and Wilson waived his teammate past, on the assumption Rattray was a lap down. Moments later, Broc Tickle surprised Wilson at the finish line and bumped him to third, giving the overall win to…Christophe Pourcel! Pourcel finished fifth in Moto Two, earning enough points along with his Moto One win to take the overall win. Joining him on the podium was Tyla Rattray with second overall, and Dean Wilson, who was no doubt thankful his error did not cost him an overall podium position. Said Wilson after the race, “I thought I had a huge lead and just wasn’t paying attention.Tyla got around me on the last lap, I let him by. I thought he fell and needed points, so I said, ‘go ahead.’ Then I saw him fist-pump at the finish line and my heart just shattered.”

With the Freestone Nationals in the record books, the AMA Motocross points totals show Christophe Pourcel in first by nine points, with Dean Wilson, Tyla Rattray, and 250 West Supercross champ Jake Weimer also in the top ten with third, sixth, and seventh respectively. The next race is at High Point Raceway in Mt. Morris, PA. Watch the action on Speed, June 13, 6pm Eastern (3pm Pacific).