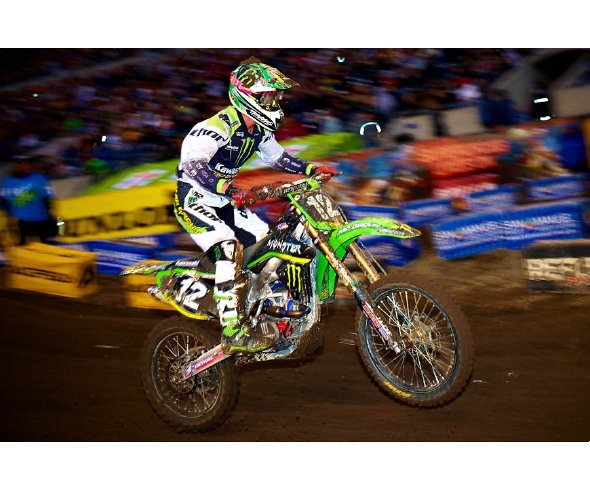 Seattle, WA: With the Supercross 250 East championship wrapped up for Monster Energy/Pro Circuit/Kawasaki/Traxxas racer Christophe Pourcel, race fans once again turned their attention to the 250 West series and points leader Jake Weimer, also of Monster Energy/Pro-Circuit/Kawasaki/Traxxas. With four wins in six races before the break for east-coast action, Weimer had made it look easy—but it would not be an easy night for him in Seattle.

In Weimer’s heat race, the loose and sandy track got the better of a number of riders as soon as the race began, including Weimer who drifted wide in the loose soil and went down as he tangled with the Tuff Blocks. He quickly remounted, only to stall his bike. With only nine riders transferring to the Main, Weimer had to be certain he made every jump, whoop, and berm count or else look to the Last Chance Qualifier for a ticket to the big show. Weimer worked his way steadily through the field to tenth, finally moving into ninth (and onto the Main) just as the white flag flew.

As the Main went green, the deeply-rutted course again took a toll on the field as a group of riders face-planted into the sandy track. Weimer took a spill in the whoops, recovering to 18th place, before the first lap was done. Weimer made short work of the back-half of the field and moved up to eighth by lap three and fifth by the race’s halfway point. Meanwhile, teammate Josh Hansen raced from seventh to third as Weimer continued his chase on the field. As the race entered its final five laps, Weimer passed Hansen to move into third, and held his position to the finish.

Seattle marked Weimer’s sixth trip to the podium in seven races, and although not the win he was aiming for, third place proved more than sufficient to keep Weimer on top of the leaderboard with a 19-point lead over second place.

There’s just one more round of Supercross 250 West action to go! Catch all the action from Rice-Eccles Stadium in Salt Lake City on Speed, May 2, 6pm Eastern (3pm Pacific).

Based in Plano, Texas, Traxxas has been building the world’s fastest Ready-To-Race® radio controlled vehicles for over 23 years. Traxxas models are sold exclusively in Hobby Stores, 4-Wheel Parts, and Pep Boys