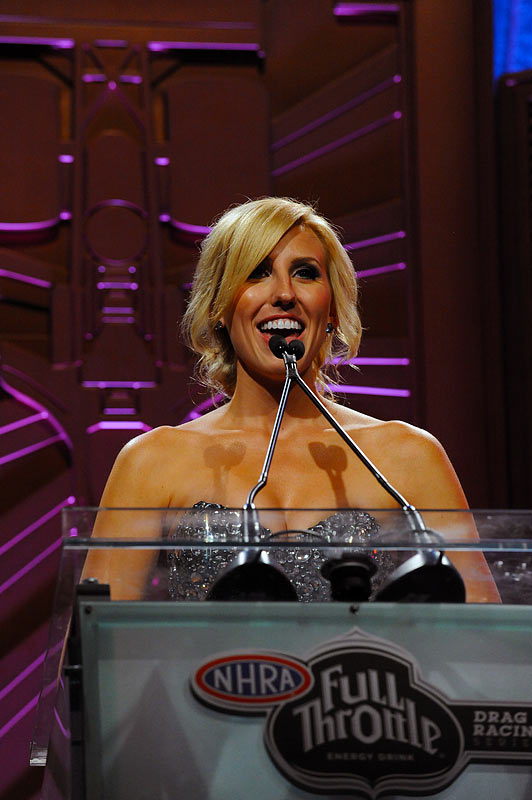 Courtney Force, the 24-year old driver from Yorba Linda, Calif., entered her rookie season with high hopes but grounded expectations behind the wheel of her Traxxxas Ford Mustang. The day after she earned runner-up honors at the 48th annual Auto Club NHRA Finals, the Cal State-Fullerton graduate was recognized at the Hollywood & Highland Center in Hollywood as the Automobile Club of Southern California Road to the Future award winner, recognizing her as the 2012 NHRA Rookie of the Year. The youngest daughter of 15-time NHRA Funny Car champion and team owner John Force continued the John Force Racing tradition becoming the fourth team driver to win the prestigious award.

“It’s such an honor to have earned the Auto Club Road to the Future Award for top Rookie of the Year. It’s huge for our team and it really says a lot for my crew members. We’ve had a great, consistent race car all season and we were really working hard for this award, but there are some great competitors out here that I’ve had to compete against head-to-head and they’re tough,” said Force. “I’m very honored and excited to get it this year. It definitely was a tough year to go for it and I’m very happy to join the rest of my teammates who have received this award before me. I’m definitely looking forward to next season with my Traxxas Ford Mustang team.”

The former Super Comp and Top Alcohol Dragster racer qualified for every event during the 2012 NHRA Full Throttle Drag Racing Series, was No. 1 qualifier twice (Indianapolis and Dallas), reached four finals (Chicago, Denver, Seattle and Pomona2) and picked up for first career win in Seattle.

The win in Seattle was impressive considering it was Force’s 15th career start and she began race day from her worst qualifying position of the season, No. 14. She defeated three NHRA Funny Car world champions Cruz Pedregon (1st round), John Force (semi-finals) and Matt Hagan (finals) en route to the victory.

“Speaking for myself and Traxxas, we are honored to have such a fierce competitor and class act as Courtney Force representing our brand. Her winning spirit, integrity of character, and the rock solid support and dedication from her team have allowed her to excel in her rookie season and she truly deserves the title Rookie of the Year. We know there are more great things yet to come from Courtney and we are already looking forward to what 2013 has in store,” said Mike Jenkins, Traxxas president.

“Even when Courtney was challenged on the big end of the track several times this year, we were all impressed with how her talent and instinctive car control skills kept her and her competitors safe. The team’s persistent drive to win delivered Courtney’s first professional victory in Seattle as a rookie. Courtney has proven herself with fans as well, earning a place in the Traxxas Nitro Shootout through a dominate share of the fan vote that helped her win the lottery drawing.”

She was the lone rookie to compete in the inaugural Traxxas Shootout qualifying as the fan vote and lottery winner. As one of only two rookies (Force and Scotty Pollacheck/PSM) to qualify for the 2012 NHRA Countdown Force finished the season No. 5 in the Full Throttle points behind her teammate Mike Neff (No. 3) and in front of teammates Robert Hight (No. 7) and John Force (No. 9).

x – Runner-up in Rookie of the Year balloting to Jason Line, who won four Pro Stock races, was runner-up in four others and finished second in points

If you like this article, check out this additional article on Traxxas Racing.