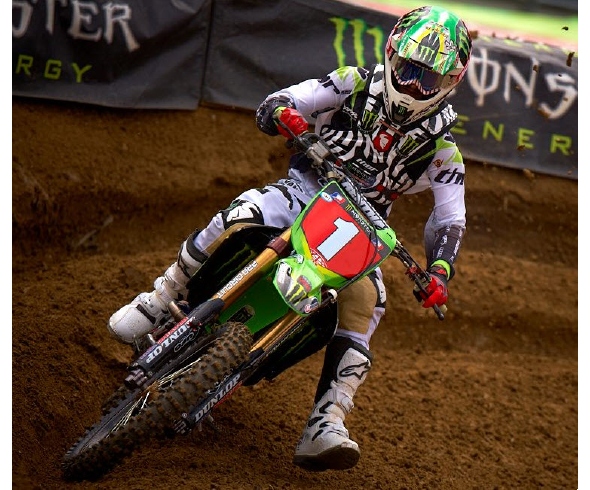 Latest race news from Traxxas:Traxxas-sponsored Christophe Pourcel is back on top! After winning the first three rounds of the 250 East series, bad luck bumped Pourcel out of the winner’s circle in rounds 4 and 5. As Supercross action came to Jacksonville, FL, Pourcel was back in top form and ready to extend his points lead in the Lites series.

Pourcel won his heat race handily, leading every lap from holeshot to checkers. In the Main, Pourcel rocketed his Pro Circuit-prepped Kawasaki KX®250F to the front, only to get pinched to the inside and pushed back to fourth as the full field roared into turn one. Pourcel moved into third behind rivals Austin Stroupe and Brett Metcalfe as the riders settled into place, and the chase was on. Whether racing up through the field or defending a lead, Pourcel never seems hurried or frenzied, and once more in Jacksonville, Pourcel demonstrated his effortlessly smooth riding style. Hanging close to Metcalfe and Stroupe, Pourcel waited for the dueling front-runners to leave the door open. At the end of lap six, Pourcel made a clean pass on Stroupe to take second. As quickly as the announcers could say Pourcel had made the pass, he overtook Metcalfe to secure the lead. From there, Pourcel opened an ever-widening gap on Metcalfe, Stroupe and the rest of the field, building a cushion that would ultimately save the race for Pourcel. On lap 12, as slower riders were blue-flagged to make way for the leaders, a rider went to the inside unaware that Pourcel was going to take the same line. Pourcel and the lapper made contact, knocking Pourcel off his bike. He recovered in time to maintain his lead, but the lost time allowed Stroupe to close the gap. With three laps to go, Stroupe made a valiant effort to catch Pourcel, but Pourcel was utterly unflappable and rode as smoothly and confidently as ever. For the fourth time in six races, Pourcel flew over the finish line to take the win.

The next stop on the 250 East Supercross circuit is Reliant Stadium in Houston, TX. Catch all the action on Speed, Sunday April 11, 3pm Eastern (12pm Pacific)!