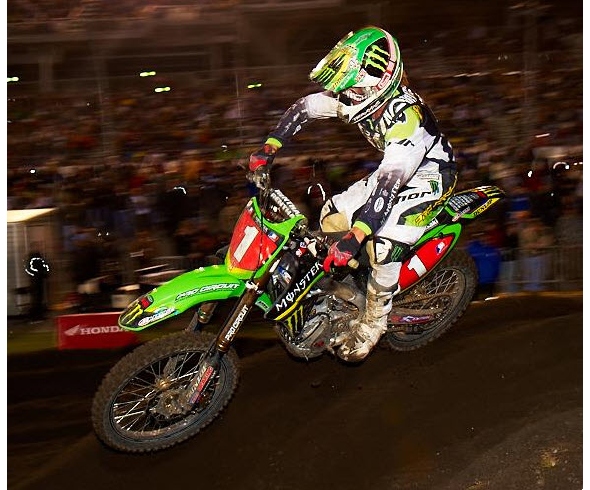 Daytona, FL: As AMA Supercross action came to the legendary Daytona International Speedway, 2009 champion Christophe Pourcel was again in top form and dominated the event by winning his heat race and the Main. Daytona marked the third victory in three races for the Monster Energy/Pro Circuit/Kawasaki/Traxxas rider, placing him firmly at the top of the points ladder. Teammate Dean Wilson also finished on the podium in third, his first visit to the steps as a professional rider since graduation from Team Green as 2009’s top amateur.

Dean Wilson rode in the first heat race and found himself mid-pack after the start, but worked his way up from tenth to fourth by the end of the moto. In the second heat race, Christophe Pourcel was edged out for the holeshot by Brett Metcalf but held a tight inside line to take over the lead just two turns later. Metcalf stayed within striking distance for another lap, but Pourcel kept his KX®250F on the gas and motored away to the win.

As the gate dropped on the Lites Main, Pourcel launched hard with a tight inside line to the first hairpin, but Austin Stroupe got the holeshot and took the lead as riders fought for position. Pourcel dueled briefly with Blake Bagget before moving into second behind Stroupe, with a full thirteen laps ahead for Pourcell to make his move. Meanwhile, Dean Wilson made the best of a strong start to slot into fourth. With characteristic patience and smoothness, Pourcel stayed close and looked for his opportunity to move into the lead. On lap six, Stroupe left the door open in turn two by taking a wide line. Pourcel countered by tucking his Kawasaki into the inside rut to instantly close the gap, then took over the lead through the next rhythm section. With four laps to go, the front runners hit lapped traffic and Dean Wilson made his move on Blake Bagget to take over third. Wilson held the position as the checkers flew, marking Pourcel’s third straight win. For the first time, the Monster Energy/Pro Circuit/Kawasaki/Traxxas teammates shared the podium.

The Speed cameras asked Pourcel what it would take to stop him, but as expected, he had no advice for his competition. “I don’t want anything to stop me, I would like to just win every race. But, we never know what’s going to happen, so I’m just going to try my best—you never know.”

Dean Wilson was happy to make his first pro podium, if not as quickly as he hoped. “It’s very exciting, I worked really hard to get here. I wish I could have gotten on the podium in the first two rounds but it’s all a learning experience for me. I’m really happy.”