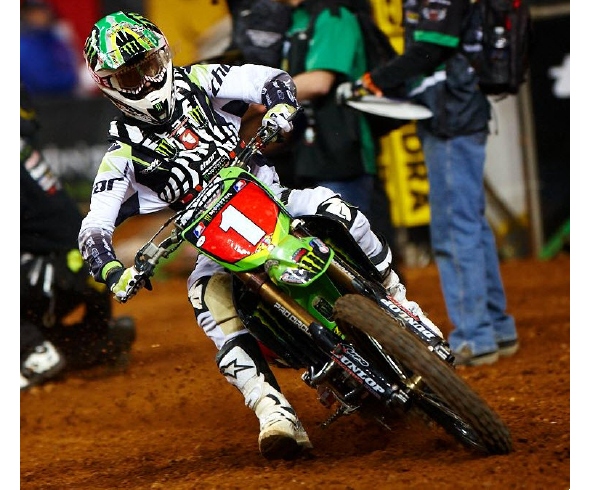 Atlanta,GA: The red number-1 plate of Monster Energy/Pro Circuit/Kawasaki/Traxxas rider Christophe Pourcel was once again out front as the defending Lites champion put the heat in hot-lanta with a hard-fought win in the Supercross 250 East series. Teammate Dean Wilson also made a fast showing at the Georgia Dome, with an impressive performance in the Main that saw the first-year Lites rider lead the first half of the race.

Wilson was the first Monster Energy/Pro Circuit/Kawasaki/Traxxas rider to hit the track, and began his heat race with the holeshot. Lites veteran Austin Stroupe moved into the lead as the race rolled into the first set of whoops, but Stroupe’s position was hardly secure as Wilson stayed within a bike length. The race changed instantly as the hard-charging Justin Barcia made an aggressive block pass that forced Wilson to lock up his front brake to avoid T-boning Barcia. Wilson dropped his KX®250F, but remounted and dove back into the battle, racing from sixth place. He passed two riders in the next two laps to move into fourth and finished in that position, easily making the 9-man cut for the Main.

In Heat 2, Christophe Pourcel crushed the field with commanding holeshot and an instant gap on the other riders. In typically effortless style, Pourcel maintained the gap and stayed out in front with clean goggles and an open track to take the heat-race win.

As the gate dropped on the Main, Christophe Pourcel took another holeshot, but teammate Dean Wilson chose found the faster line through the first turn and moved into the lead as Pourcel tangled with the other top-5 riders. Pourcel settled into fourth as the tightly-grouped field began to stretch out on lap one. Pourcel overtook Barcia with an aggressive pass and moved into third behind Heat-1 winner Austin Stroupe in the next corner. Pourcel overtook Stroupe on lap two as Speed cut to a replay of his previous pass on Barcia, putting both Monster Energy/Pro Circuit/Kawasaki/Traxxas riders up front just three laps into the race—but with 12 laps to go, there was still a full battle ahead. Pourcel gained steadily on Wilson, but also had to defend his position against Stroupe and Barcia as they attacked from third and fourth. Pourcel skirmished briefly with Stroupe on lap four but hung onto second. On lap six, both Stroupe and Barcia launched an all-out attack on Pourcel, each looking for their first win of the season. Stroupe managed to get around Pourcel in a rhythm section, tripling into a tight hairpin turn just ahead of Pourcel. In the next corner, Barcia made his move, briefly edging out Pourcel with an inside pass then just as quickly giving up the position as Pourcel countered in the next turn. On lap nine, Barcia again got around Pourcel, and Stroupe moved into the lead, overtaking Dean Wilson. With six laps to go, the pressure was on for the Monster Energy/Pro Circuit/Kawasaki/Traxxas riders. On lap ten, Barcia moved into second, putting Wilson back to third. Teammate Pourcel was the next to pass Wilson. Now in third, Pourcel demonstrated his reputation for patience and control as he looked for an opportunity. With just three laps to go, Pourcel made his move as race-leader Stroupe washed out in a turn, forcing second-place Barcia to go wide to avoid Stroupe’s fallen bike. Pourcel reacted instantly and tucked his Kawasaki into the turn beneath Stroupe, then pinned the throttle to blast into the lead—and three laps later, the win.

As Speed conducted the post-race interview, Pourcel was typically softspoken. “I had a bad crash this week and I couldn’t ride so I’m pretty happy to ride this weekend and I really gave my best. It’s crazy to win but I’m very happy tonight.” When asked about his rivalry with Barcia in the Main, Pourcel showed more fire—and big-brother-like support his teammate, Dean Wilson. “You know, that little kid [Barcia] wants to fight all the time,” said Pourcel. “I pushed him like he pushed my teammate. I’m number one, and I don’t want anybody to push me out. If you try to push me out, I’m going to do the same thing and try to win the race. I don’t really like to race like that, but it worked tonight.”