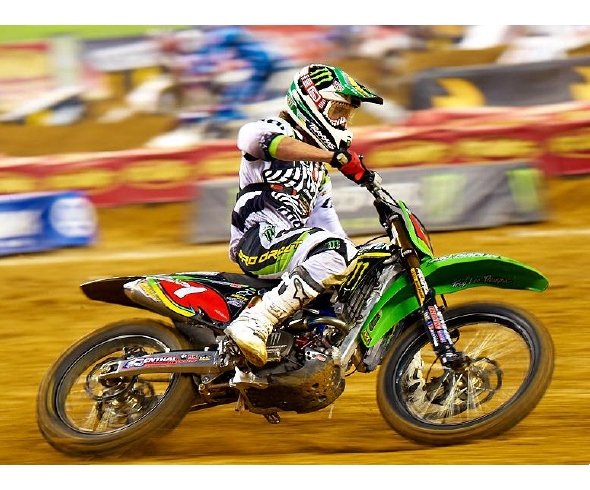 Latest race news from Traxxas:Arlington, TX: Monster Energy/Pro Circuit/Kawasaki/Traxxas rider Christophe Pourcel did not have the winning weekend he hoped for as AMA Supercross came to the new Cowboy Stadium for the first time, but he did maintain his lead in the points chase for the 250 East season despite what proved to be an unlucky night of racing.

The night started well for the Pourcel, as he won his heat race from green flag to checkers and posted the fastest qualifying time of the evening—the fifth straight week Pourcel has topped the qualifying time charts. In the Main Event, Pourcel was a front-runner as the bikes funneled into turn one, until Martin Davalos snagged a Tuff Block and tumbled off his bike, causing a chain reaction that wiped out nearly the entire field, including Pourcel. Precious time was lost as Pourcel extricated his KX®250F from the tangled mass of motocross hardware, and he could only watch the other riders stream past as he re-fired his machine’s stalled engine. All eyes were on the leaders as the race raged on, but the real show was at the back of the field as Pourcel fought a one-man battle to the front from an impossibly distant 20th place. The Main was all too short for Pourcel to have a shot at the win, but incredibly, he rode all the way back into seventh before the checkered flag came out. “I don’t know what happened, but pretty much everybody crashed in the first turn,” said Pourcel. “I tried to ride my way back up to the front, but it was difficult. I’m a little sore from my crash in Toronto and going down at the start didn’t help. It wasn’t a fun night.” What the race lacked in fun, it made up for in results: seventh place salvaged enough points for Pourcel to maintain a five-point lead in the standings with three races remaining.

Jacksonville, FL is the next stop on the Supercross circuit. Catch all the action on Speed, Sunday March 28, 6pm Eastern (3pm Pacific)

Based in Plano , Texas , Traxxas has been building the world’s fastest Ready-To-Race® radio controlled vehicles for over 23 years. Traxxas models are sold exclusively in Hobby Stores, 4-Wheel Parts, and Pep Boys.