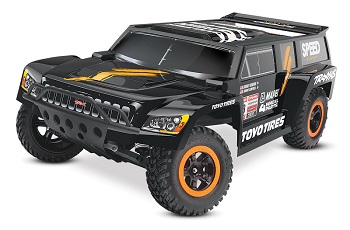 This new ride is RTR and comes equipped with a TQ 2.4GHz radio system, waterproof electronics, oil-filled Ultra Shocks, and an officially licensed body. Check out all the details in the press release below:

Robby Gordon is well known for his versatile driving skills that have earned him success in everything from NASCAR to short-course off-road racing. Robby got his start as a desert racer in 1986, and he remains a force in this unique brand of high-speed, high-endurance competition. Unmistakable in his tough black and vivid orange race trucks, Robby is a fan favorite and a top contender when the green flag drops on the famous Dakar Rally. And now you can drive Robby’s ride yourself with the Traxxas Robby Gordon Edition Dakar Slash!

Fully assembled and Ready-to-Race®, the Dakar Slash arrives complete with TQ 2.4GHz radio system, multi-terrain Slash tires mounted on race-replica SCT wheels, and the aggressive square-shouldered stance of Robby’s desert-conquering race truck. Authentic styling is matched with equally authentic performance. Exclusive waterproof electronics, long-travel suspension with oil-filled Ultra Shocks, and legendary Traxxas Tough durability let you drive where you want to drive─ even in mud, snow, and other wet conditions that send other trucks back to the garage. Fast an powerful out of the box with its Titan 550 motor, the Robby Gordon Edition Dakar Slash is ready for even more horsepower down the road with its Brushless Ready steel-gear transmission and Torque-Control™ slipper clutch.