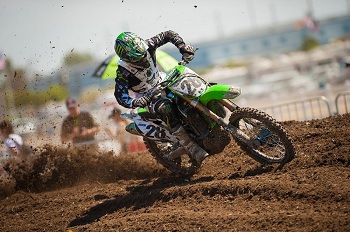 But Baggett’s wasn’t the only championship earned at Lake Elsinore by a Traxxas rider. Going into the weekend Traxxas’ WMX racer Ashley Fiolek trailed her rival Jessica Patterson by five points. That meant she had to finish in front of Patterson in both motos. When the gates dropped, Fiolek went to work and grabbed the hole-shot in each moto. She raced hard and ended up going 2-2 for the day. Fiolek’s speed and consistency, coupled with Patterson’s DNF in the second moto was all it took. Ashley Fiolek seized the 2012 WMX Motocross Championship, and will run the #1 plate again in 2013.

Baggett’s Traxxas/Pro Circuit/Kawasaki teammate Broc Tickle has had an impressive rookie 450 season and ended it on a high note by finishing 3-3 for third overall at Lake Elsinore. He completes his first 450 season fifth overall in the point standings.

Traxxas/Pro Circuit rider Tyla Rattray was slotted to run a KX250F this season but was sidelined early on with injuries. Once he’d healed up, Pro Circuit “loaned” Rattray to the Factory Monster Energy/Kawasaki team to replace the wounded Ryan Villopoto. Rattray, still riding in his Traxxas/Pro Circuit livery, adapted well to the 450 class and finished his abbreviated season 10th in points.

Congratulations to Ashley Fiolek and Blake Baggett on their championship-winning seasons. And a emphatic well done to Broc Tickle and Tyla Rattray on their successful 450 seasons.

Baggett and the rest of the Monster Energy/Pro Circuit/Kawasaki crew will now prepare for the upcoming 2012 Monster Energy FIM Motocross of Nations, which will be held September 29 and 30 in Lommel, Belgium. Baggett will be one of three riders representing the United States in this Olympic-like event.