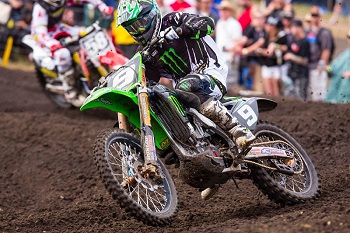 Traxxas’ Monster Energy/Pro Circuit/Kawasaki riders Blake Baggett, Ivan Tedesco, and Broc Tickle braved the windy conditions this past weekend at the third round of the Lucas Oil Pro Motocross Championship, held at the Toyota Thunder Valley National in Lakewood, Colo. Blake Baggett nearly took home the 250 overall win and still holds on to the 250 points lead, while Ivan Tedesco toughed out another weekend but still stays in the top-ten in 250 point standings. Broc Tickle hit a career milestone and earned his first outdoor podium finish in a moto in the 450 class.

Tickle was more motivated than ever to get a solid finish after a disappointing DNF in moto one at Thunder Valley. All his hard work finally came to fruition as he grabbed a third-place finish in moto two, his first podium-finish in the 450 class in the Lucas Oil Pro Motocross Championship. He finished 11th overall, despite the DNF, and is now ninth overall and 28 points out of the top-five in 450 point standings.

Baggett Holds On to 250 Points Lead and Coveted Red Plate

Baggett looked strong all day at Thunder Valley, but missed out on the 250 overall win by the skin of his teeth. A 3-1 finish gave him second overall, and he currently sits 16 points ahead of second-place in 250 point standings.

Tedesco continues to show his grit week after week. He is constantly pulling through tough conditions, but always keeps nose to the grindstone in order to stay in the mix. A 14-8 finish put him 11th overall on at Thunder Valley, and he is currently tenth overall in 250 point standings.

The Monster Energy/Pro Circuit/Kawasaki Race Team now makes its way to the fourth round of the 2012 Lucas Oil Pro Motocross Championship, which will be held this Saturday, June 9, at the High Point National in Mt. Morris, Pa. If you can’t make it to the track, catch all the first moto action LIVE on Fuel TV, then tune in later that day to NBC Sports to watch the second moto.