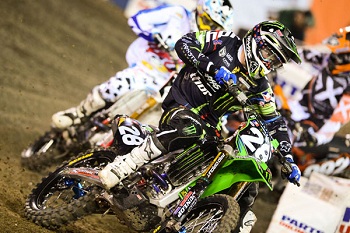 Traxxas’ Monster Energy/Pro Circuit/Kawasaki riders Tyla Rattray and Martin Davalos lined up for another exciting round of 2013 Monster Energy Supercross this past Saturday at Angel Stadium in Anaheim, Calif. Teammate Blake Baggett sat the night out in order to recover from an injury sustained at a previous round.

Tyla Rattray – Moving Up the Ranks

Rattray was quiet during the first two rounds of the series, but is finally starting to move up the ranks of the extremely stacked 250SX West class. His eighth-place finish propelled him from seventh overall to now being tied for fifth overall in 250SX West point standings.

After earMartin Davalos leads Ryan SipesMartin Davalos leads Ryan Sipesning his first podium finish of the season last Saturday in Phoenix, Davalos was confident he could keep the momentum going in Anaheim. He ripped a holeshot in his heat race, but was eventually relegated to the third-place spot by the time the checkered flag waved. After taking some time to figure out the flow of the tricky track, he lined up for the 250SX West Main Event with the hopes of repeating his podium success. Unfortunately, he was involved in an incident early in the race that plagued his plan for victory. After the incident, he remounted and fought through the pack to finish 12th. He is now focused on a return to the podium at this Saturday’s race in Oakland, Calif.

As always, Traxxas brought its exciting radio controlled stunt demonstrations to wow the fans in the pit party AND on the gnarly Anaheim track. The Traxxas E-Revo Brushless Edition was easily clearing the big double and was nearly able to land the triple! Fans got to interact with the pro RC drivers and the Traxxas Girls in the Pit Party. And two lucky fans won Traxxas Slash radio controlled short course truck to take home with them!

Up Next – Oakland Supercross

Traxxas and the Monster Energy/Pro Circuit/Kawasaki team will now make their way to round four of the 2013 Monster Energy Supercross series, which will be held this Saturday, January 26, at Overstock.com Coliseum in Oakland, Calif.