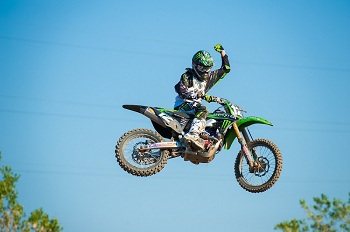 The 2012 Lucas Oil Pro Motocross Championship Series commenced this past weekend at the Hangtown Motocross Classic in Sacramento, Calif. The Monster Energy/Pro Circuit/Kawasaki camp experienced both the high of a dominating win and the low of losing a reigning champion and title contender to injury at the much anticipated season opener, proving that nothing can be expected in the grueling sport of motocross.

Pro Circuit rider Blake Baggett completely dominated the field and swept both 250 motos, giving him the first 250 overall win of the season! He leaves Hangtown with an eight-point lead in the 250 class point standings.

New teammate Ivan Tedesco made quite a showing at his first race back in the 250 class since winning the championship in 2005. The Pro Circuit alumni finished sixth in moto one, and fifth in moto two, giving him fourth overall by days end. He is currently 19 points out of the lead in the 250 class point standings.

Broc Tickle’s first outdoor season on the 450 is off to a good start. He earned sixth in moto one and seventh in moto two, giving him sixth overall on the day. He heads to the next round seventh overall in the 450 class point standings.

Reigning Lucas Oil 250 Pro Motocross Champion Dean Wilson had high hopes for Hangtown, despite an existing shoulder injury, and was looking forward to riding with the red number one plate in the season opener. He was determined to block out any pain as he lined up for the first 250 moto, but it was evident mid-race that his shoulder was more of an issue than originally thought, and he was unable to finish the race as a result. His physician is currently reevaluating his injury, and the team expects to make another announcement soon.

Baggett, Tedesco, and Tickle now make their way to round two of the Lucas Oil Pro Motocross Championship, which will be held at the Freestone National in Wortham, Texas this Saturday, May 26. Baggett and Tedesco are first and fourth overall, respectively, in the 250 class, while Tickle is seventh overall in the 450 class.