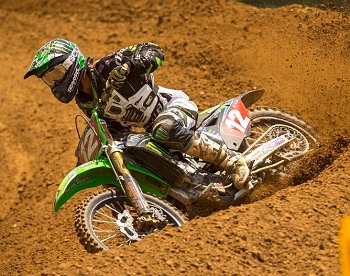 Round two of the Lucas Oil Pro Motocross Championship was held this past weekend at the Freestone National in Wortham, Texas. Traxxas’ Monster Energy/Pro Circuit/Kawasaki rider Blake Baggett aired it out and held on to the 250 class points lead. Teammates Ivan Tedesco and Broc Tickle had a rough go in Texas, but stayed tough and are still looking strong as the series closes the books on round two.

Coming off a 1-1 sweep in the 250 class at the first round of the series at Hangtown, Baggett was looking for a repeat performance at Freestone. Bad starts stood in the way of a win, but he charged from behind and finished 2-2, giving him second overall on the day. He stretches his 250 class points lead by 14 points, and will ride with the red plate for the second week in a row at this Saturday’s race in Colorado.

Tedesco had his work cut out for him in Texas. An 11th place finish in moto one had him motivated to redeem himself in moto two, but a first-turn crash proved to plague his plans for domination. He finished 19th overall, and is now ninth overall in the 250 class point standings.

Tickle started the day strong with a seventh-place finish in moto one in the 450 class. Bad luck hindered his success in moto two, and he was unable to finish the race as a result. He finished 14th overall despite the DNF, and is now eighth overall in the 450 class point standings.

The Monster Energy/Pro Circuit/Kawasaki/Traxxas team now focuses on round three of the Lucas Oil Pro Motocross Championship, which will be held at the Toyota Thunder Valley National in Lakewood, Colorado, this Saturday, June 2.