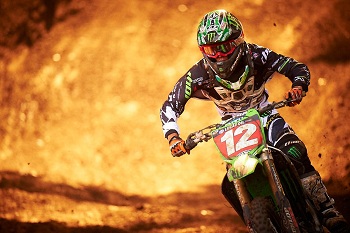 Traxxas’ Monster Energy/Pro Circuit/Kawasaki riders Blake Baggett, Broc Tickle, and Ivan Tedesco were ready for battle as the 2012 Lucas Oil Pro Motocross Championship traveled to the Washougal National in Washougal, Wash. Baggett earned third overall and held on to the points lead in the 250 class, Tickle continued to plug away in the 450 class by earning fifth overall and holding on to fifth overall in 450 point standings, and Tedesco sustained an injury during the 250 class practice that would put a damper on his hopes for Washougal.

The Keeper of the Red Plate

Although Baggett finished sixth in moto one after pushing through crashes, he bounced back in moto two and put on his signature charge to take another exciting moto win. The 6-1 finish gave him third overall, and he continues on as the points leader in the 250 class.

Tickle has been staying consistent in the 450 class, and has been steadily plugging away at each round. His goal for Washougal was to earn a strong finish and keep it in the mix in the 450 point standings before the series went on a two-week break. This was accomplished with a 6-4 finish, which gave him fifth overall at Washougal and kept him at fifth overall in 450 point standings.

The Washougal National was Tedesco’s first race back after being sidelined the past several weeks due to injury. Unfortunately, a knee injury sustained in practice at Washougal would set him back a few paces during the first 250 moto. He gutted it out and finished the moto, but was unable to line up for the second moto due to the injury. The extent of the injury is not known at this time, but an announcement will be made when more information is known.

Traxxas’ Pro Circuit/Kawasaki riders will get a two-week break before hitting the track again on August 11 at the ninth of 12 rounds, which will be held at the Moto-X 338 National in Southwick, Mass.