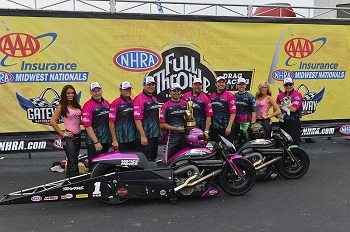 Traxxas is proud to announce its partnership with the Vance and Hines Screaming Eagle Harley Davidson riders Eddie Krawiec and Andrew Hines. Traxxas struck a deal earlier this year (2012) and the continued success of both V-Twin riders has made it a great partnership!

The 2012 season has been a dream season for both Hines and Krawiec. Hines, son of motorcycle engine builder and competitor Byron Hines, has continued the Pro Stock Motorcycle domination his brother started over a decade ago. Brother Matt, three-time Full Throttle Drag Racing Champion, now holds the title as the primary Crew Chief and tuner on both riders’ bikes. Andrew has complied an impressive resume in his short 10-year career, notching 30 wins in 53 final round appearances. Andrew has now matched his brother’s accomplishments with three consecutive Full Throttle Championships of his own, spanning 2004 to 2006. Now, fast forward to 2012: Andrew has won 6 of the 15 races in the 2012 season (a career best), yet he trails teammate Eddie Krawiec by 111 points going into the final race of the season.

Eddie Krawiec is no stranger to Pro Stock Motorcycle success, but his recent accomplishments have accelerated his career into the record books. Eddie earned his first Full Throttle Drag Racing Championship in 2008, and became the second professional driver to accomplish this without winning a race. After grabbing his first win in 2009, Eddie has picked up a total of 20 wins, 9 of which have come in the 2012 season! As the defending 2011 Pro Stock Motorcycle Champion, Eddie now has a commanding lead of the Pro Stock Motorcycle points heading into the Auto Club Finals, and appears to be comfortably on his way to becoming a back-to-back NHRA Full Throttle Champion.

Traxxas, The Fastest Name in Radio Control, is a producer of Hobby-Grade Radio Controlled vehicles. As a primary sponsor of the NHRA Full Throttle Drag Racing Series, Traxxas is well represented at each and every NHRA event. Traxxas offers fun for all ages allowing fans take control of a vehicle on their dirt Try-Me track. Traxxas brings two 18-wheeler semi-trucks with their entire line of vehicles (available for purchase) to every event. It is literally impossible to miss Traxxas in Nitro Alley; their Pro-Level drivers launch vehicles into the air, blasting off huge tricks, sticking the landing, and driving away, much to the surprise of the eager NHRA crowd! For more information, you can check out Traxxas.com, or swing over to their page on Facebook and/or Twitter.