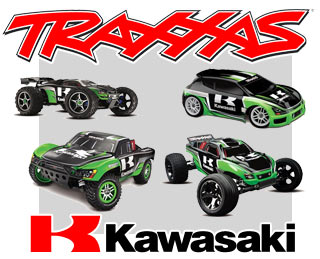 If you follow Supercross, you’re probably well aware of Traxxas’ involvement as a sponsor in that dirt bike racing series. But, if you haven’t been in a Kawasaki dealership you may not be aware of the lineup of Traxxas vehicles sporting the famous Kawasaki motif. We were even surprised; for some reason we believed that the big K was only to be found on the 2WD Slash. It turns out if you’re a big Team Green fan you can have your choice of a 2WD Slash, the Slash 4X4, Rustler, Rally and E-Revo. We even spotted a Summit in Kawasaki colors. These vehicles are all listed as limited editions, so if you want to check out what’s available, head on over to your nearest Kawasaki dealer.