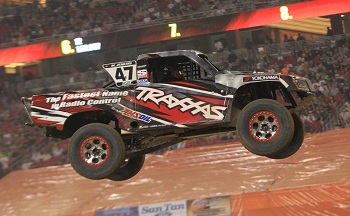 The Inaugural Stadium SUPER Trucks races ran at University of Phoenix Stadium in Glendale, Arizona. Four distinct divisions were tested on the high flying course stadium course. Rob MacCachren was able to overcome all challenges and mark his name in the record book as the first ever winner in Robby Gordon OFF-ROAD competition. MacCachren, of Las Vegas, Nevada, driving the #21 Traxxas truck held off a duo of SPEED Energy driver’s en route to taking home the first checkered flag in Stadium SUPER Trucks history.

The 18-lap Stadium SUPER Trucks final was led to green by Justin Matney of Bristol, Va. who jumped out to the early lead before being over taken by Mexican off-road standout Lalo Laguna. Racing out to a 3 truck lead ahead of Matney on Lap 2, Laguna lost the handle on his #17 Vist Mexico entry allowing it to make contact and get stuck on the outside water barrier. However, the man on the move was the #21 of MacCachren rocketing from the sixth position to third in just one lap.

Quick Qualifier Justin Lofton, of Brawley, Calif., found trouble with Traxxas president Mike Jenkins in the #47 Traxxas truck coming off the second double resulting in Lofton rolling over on his side. On the restart, MacCachren set his sights on leader Matney, and was able power his way past to take the lead on Lap 4.

Lofton, found trouble once again on Lap 10, as a fire erupted underneath the hood of the #6 Imperial Valley Full Plate truck. On the restart, MacCachren blasted off to a four truck lead ahead of Matney and Phoenix, Ariz. native P.J. Jones. The final laps became a shootout for second as no one could catch MacCachren. Jones gave everything he had to get past Matney in the final corners, resulting in him losing control of his truck and flipping over.

MacCachren, raced the #21 Traxxas truck to victory in convincing fashion ahead of Mattney and Orange, Calif. native Robby Gordon.