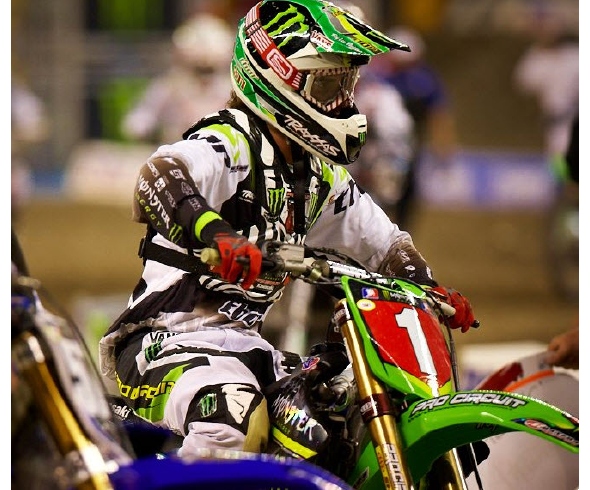 Latest race news from Traxxas:Toronto, Ontario Canada: Monster Energy/Pro Circuit/Kawasaki/Traxxas rider Christophe Pourcel grabbed his fourth straight podium in the AMA Supercross 250 East series, finishing third. Although not the win Pourcel hoped for and many expected, especially after winning the first three races of the 250 East series, the third-place finish was still enough to keep Pourcel on top of the points chase. Traxxas-sponsored teammate Dean Wilson finished just off the podium in fourth, and boosted himself to third overall in points.

Fueled by the excitement of racing in front of a hometown crowd, Dean Wilson clobbered the other riders in the first Lites heat race with a commanding holeshot and a lead of nearly five seconds on his way to the checkered flag. Christophe Pourcel raced the second heat with rivals Justin Barcia and Austin Stroupe. Pourcel slotted into third behind Stroupe after Barcia got the holeshot, and in typical Pourcel fashion, quickly moved to the front. The sandy corners that were a liability for many riders were an opportunity for Pourcel, as he picked off Stroupe in the loose stuff. With his sites on Barcia, Pourcel maintained his momentum through a rhythm section as Barcia faltered, and Pourcel took over the lead just two laps into the race. But as if to prove anything can happen in Supercross, Pourcel had rhythm section troubles of his own when a mis-timed jump violently bucked him off his bike. Pourcel bravely re-mounted and finished seventh, earning a spot in the Main but losing prime position on the gate.

As the gate dropped on the 250 Main, Christophe Pourcel rode aggressively to secure fourth place behind teammate Dean Wilson despite a less-than-advantageous gate position. With precise timing and a blast of torque from his Pro Circuit-prepped Kawasaki, Pourcel tripled into third place as Wilson double-singled. Now in striking distance of leaders Austin Stroupe and Justin Barcia, it looked like a fourth win for Pourcel was within reach. But on lap six, bad luck struck as a Tuff Block cover got caught on Pourcel’s bike. Rather than risk the cover wrapping the bike’s sprockets and stalling the engine, Pourcel slowed to remove the cover. Although he did not lose a position, the slowdown put the leaders out of reach. Pourcel finished third to earn his fourth consecutive podium finish and maintain his overall 250 East points lead. Teammate Dean Wilson held off Ryan Sipes to earn fourth, and enough points to put him in third overall for the points series.

The next stop on the 250 East circuit is Cowboy Stadium in Arlington, Texas. It’s going to be intense! See the action on Speed, March 21, 5pm Eastern (2pm Pacific).