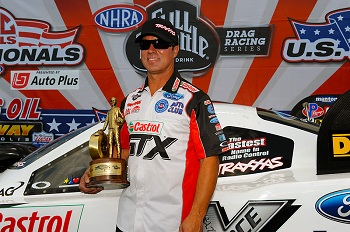 For the fifth straight year and eighth time in eleven years John Force Racing reigned supreme in Funny Cars at the NHRA Mac Tools US Nationals. Mike Neff tuned and drove his Castrol GTX Ford Mustang to the win for the second year in a row defeating fellow Ford Racing driver Tim Wilkerson, 4.079 to 4.152 in the final. This was the fourth consecutive win for the Castrol GTX Ford Mustang (Ashley Force Hood 2009-10, Neff, 2011-12) to get the win at the biggest race of the season.

There was a feeling of de ja vu for Neff coming into race day. Last year the Castrol GTX tuner and driver was not filled with confidence heading into the first round. He had the same feeling today he recounted to the media.

“We qualified 10th this year but I felt like we were pretty close. It is amazing how close everything today was to last year. I didn’t do very good job in qualifying last year,” said Neff, the No. 9 qualifier in 2011. “I remember getting up last year and just not feeling very good. I remember thinking I am going to have to really pull something out of the hat last year. I had the same feeling this morning. I felt like we were close.”

“I was low first round and I got a single second round which is rare. You don’t see that very often. We were quick every run. As the day went on I started feeling better. I felt like it was either going to be your day or it wasn’t. I was nervous the first round with all the cars smoking the tires in the left lane. I didn’t have lane choice. Then (Todd) Lesenko blew his body off and there was all that drama. There was a lot going on and I watched Force smoke the tires and then (Ron) Capps. It was just really stressful. Once that was over and I knew I was getting a single it just got better.”

This was the fourth straight all Ford Racing final at the most prestigious NHRA event. Wilkerson raced into the Countdown on the last day and Neff moved up from fifth to fourth in the Full Throttle point standings. John Force Racing will go into the Countdown to the Championship as the No. 2 (Robert Hight), No. 4 (Neff), No. 6 (Courtney Force) and No. 8 (John Force) teams.

Neff was locked into the Countdown but there were drivers behind him in the standings that were living and dying figuratively with every round. For the former crew chief turned driver he was mildly aware of the drama but when it had sorted itself out his encounter with fellow Funny Car driver Jeff Arend surprised and amused him.

“I am glad I wasn’t fight for one of those last spots in the Countdown. I didn’t know what was at stake. I knew (Bob) Tasca (III), (Matt) Hagan and (Tim) Wilkerson were all right there. After the semis when I beat Matt Hagan Jeff Arend came over and actually came up in my lounge and gave me a kiss on the cheek. He said thank you and I asked for what. He said he was in the Countdown because he needed one of those guys to lose. There was just too much going on,” said Neff.

Neff had the quickest Funny Car every elimination round: 4.085, 4.081, 4.131 and 4.079 seconds. In the final versus Wilkerson Neff wasn’t sure he got the win and had a few agonizing minutes in the cockpit of the Castrol GTX Ford Mustang.

“Tim Wilkerson left on me and I saw him out in front of me. He poked his nose out there maybe about 300 feet. It is hard to say exactly where it was. I caught a glimpse of him and if you can see someone in a Funny Car they are out there. I am not looking out the side window. I could see his car mixing up cylinders and I saw fire and stuff so I could see it was eating itself up. I am talking all that took place in about a second. I start going back the other way and I am moving ahead,” said Neff.

“I could see the finish line coming and I could not have pushed on the gas any harder. I was like ‘Come on!’ I didn’t even know who won. I was on the radio asking and I didn’t hear anything so I thought that wasn’t good. I was getting pushed off thinking “Crap! I must have gotten beat.’ As they are pushing me off the guy at the very end every round I won that guy would clap and point me off the track,” explained Neff.

“I thought maybe that is a good sign because he is clapping but I thought he might be doing that for everyone. I knew when they push you to the camera that is the good sign. I knew it was so close and I didn’t know if I got there first. There was a lot of emotion going on there.”

Courtney Force made it to the quarter-finals today and held onto the No. 6 spot in the point standings when she won the opening round of her first ever Mac Tools U.S. Nationals at Lucas Oil Raceway Park behind the wheel of a Funny Car.

Force qualified No. 1 for the extended version of the biggest race of the year after a rainout last weekend. Force’s 4.049 ET, her career-best, held throughout five rounds of qualifying along with her new track speed record of 317.27 mph.

“Going in we had a great car. Being No. 1 qualifier was such a huge accomplishment for out Traxxas Ford Mustang team so I’m very proud of my guys. My team gave me an amazing race car all weekend long. I really couldn’t be happier,” said Force.

Force and her Traxxas Ford Mustang ran a 4.108 ET in the first round of eliminations and ousted Jon Capps from the show.

“We got the first round win which was huge. We clinched into the Countdown to the Championship. It really was a huge weekend for us. Our fellow Ford driver, Tim Wilkerson, clinched as well as my dad and my teammates. Overall, it was a good weekend,” said Force.

The leading candidate in Auto Club’s Road to the Future award for top “Rookie of the Year” lost in the second round to Johnny Gray’s 4.128 ET when her Traxxas Ford Mustang went out of the groove on the race track causing it to smoke the tires.

“We went out in the second round which was definitely a bummer. It kinda drove over to the centerline and it spun the tires. So, it’s unfortunate, but you know what, on the brighter side of things we had a good car and we are capable of going out there next weekend and making it to the final round. So we’re just going to have to do it in Charlotte. That’s when we got a second shot at it so I’m really excited,” said Force.

Because of the postponing of the Mac Tools U.S. Nationals, Force has only a few days before racing resumes at the self-proclaimed Bellagio of Drag Strips, zMAX Dragway next weekend, the official start of the Countdown to the Championship.

“Now it’s down to business. We clinched the No. 6 spot in the Countdown and it’s exciting that that won’t change and in Charlotte we’ll start from there,” said Force.

After seeing Ron Capps lose in the opening round to his DSR teammate Matt Hagan Robert Hight was hoping to reel in the points leader and pick up his third Mac Tools US Nationals win. He got off to a strong start when he bested two-time Funny Car champion Cruz Pedregon in round won. Hight drove his Auto Club Ford Mustang around a red-lighting Pedregon posting a winning time of 4.118 seconds at 310.13 mph.

After the win Hight was excited about the prospect of regaining the Full Throttle points lead. He knew he would have to be at the top of his game against a tough competitor in Pedregon.

“You think of so many things. I knew he went red and that is not like Cruz Pedregon. He is one of the best out here. In fact he is the guy that will make you go red because he will push you. You see that and I knew it had happened so I was like keep this baby in the groove,” said Hight. “If it did anything stupid I was not going to pedal it. I didn’t want to go over the center line. This Auto Club Ford is still moving. We got a break last week and the breaks keep coming. We are going try and take advantage of them. We came to Indy to try and get the No. 1 spot. You want to win the Mac Tools US Nationals and however the points shake out then that is the way it goes.”

In the second round Hight had a chance to stop Matt Hagan’s dream of reaching the Countdown but his Auto Club Ford Mustang was edged out by the 2011 Funny Car champion 4.127 to 4.137 seconds.

“We came up short, but the good news for my team is when we came back here after the rainout, that’s four runs in a row we’ve made it down the track. It’s been awhile since we’ve done that. And there’s room for improvement,” said Hight.

“We got put in the left lane second round and it wasn’t as good. I believe Jimmy made a good call. If we’d have tried harder, it would have smoked the tires. He made the best call he could make having to run that lane.”

“I’m excited about going to Charlotte and it’s this week. We get to move right on to the nest one and get this Countdown started. I’m excited.”

On the race track John Force clinched his spot in the 2012 Countdown to the championship with his No. 8 qualifying effort. This will be the 28th season in a row that the 15-time Funny Car champion is guaranteed of finishing in the Top Ten.

In the opening round an aggressive tune up against Johnny Gray doomed the four-time Mac Tools US Nationals winner. His Castrol GTX HIGH MILEAGE Ford Mustang struck the tires at the hit of the throttle.

“The Countdown starts in Charlotte in the heart of NASCAR country. I am excited for Neff, Robert and Courtney but most of all this ole hot rod of mine is about to start running. For all my sponsors Castrol, Mac Tools, Ford, Auto Club, BrandSource, Traxxas and Freightliner getting all four Ford Mustangs in the Countdown was huge,” said Force.

“I had a tough first round but better now than in the Countdown. (Crew chiefs) Dean “Guido” Antonelli and Danny DeGennaro will get with Neff, Jimmy Prock and Ron Douglas and we’ll get a strategy for the Countdown. We are 2-4-6-8 and you have Wilkerson in and you can never count out Bob Tasca III. That is six Fords that can win any race. It will be exciting and I can’t wait to get to Bruton’s race track.”