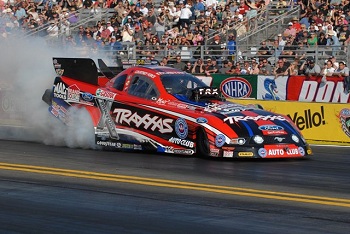 Courtney Force, driver of the Traxxas Funny Car is RACER magazine’s runaway choice as Rookie of the Year, voted on by their global readership.

The 24-year-old from Yorba Linda, Calif., a former national event champion in Alcohol Dragster, reached four Funny Car finals in her 2012 rookie season. In July she defeated reigning Funny Car Champion Matt Hagan in the Seattle final for one of the most well-received victories by any driver in any drag racing class all season. A runner-up finish to Cruz Pedregon in the Pomona finals showed she’ll be a Funny Car title contender in 2013 – and victory in the season-opening Winternationals confirmed it.

“I want to thank the readers of RACER Magazine for voting for me as RACER Rookie of the Year. To be considered with top NASCAR, Indy Car and F1 rookies is an honor just in itself and to be voted as Rookie of the Year is unbelievable,” said Force, the 2012 Automobile Club Road to the Future Award winner. “I have to thank all my fans and especially RACER magazine for this honor. I also want to thank my dad, John Force, Ford and my sponsor, Traxxas for being so supportive last season.”

RACER editor David Malsher commented, “If Courtney Force thought she had a tough battle on her hands in NHRA Funny Car last year, she had an even tougher battle in the RACER Rookie of the Year award. Or so you’d think, considering she was up against Simon Pagenaud in IndyCar and Daniel Ricciardo in Formula 1. But actually, Courtney wiped the floor with all of them, earning over 60 percent of the readers’ votes, and became the first NHRA driver ever to win this award. Scoring a win and sixth place in the championship standings in your first year of wrestling an 8,000hp, 300mph car is a heck of an achievement, and RACER readers clearly understand that.”

We at Traxxas are proud to partner with Courtney Force and the entire John Force Racing team. We see a great future for the rising star.