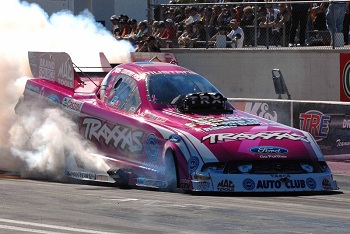 The Traxxas Mustang Funny Car crew led by crew chief Ron Douglas and assistant crew chief Dan Hood has been nominated as one of four finalists for the 2012 NHRA Full Throttle Hard Working Crew Award in the Funny Car category.

“My guys have been so great during my rookie season. I am a rookie driver but this is also the first year these crew guys have all worked together on this Traxxas Ford Mustang Funny Car. We have a couple No.1s, three finals and the big win in Seattle which is the event where we won the Full Throttle Hard Working Crew Award,” said Courtney Force.

“I am so proud to be nominated as one of the finalists. There are so many great crews out here to have my crew recognized is really awesome. I hope everyone goes to nhra.com and votes for my Traxxas guys. They deserve it.”

The Traxxas Mustang team earned hard-working crew honors for its work in directing Force to victory at the NHRA Northwest Nationals. It was only her 15th professional race. Force defeated drivers who have won a combined 18 NHRA Full Throttle championships on the way to victory. She had to defeat Cruz Pedregon, Bob Tasca III, John Force and 2011 Funny Car champion Matt Hagan in the final.

The win was even more impressive when you consider that Force started from the No. 14 qualifier spot, ironically her worst starting spot of the 2012 season. The NHRA Full Throttle Hardworking Crew Award of the Year will be determined by fan vote via NHRA.com.

Online voting will begin the Monday after the NHRA Las Vegas Nationals and conclude the Monday after the Automobile Club of Southern California NHRA Finals. NHRA Full Throttle Hardworking Crew Award of the Year winners will be honored in each of the four classes at the season-ending awards ceremony. Fans can visit http://www.nhra.com/hardworkingcrew/ to cast their vote for Force’s team as well as the nominees in the Top Fuel, Pro Stock and Pro Stock Motorcycle categories.

Courtney’s sister Ashley Force Hood is producing a viral video encouraging her fans to vote for her Traxxas Mustang team.