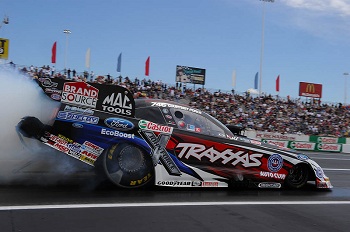 Raceway Park in Englishtown New Jersey hosted the ninth race of the NHRA Full Throttle Drag Racing series this past weekend. The Toyota Supernationals is known as one of the original events on the NHRA circuit and it is the only stop in the Northeast portion of the United States. A huge crowd was on hand each day of full throttle racing, and they certainty didn’t leave disappointed!

In the first qualifying session, the air was good and the drivers took full advantage of it. John Force woke up the crowd in Englishtown when he blew up around the 900’ mark, still managing a 4.223 at 256.60 mph. Robert Hight ran a 4.077 and Mike Neff ran a 4.05, both having an identical mph of 312.71. Courtney Force was the only Traxxas John Force Racing driver that didn’t make a successful pass down the track. Her Traxxas Funny Car went up in smoke around the 200’ mark. Courtney did manage to gain some experience pedaling a fuel car and salvaged a 6.177.

The second session of Nitro began just as the sun was setting. The air was terrific and the cool temperatures gave the teams’ monster conditions to race in. Courtney Force again smoked the tires, this time at the 330’ marker. Courtney ran a 5.300, a decent time considering she had to backpedal the car again this pass. John Force light up the sky running a 4.066 at 311.85. Robert Hight raised the bar running a 4.013, the quickest of the Traxxas John Force Racing Drivers that session. When the final pair of Funny Cars came to the line, it was apparent that both Mike Neff and Rahn Tobler (crew chief for Ron Capps) had their cars set on kill in hopes of setting a Funny Car record, and every crew chief from almost every team was on the line. The teams couldn’t ask for better conditions. The drivers left the line and everyone could feel that something great would happen. Mike Neff smoked the tires almost instantly, but his 60’ showed that his car was set to run a low 3.90. Ron Capps stayed glued to the surface and ran the quickest 1000’ Funny Car pass ever, a 3.964.The crowd erupted and proved to be a great way to end the second session of Funny Car.

A great crowd arrived at the track early for Saturday’s qualifying sessions. The track conditions weren’t as good as they were in the previous night session, but the cloudy, mild temperatures wouldn’t be enough to hold back the Traxxas John Force Racing teams! Courtney Force kicked off racing with a 4.130 at 301.40 mph. She was the only remaining Traxxas driver that had not made a pass quick enough to qualify her into the race, so Courtney was able to breathe a sigh of relief after that run. Mike Neff ran the quickest time of the JFR team lighting up the score boards with a 4.110 at 308.85 mph. John Force followed suit and ran a 4.155 at 303.09 mph. Robert Hight had issues just before the finish line, but still managed a 4.302.

For the final qualifying session, Mother Nature gave the teams and fans some great weather conditions to race in for the second time this weekend, and the Traxxas John Force Racing drivers took full advantage of it! Courtney was able to improve her qualifying position by running a 4.098 at 310.27 mph. John made his pass and his 4.090 at 310.05 mph was fast for the current weather conditions, but was not enough to improve his initial qualifying position. Crew chief and driver Mike Neff tuned his Funny Car to run a 4.074 at 311.85, a quick pass all things considered. Robert Hight was in the last pair of Nitro cars to make a run down the track on Saturday, and he did it in style. His 4.066 at 312.93 mph was one of the quickest of the day and would carry positive momentum into Sunday’s race.

Going into race day on Sunday, the John Force Racing drivers had to be feeling confident. All four cars made a sub 4.100 pass in the last qualifying session. Robert Hight was the highest qualified team driver in 2nd, Mike Neff was 7th, John Force 11th, and Courtney Force in 13th. Courtney faced Tim Wilkerson in round one. Tim elected to be the first pair of Funny Cars down the track and chose the left lane. When the cars left the line Tim didn’t have much for Courtney when he went up in smoke early in the run. The Traxxas Funny Car lit up the scoreboard with a 4.111 to taking home the first round win. Robert Hight was the next Traxxas John Force driver to take a trip down the drag strip. His opponent was Blake Alexander. Both drivers made a great pass but it would be Robert Hight who would advance after running a 4.094 against Blake’s 4.172. John Force was next and had to do battle against Alexis DeJoria. John ran a 4.142 against Alexis’ 4.318 taking home the win. Mike Neff would round out round one for the JFR drivers. He had the task of taking down hometown favorite Bob Tasca. Bob had problems almost instantly handing over the win to Mike who ran a powerful 4.108. With round one complete half of the remaining field in Funny Car was John Force Racing drivers!

Unfortunately for Traxxas and John Force Racing, Robert Hight and Mike Neff were forced to race each other in the second round of competition. It was a great side-by-side race, which ended with Robert Hight taking the win on a holeshot. Robert ran a 4.107 and Mike a 4.083. Robert had a huge advantage off the line with a .089 reaction time compared to Mike’s .209. John Force had a great race against Johnny Gray. Gray took the win at the stripe with a 4.090, but by only five thousandths of a second. John ran a 4.162 but had five hundredths advantage off the line, which almost made up for the difference in E.T. Courtney Force was the last of the Traxxas John Force drivers to head to the line. She lined up against the 2011 NHRA Funny Car Champion, Matt Hagan. Courtney ran a 4.123 next to Matt’s 4.172, a great first time match up for both drivers. Courtney and Robert would head to the semi-final round with hopes of taking Traxxas and John Force Racing back to the winner’s circle!

Storms moved into the area just as the drivers were pulling into the staging lanes. This cooled the air and the track down substantially. Courtney Force was set to race Ron Capps, the newly crowned quickest 1000’ Funny Car driver. Courtney made Capps work for it, but he did manage to take the win. He ran a 4.079 to Courtney’s 4.110. It was another great pass by Courtney and was sure to help build her confidence knowing her Traxxas Funny Car can get down the track fast in any condition. Robert Hight had the full weight of Traxxas and John Force Racing on his shoulders during his pass against Johnny Gray. Robert ran a 4.084 against Johnny’s 4.091, but Johnny took the win on yet another holeshot victory. Johnny’s .085 reaction time just barely offset the difference in E.T. since Robert’s reaction time was a .095. The heartbreaking loss put an end to the Traxxas John Force Racing hopes of victory in New Jersey.

As usual, Traxxas was on-site with their full line of RC cars, support staff, and mobile hobby store. Fans got to drive a Traxxas Slash, a Traxxas 1/16 Rally car, and watch our professional RC drivers demonstrate the agility, power, and strength of Traxxas vehicles! As the NHRA and Traxxas head to Bristol Tennessee for race number 10, stay current on Traxxas.com, Facebook.com/TraxxasRacing, and the Traxxas Racing Twitter page.