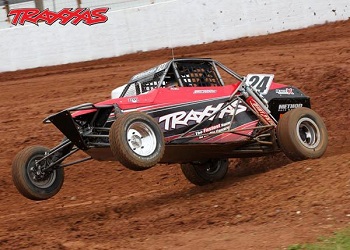 The 2012 Traxxas TORC Series kicked off last weekend on The Dirt Track at Charlotte Motor Speedway. Fans were treated to two nights of fender-crunching, dirt-flinging action as short-course off road racing trucks air it out in Concord, NC. TORC Series dirt masters turned a 4/10th mile oval into a challenging off-road racetrack loaded with moguls, rhythm-sections, and huge tabletop jumps. And TORC fans around the country got to see all of Friday’s action aired live on Speed Channel!

On Friday night in Super Buggy it was Traxxas’ Mitchell DeJong’s race to lose after qualifying 2 seconds faster than any other buggy driver! Not bad for 15 year-old DeJong’s TORC debut. To keep things interesting, the top four qualifiers were inverted for the start of the race, meaning that DeJong started from the number four spot. But that didn’t stop Mitchell from charging to the front and taking the lead within a few laps. He held onto his lead after the competition yellow and took home the win for Traxxas!

PRO 2 had all the makings of a Bryce Menzies dominated performance. But pressure from Traxxas driver Jeff Kincaid would help keep Menzies from the top podium spot. Menzies lead the most of the race and was well on his way to kicking off the year with a victory. That was until he looped his truck coming into the infield portion of the course with just two laps to go. CJ Greaves, in his first PRO 2 race, was in the right place at the right time. CJ blew by the backwards Menzies truck and took the lead with only a lap to go, while Kincaid slotted neatly into second. Menzies was dropped all the way to fifth, but charged hard back to the third place position. When the checkered flag dropped, it was CJ Greaves in the lead followed by Traxxas’ Jeff Kincaid and Bryce Menzies.

The PRO 4 race was a hard-charging door-to-door brawl. Traxxas’ President Mike Jenkins had a tough qualifying session and started near the back of the field. But smooth driving and consistent lap times allowed him to work his way up throughout the race. The PRO 4 racing was tight! Throughout most of the race you could have thrown a blanket over the leaders. Ricky Johnson and Amsoil’s Scott Douglas fought it out for first while Jenkins dogged them, ready to pounce on any misstep. The mistake never came, and that’s how they would finish. The BF Goodrich-shod trucks swept the podium, with Ricky Johnson, Scott Douglas, and Mike Jenkins flying over the finish line in that order.

Round 2 of the Traxxas TORC Series resumed the next day. Mitchell DeJong again had the fastest Super Buggy. He had his Traxxas buggy on point after making his way yet again through the field. After the competition yellow his buggy slowed and came to a stop. He lost an alternator belt at some point and was done for the night. This opened the door for Steve Krieman and John Frana to race for the win. John Frana had a sizeable lead, but on the last lap, he blew a tire. Krieman saw the tire issue and immediately went for the kill. He made the pass and took the win with only a few corners to go in an exciting Super Buggy finish!

Between the Super Buggy and the PRO Lite races was an event that is absolutely unique to TORC, the Traxxas Pro Driver RC Challenge. Race fans got to see their favorite TORC drivers take TQi Controller in hand and battle each other on a slightly smaller scale. Fifteen TORC drivers raced each other with 1/10th scale Traxxas Slash 2wd replicas of their full size trucks. TORC devotees crowded around the RC track as the drivers fought tooth and nail for the victory. No matter that the racers weren’t in their 900 horsepower short-course machines, they each wanted that win! In the end Traxxas’ President Mike Jenkins was barely nipped by brother Mark Jenkins at the finish as Charlotte fans cheered.

Meanwhile, the stage was set for yet another exciting PRO Lite race from the green flag to checkered. Almost the entire field was running door-to-door for the first handful of laps. Andrew Caddell was on a run to the front when his truck got tangled up with a few others. He managed to get out unscathed, however he lost a large chunk of track position and dropped to sixth in the process. The competition yellow became Andrew’s best friend. He was able to catch up with the field and get a strong restart in the process. Andrew overcame adversity and won the race, his second in a row for Traxxas. Luke Johnson had a great finish for Traxxas, ending up second to Andrew.

In PRO 2 Bryce Menzies had a point to prove on Saturday night after his mistake Friday cost him the win. His truck was dialed in, but he had to best Chad Hord, CJ Greaves, and Jeff Kincaid. The entire race was filled with crashes, flips, and mistakes, all of which proved to be exciting for the fans. Bryce Menzies kept his Red Bull Ram pointed the right direction this time and won the race. CJ Greaves managed to put his Monster Energy Tundra on the Podium yet again finishing third. Traxxas Jeff Kincaid finished fourth after an early race spin set him far back in the field.

The Traxxas TORC Series brought out the big dogs for the final race of the weekend. Pro 4 ended up being a memorable battle between Ricky Johnson and Traxxas’ Mark Jenkins. Ricky was fast, but Mark was right there and stole the lead for a brief moment. Mark Jenkins was able to keep pace but brushed the wall on the backstretch after an off-center landing. He continued, but his truck was badly damaged. Without the pressure from Mark Jenkins, Johnson had smooth sailing from there on out taking home the win for a second night in a row. Adrian Cenni and Scott Douglas rounded out the podium. Mark Jenkins ended up fifth, crossing the line with a broken upper control arm!

After all the weekend’s extraordinary on-track action, TORC fans are hungry for more. Don’t miss out. The next stop for the full-contact race series is Buchanan, Michigan’s Red Bud Raceway on May 26-27. Mark your calendars and reserve your tickets at www.torcseries.com. If you can’t make it out, catch all of the action on www.facebook.com/traxxasracing or follow us on Twitter. Be sure to watch the Traxxas TORC Series on Speed Channel this fall.