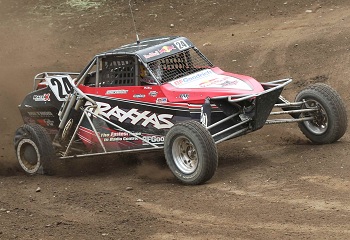 Red Bud, the world-famous motocross track played host to a very different style of racing this past weekend as the Traxxas TORC Series, presented by Amsoil, stormed into town. TORC rounds 3 and 4 were held on a specially built off-road track that wound through the hills, valleys, and trees of the Buchanan, MI racing complex. Battle hungry race trucks shredded berms, whoops, and each other as drivers tried to force their way to the front on the difficult-to-pass racetrack. And Traxxas was there in full force.

On Saturday the weather conditions were perfect for racing. Traxxas Superbuggy driver Mitchell DeJong started the ball rolling by leading most of his race until being slowed by a flat right rear tire in the closing laps. Fourteen year-old DeJong fought through it, but had to settle for a still respectable third place. This was Traxxas’ first podium of the weekend, but it certainly wasn’t the last!

In PRO Light Andrew Caddell had qualified his Ram/MOPAR Traxxas truck third. But he had better things in mind and battled his way to the front of the pack. Caddell held off a late charge from CJ Greaves to finish first. Traxxas driver Luke Johnson rounded out the top three with a solid third place, his second podium of the season. Look for Johnson to be a factor all season long! Traxxas’ Keegan Kincaid finished a strong fourth, meaning Traxxas drivers were three of the top four!

PRO 2WD roared onto the course next, with 10 mud-slinging, power-sliding trucks looking to win the day. Traxxas drivers made up nearly a third of the field, with three 900hp race trucks looking for a fight. Traxxas’ Rob MacCachren started third behind pole-winner Bryce Menzies and CJ Greaves. MacCachren blasted through the pack early, quickly doing away with Menzies and Greaves. After the competition yellow at the halfway point, MacCachren drove his #21 Ram/MOPAR truck around then-leader Chad Hord and never looked back. Rob finished on the top step and managed to add another fast-lap Oakley Bomb award to his trophy shelf. Traxxas’ own Mike Jenkins finished well inside the top ten with a strong seventh. Luck wasn’t smiling on Traxxas driver Jeff Kincaid, as he was sidelined early with mechanical issues.

Saturday’s final race brought out the big dawgs, TORC’s 900+ horsepower, four-wheel drive monsters! Fans may have thought they were seeing double as Traxxas driver Mike Jenkins jumped out of his PRO 2WD and right into his PRO 4X4. Yes, that’s right… Mike Jenkins is doing double duty this season racing BOTH of TORC’s premier classes. Mike drove hard, finishing fifth after brawling with his brother in the opening laps. And speaking of his brother, the crowd held its collective breath as Mark Jenkins’ #25 Traxxas racetruck was hit by #11 Adrian Cenni and sent tumbling over the concrete barrier in the closing laps. Mark was sore but uninjured, and felt confident that the Jenkins Brothers Racing crew would get his truck repaired for Sunday’s round. Round 3 of TORC PRO 4X4 was ultimately won by motocross legend Ricky Johnson. Ricky also received the Oakley Bomb for fast lap of the race.

Sunday again brought beautiful clear skies, and promised some amazing short course off-road racing action. And the fans at Red Bud were not disappointed! In Superbuggy, Traxxas’ 14 year-old Mitchell DeJong put in a dominating performance. TORC inverted the top finishers of Round 3 to determine starting positions for Sunday. That put DeJong a few rows back, but that didn’t last long. By lap three, he had the Traxxas Superbuggy out in front. From there it was all pace management for him, easily cruising to a victory. Even a broken rear swaybar, discovered after the race, wasn’t enough to keep young Mitchell from the top of the podium.

PRO Light again had three Traxxas drivers in the field. Following his win of the previous day, the inverted start had Andrew Caddell’s Ram/MOPAR starting farther back in the pack. What was worse, by race time, the already-run six Sportsman races had worn a serious groove into the Red Bud short course. That made it a nearly impossible to pass on, one-line racetrack. Caddell was mired down mid-pack for most of the race. But a hard charge after the competition yellow netted him a third place finish. Traxxas drivers Luke Johnson and Keegan Kincaid finished fifth and sixth, respectively. Brad Lovell got his first PRO Light win, and CJ Greaves was P2.

In PRO 2WD, the one-line track also fettered Rob MacCachren, holding him to a third place finish. Rob almost missed the podium entirely, but a mistake CJ Greaves on the white flag lap, coupled with a wily move by the veteran MacCachren put the #21 Traxxas Ram/MOPAR on the third place step. Mike Jenkins had a great race with the # 76 Andy Zipperer, beating him to an eighth place finish. And again, Red Bud wasn’t kind to Jeff Kincaid, who again had a mechanical and finished tenth, six laps down.

The last race of the weekend was again PRO 4X4. Mike and Mark Jenkins led the field to the green flag. Mark got away early and dominated the first half of the race, hounded by Adrian Cenni throughout. Mike Jenkins’ #47 truck unfortunately was sidelined early, ending his Red Bud weekend. At the competition restart, second place Cenni held off a charge by Ricky Johnson, then a few laps later got by Mark Jenkins with a clean pass. Moments later, Cenni lost control of his truck in the downhill sweeper, the same spot he’d hit Mark the day before. Cenni rolled over, but amazingly landed on his wheels and continued, albeit with almost no body panels remaining! The rollover allowed Mark Jenkins to get by. Cenni then lived up to his “Wildman” moniker and gave chase, coming along side Jenkins on the front straight.

Unfortunately, Mark’s truck chose that spot to break a right front spindle, ending what was surely the best drive of his PRO 4X4 career and a certain podium finish. These shenanigans let Ricky Johnson sneak by and into the lead, where he would ultimately finish the race, making it eight victories in a row! Oakley Bomb recipient Cenni, with Scott Douglas surviving to finish third, rounded out the podium.

Up next for the Traxxas TORC Series… Crandon Raceway!

Fans attending next month’s (June 16-17) annual Brush Run at Crandon International Off-Road Raceway are in for a big time additional treat as the wild open wheel ‘moon buggy’-style vehicles that compete on the Ultra 4 Series, popularized by the annual “King of the Hammers” race, will line up and race the Brush Run both Saturday and Sunday at Crandon.