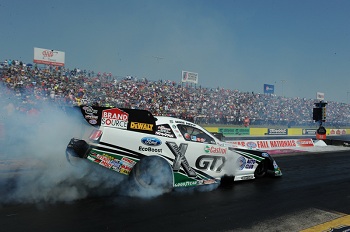 It was a steamy day at the AAA Texas NHRA Fall Nationals with temperatures soaring to over 90 degrees. The tough conditions contributed to the early exits by all four John Force Racing Ford Mustangs with Mike Neff and Courtney Force advancing the furthest reaching the quarterfinals today at Texas Motorplex.

As the No. 1 qualifier Courtney Force and the Traxxas Ford Mustang had lane choice and outran No. 16 qualifier Todd Lesenko in the opening round. In the second round against Ford Racing teammate Bob Tasca III, Force surprisingly smoked the tires and had to watch as Tasca pulled away for the second round win. Force will stay in the No. 6 position in Full Throttle points just four points behind teammate Robert Hight.

“We were trying to make a decent pass down there and we thought the track could hold a run like a 4.18. We thought it was as good as Q1 yesterday. We tried to go after a run like that. Unfortunately, the track wasn’t good for that kind of run. It was a hot track. It spun the tires at the other end. It wasn’t what we expected out of it. We were hoping to get that win especially being out there in front of him,” said Courtney.

“We have a good car. We keep getting some bad luck in eliminations but we are doing great in eliminations. Maybe everyone is stepping it up because we are showing we have a good car. We have a competitive Mustang. I feel like we are a car to beat out here. We have been the No. 1 qualifier two times in the last three races. We just pushed it a little hard for this track on that run and it made us spin the tires. We will get back after it next weekend. We picked up a lot of points in qualifying.”

Mike Neff and the Castrol GTX Ford Mustang looked like the combination to beat after a strong first round win over Tony Pedregon when the driver/crew chief posted a 4.107 second ET. Unfortunately for Neff he had to face the quickest first round Funny Car, Cruz Pedregon’s Snap-On Toyota, in the second round. Without lane choice since Pedregon posted the quickest run of the opening session, 4.105 seconds, Neff was forced to the tricky right lane. In the second round Pedregon ran 4.169 seconds to Neff’s solid 4.186 second pass, which was the best pass by far in the right lane.

“That run was exactly what I expected. I wanted to run around a 4.18 and we did. I was betting that we needed to make a good clean run and hope that they made a mistake. They made a better run and that is how it shakes out sometimes. I am feeling really good about this Castrol GTX Ford Mustang. We made two good runs in the heat today,” said Neff.

Neff will hold onto the No. 2 position in the Full Throttle Funny Car standings. Full Throttle point leader Ron Capps was upended by teammate Matt Hagan in the semi-finals and only leads Neff by 96 points. With four races remaining in the Countdown to the Championship Neff knows that the upcoming events in St. Louis and Reading will critical to his success.

The day after he picked up the $100,000 check for winning the Traxxas Nitro Shootout John Force was narrowly outrun by last year’s Funny Car champion and eventual AAA Texas NHRA Fall Nationals finalist Matt Hagan in the first round. Force did not have lane choice and his Castrol GTX HIGH MILEAGE Ford Mustang crossed the finish line with a time of 4.225 seconds, just a tick off his winning time from the Traxxas Shootout as Hagan tripped the lights in 4.134 seconds.

Robert Hight and the AAA Insurance Ford Mustang struggled in qualifying and had to try and upset No. 2 qualifier Tim Wilkerson in the first round. It was too much for Hight and the Jimmy Prock tuned Mustang as Wilkerson pulled away before blowing up at the top end. Wilkerson had enough of a lead to hold Hight at the finish line.

“No doubt this was a tough weekend. We struggled but Jimmy and I are going to test tomorrow and we will get this AAA Insurance Ford Mustang right for the last four races. We are not out of this championship Countdown yet by a long shot. We had a tough first round opponent in Tim Wilkerson and the key for our success is to qualify in the top half and control our own destiny,” said Hight.

Hight and the AAA Insurance Ford Mustang team will return to Texas Motorplex for a full day of testing as they try and reel in the drivers in front of them in the Full Throttle point standings.